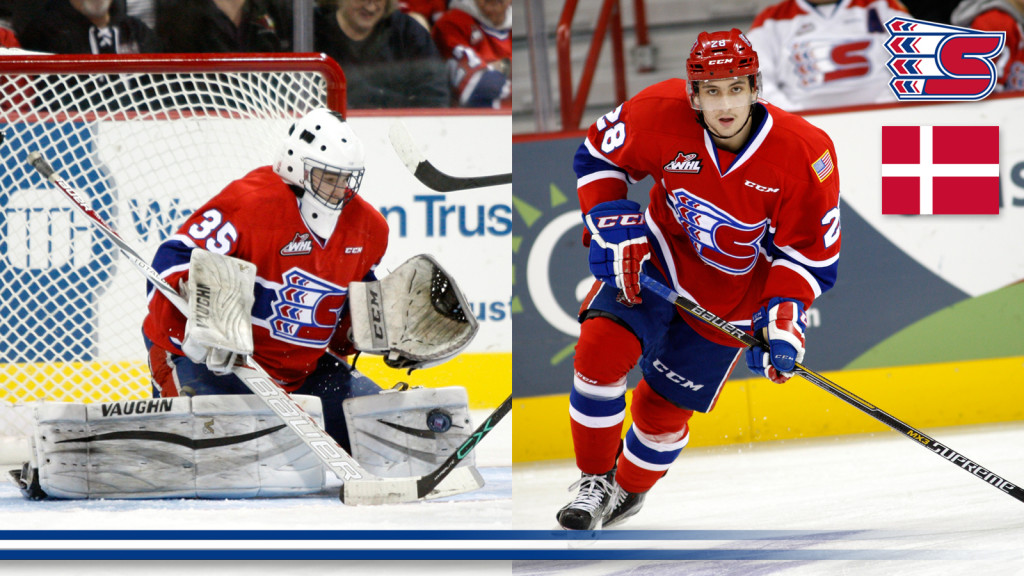 SPOKANE, Wash. – Spokane Chiefs forward Niklas Andersen and goaltender Lasse Petersen have each been selected to represent Denmark in the upcoming 2016 IIHF World Junior Championship from December 26 to January 5 in Helsinki, Finland. The Danish team’s preliminary roster of 30 players – which will be reduced to 26 later this month – was announced earlier today. Denmark opens their tournament schedule on Sunday, Dec. 27 versus Switzerland.

“The World Junior Championship will be a fantastic opportunity for Niklas and Lasse,” said Chiefs General Manager Tim Speltz. “It is always an honor for players to represent their country in international competition.

“The tournament is great for player development both on the ice and also personally. We wish them the best.”

Andersen, from Esbjerg, Denmark, was the Chiefs’ first round selection (26th overall) in the 2015 CHL Import Draft. In 22 games played, the left winger has five goals and six assists.

Petersen was claimed off waivers by the Chiefs on November 5 and has appeared in four games, winning twice while posting a 2.66 goals against average and .899 save percentage, including one shutout. He appeared in seven games with the Calgary Hitmen earlier this season and allowed 3.13 goals per game with a shutout. Petersen calls Swan River, Man. home, but was born in Denmark.

Team Denmark is in Group A along with Canada, Sweden, the United States, and Switzerland. They are expected to trim their current preliminary roster of 30 down to the final 26 following their training camp in Huddinge, Sweden from December 16-19. Denmark faces Team Canada, managed in part by Speltz, on Monday, Dec. 28. They face Team USA on New Year’s Eve.

Should they make the final cut after training camp, both players will miss eight games while playing for their country, beginning with the Chiefs’ game versus Everett on December 16. They are expected to rejoin the Chiefs for their January 9 game versus the Regina Pats at Spokane Arena.

Tickets for all Chiefs home games are available online via TicketsWest at www.ticketswest.com or over the phone at 509-535-PUCK.