ANDERSON-DOLAN STEALS THE SHOW, LEADS CHIEFS FROM BEHIND 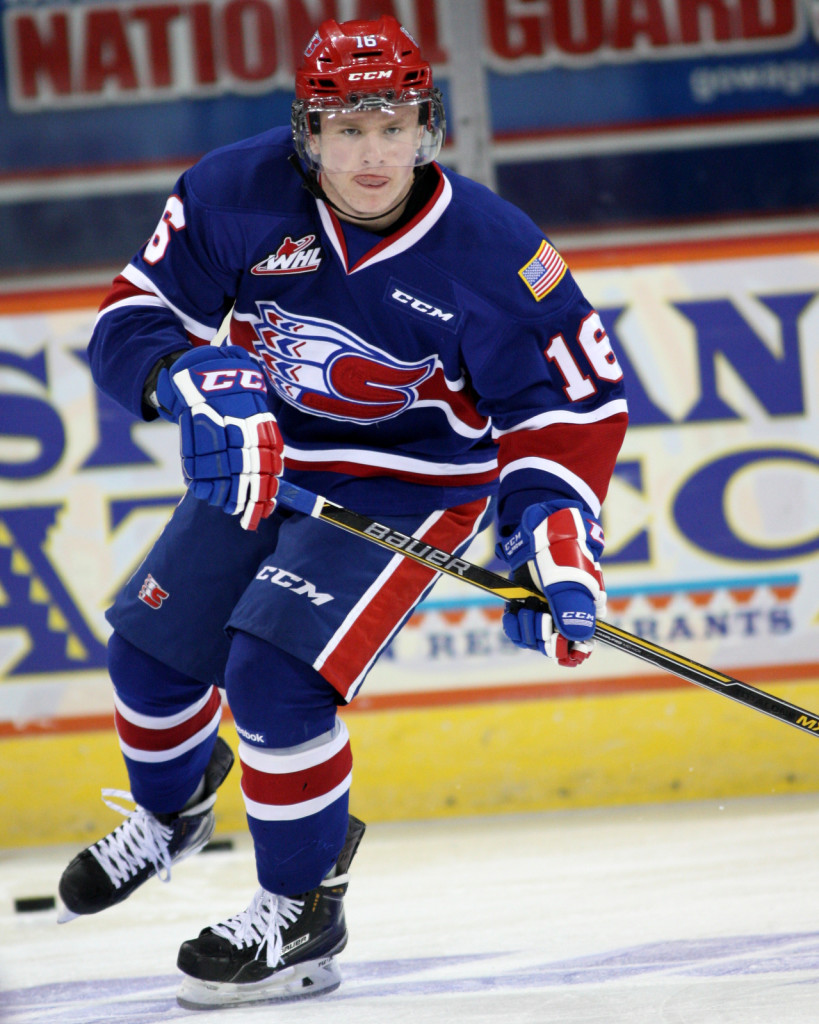 SPOKANE, Wash. – Rookie forward Jaret Anderson-Dolan picked an opportune time to score the first three goals of his young WHL career, netting a hat trick to lead the Spokane Chiefs to a come-from-behind 6-4 win over the rival Tri-City Americans on Saturday Night at Spokane Arena.

Forward Hudson Elynuik earned the distinction of scoring the Chiefs’ first goal of the 2015-16 regular season, punching in a rebound opportunity just 1:14 into regulation to put the Chiefs up 1-0. Kailer Yamamoto and returning captain Jason Fram earned assists.

After goals from the Americans’ Parker Bowles and Jordan Topping put the Chiefs behind 2-1, Anderson-Dolan’s first of the night and first of his career tied the game and brought energy back to the raucous crowd of 8,345. The center from Calgary, Alta. sniped one over Tri-City goaltender Evan Sarthou’s shoulder from the left wing with just seconds remaining on one of the Chiefs’ six power play opportunities.

Tyler Sandhu responded swiftly for the Americans, scoring back-to-back goals at the 8:01 and 10:35 of the second period to put the Chiefs behind 4-2.

Fram scored his first of the season with 4:38 remaining in the middle frame to bring the Chiefs back within one goal, sweeping in a rebound opportunity created off a Matt Sozanski shot.

Anderson-Dolan took over in the third period, beginning with laser of a wrist shot from the high slot to tie the game at just the 1:51 mark, off an assist from fellow rookie Jeff Faith.

The hats came raining onto the ice at the 14:13 mark of the third as Anderson-Dolan took a feed from Markson Bechtold and snapped a shot just inside the top-left corner to beat Sarthou and put the Chiefs ahead for good. Overage forward Riley Whittingham also earned an assist on the power play tally.

Yamamoto, a year removed from earning Western Conference Rookie of the Year honors, took full advantage of a breakaway opportunity created by a Dominic Zwerger outlet pass, providing an insurance goal to put the Chiefs up 6-4.

The victory was Head Coach Don Nachbaur’s 633rd including sixth straight wins in the Chiefs’ home opener. The Chiefs have now won eight straight home openers, all against the Americans, dating back to 2008.

Spokane took better advantage of a heavily penalized game, scoring on 2-of-6 power play opportunities while holding the Americans scoreless on seven.

The Chiefs hit the road for their next six games, beginning Friday, Oct. 2 in Cranbrook, B.C. to face the Kootenay Ice. They next return home on Friday, Oct. 16 to take on the Prince Albert Raiders on Cenex Zip Trip Magnet Schedule Giveaway Night at Spokane Arena.

Tickets for the Oct. 16 game and all Chiefs home games are available now on www.ticketswest.com and at 800-325-SEAT. Ticket packages and group opportunities are also available via the Chiefs’ Ticket Office and over-the-phone at 509-535-PUCK.