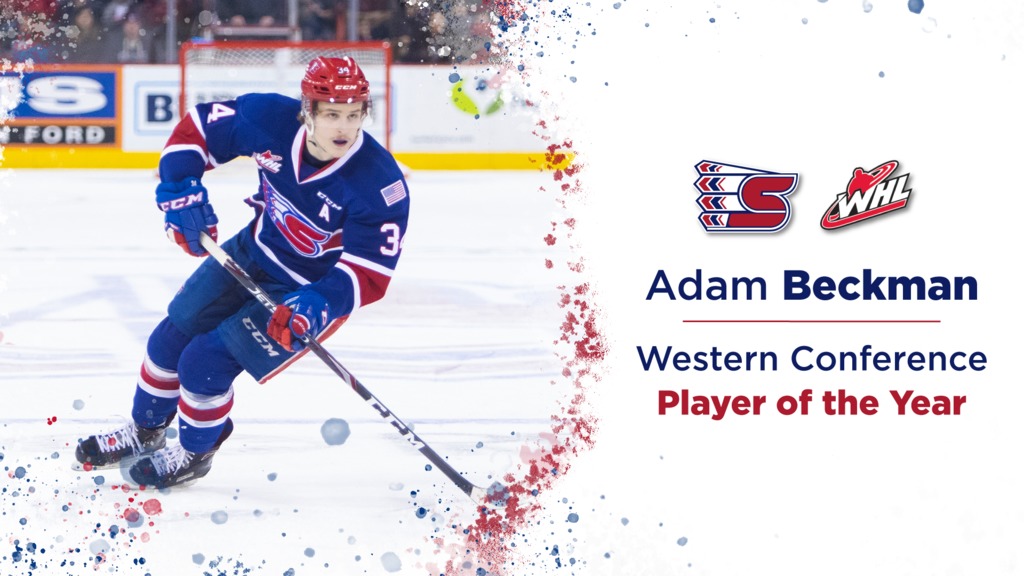 Spokane, Wash. — Spokane Chiefs forward and Minnesota Wild prospect Adam Beckman has been named the Western Hockey League’s Western Conference Player of the Year, as announced by the league on Tuesday. He is one of two finalists – joining Dylan Cozens of the Lethbridge Hurricanes – for the Four Broncos Memorial Trophy, awarded annually to the league’s top player.

He is the first Spokane player to eclipse the 100-point mark since “Top 35 Chiefs in 35 Years” member Mitch Holmberg led the league in 2013-14. Beckman, Holmberg and Tyler Johnson (2010-11) are the only Chiefs to make the century club since 1994. Beckman was the only player in the league to the milestone this season.

He is the first Chief to lead the team in goals for two consecutive seasons since Drayson Bowman did so in during the 2007-08 (42) and 2008-09 (47) campaigns. Beckman scored 32 to lead the club last season on his way to the team’s Rookie of the Year award.

Beckman set a new franchise record in December and January, scoring a goal in 10 consecutive games. The frenzy was part of a league-best 18-game point streak, one greater than teammate Eli Zummack’s 17-gamer.

Selected by Minnesota in the third round of the 2019 NHL Entry Draft and signed to an entry-level contract late last month, Beckman posted eight multi-goal games during the 2o19-20 season, including three hat tricks. He had three five-point efforts and 14 games with three or more points. During the Chiefs’ 10-game win streak to finish the year, he posted nine goals and 10 assists for 19 points.

Beckman was twice selected as the WHL’s On The Run Player of the Week and earned the league’s Player of the Month distinction for his production in December. He was originally a fifth-round selection (96th overall) by the Chiefs in the 2016 WHL Bantam Draft.

With 169 points (80G-89A) in 132 career regular season games, he ranks 10th in franchise history in points per game at 1.28. In 15 career playoff games, he has contributed eight goals and four assists for 12 points.