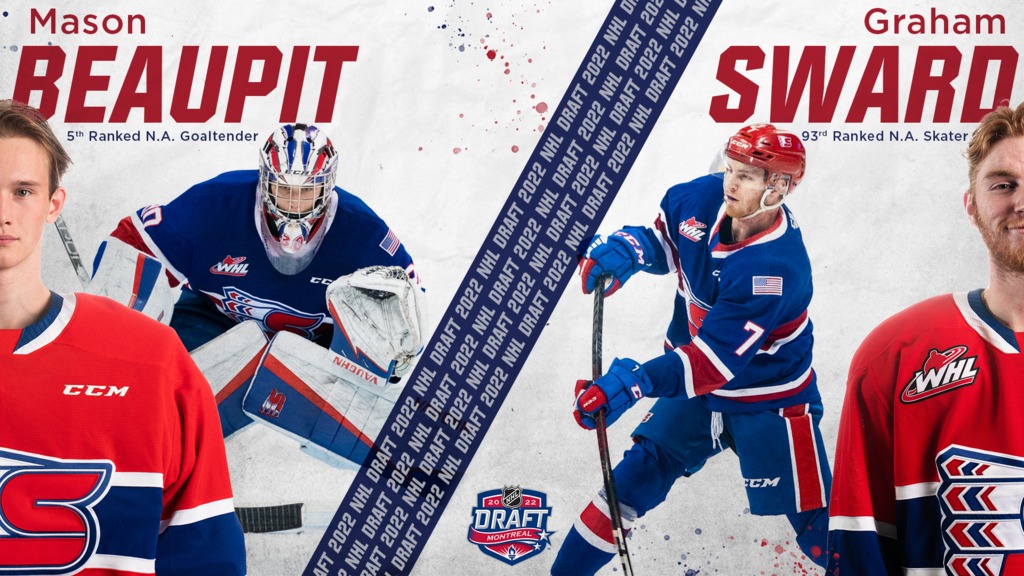 Montreal, Que. — Spokane Chiefs Mason Beaupit and Graham Sward will hope to hear their names called this week in the 60th annual NHL Entry Draft. The event will take place on July 7-8 at the Bell Centre in Montreal, Quebec, with the hosting Montreal Canadiens holding the first overall pick. The first round will take place Thursday, July 7 with rounds two through six going through Friday, July 8.

Beaupit, a 6-foot-5 goalie out of Surrey, B.C., heads into the draft ranked 5th among North American goaltenders by the NHL Central Scouting Service after being named the Spokane Chiefs Player of the Year for the 2021-22 season. He finished the season 20-22-3-1 with a 3.63 GAA and .893 SV%.

The 18-year-old was on the winning side at the CHL’s Kubota Top Prospect Game this year, stopping all 16 shots he faced in a 3-1 decision for Team White.

Throughout the season, Beaupit faced over 40 shots on goal seven times and made 35 or more saves on 12 separate occasions, going 5-6-0-1 in those match-ups. Fifteen times this season Beaupit allowed two or fewer goals, going 11-5-0-0 in those starts.

Beaupit was the Chiefs’ fourth-round (82nd overall) pick in the 2018 WHL Draft.

Sward, a 6-foot-3 rearguard out of Abbotsford, B.C., heads into the draft ranked 93rd among North American skaters by the NHL CSS after finishing his third season as a Chief with a career-high 10 goals, 33 assists and 43 points in 57 games.

The Chiefs’ 2022-23 regular season will begin on Friday, September 23 as they take on the Victoria Royals on the road before hosting the Kamloops Blazers in their home opener at Spokane Arena on October 1. Ticket packages for the 2022-23 season are available now! With options starting at just $96, there’s an option to fit every budget and schedule. For more information, visit spokanechiefs.com.