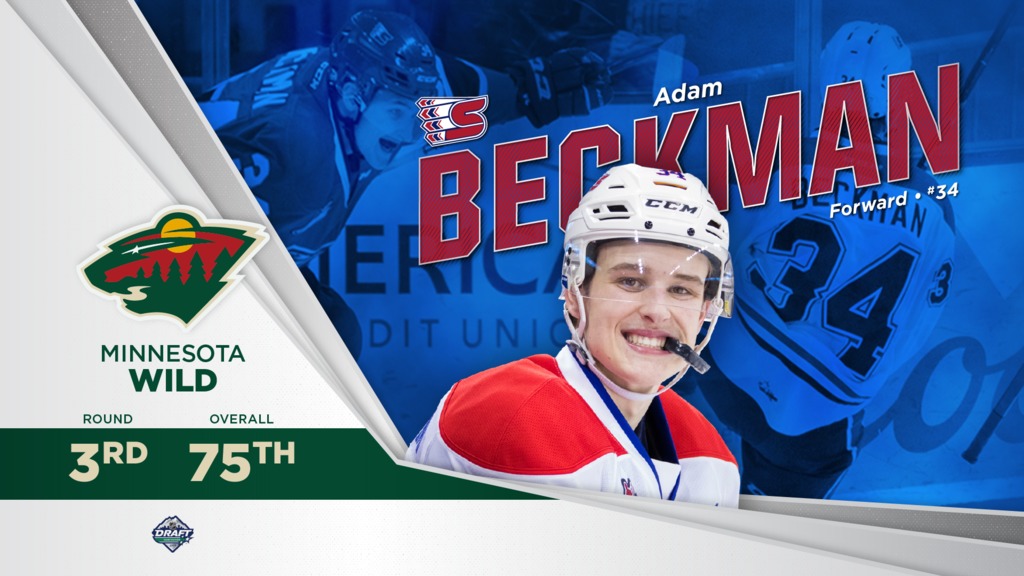 Vancouver, B.C. — Spokane Chiefs forward Adam Beckman was selected by the Minnesota Wild in the third round (75th overall) of the 2019 NHL Entry Draft on Saturday in Vancouver, B.C.

In his draft year, Beckman pounded the puck into the blue paint, leading the Chiefs with 32 goals and becoming the first rookie to lead Spokane in lamps lit since 18-year-old Czech Daniel Bohac did so back in 1998-99 (26). He ranked second among all WHL first-year players with 62 points; the most by a Spokane rookie since Roman Tvrdon put up 70 in the 1999-00 campaign. Beckman also became the first 17-year-old to lead the team in goals since eventual second-overall NHL pick Pat Falloon in 1989-90.

He recorded 13 multi-point games during the regular season, highlighted by 2G-2A performances versus Seattle on Dec. 16 and versus Victoria on March 9. He potted his first career hat trick in a 10-1 demolition of rival Tri-City on March 16.

Beckman becomes the 74th ever Chief selected in the NHL draft and 44th forward. He is the fourth Chief picked by Minnesota, joining notable former stars D Chris Heid (2001; 74th overall), G Barry Brust (2002) and D Justin Falk (2007; 110th). Chiefs fans may be familiar with the Wild already as former Chiefs defenseman Jared Spurgeon has been a mainstay on the Minnesota blue line since 2010.