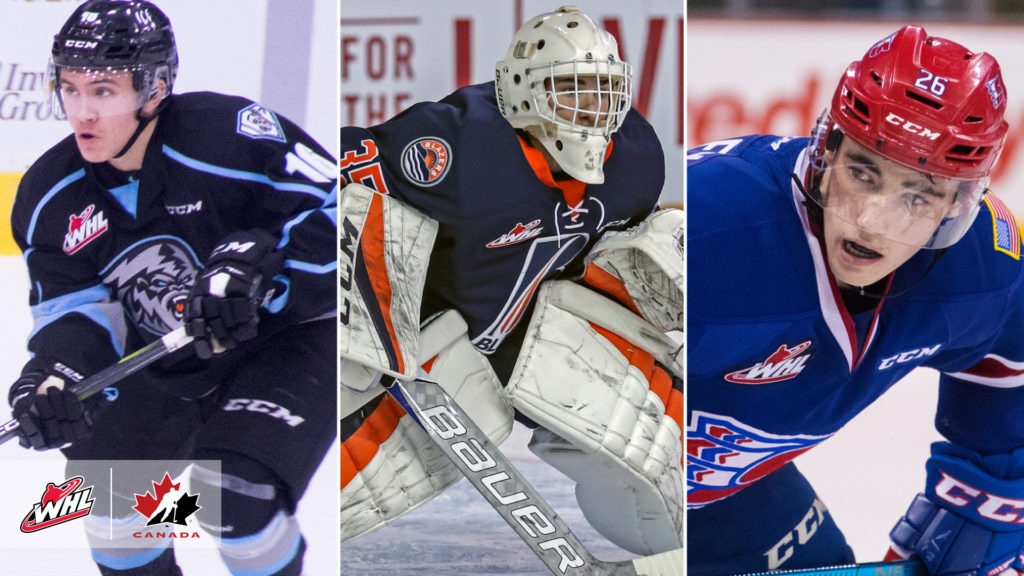 With tournament action set to kick off in less than two weeks, the three teams will match up against the Czech Republic, Finland, Russia, Sweden and the United States as they compete for a gold medal.

WHL Players at the 2018 World Under-17 Hockey Challenge:

After capturing silver at the 2017 World Under-17 Hockey Challenge, seven Western Hockey League players are set to help their Canada Red squad return to the podium and improve on their positioning. A quintet of forwards will help power the team’s offensive game, including Seth Jarvis and Justin Sourdif, who each have eight points this season already. 2017 WHL Bantam Draft first overall selection Kaiden Guhle will anchor the team’s defence while 2017 WHL Cup gold medalist Dylan Garand will battle to earn the starting job between the pipes.

Three talented forwards in Kyle Crnkovic, Jack Finley and Ozzy Wiesblatt will make Canada Black a difficult team to stop at this year’s tournament. Interestingly enough defensive prospects Aidan de la Gorgendiere and Daemon Hunt, both playing for East Division teams will play on the same team before facing each other in WHL competition. Posting a 2.82 goals-against-average and a 0.921 save percentage in five games with the Calgary AAA Buffaloes, goaltender Garin Bjorklund will be eager to bring his early success to the international level as well.

After a fourth place finish last season, Canada White will be buoyed by five WHL players. A pair of Edmonton Oil Kings players in forward Jake Neighbours and goaltender Sebastian Cossa will look to play strong roles on this year’s team. Both Connor McClennon and Luke Prokop have tallied their first career WHL goals, with McClennon recording a multi-goal game in his season debut on Sept. 22. Everett Silvertips defenceman Ronan Seeley has factored in to his team’s bid to win their third-straight U.S. Division title.

“After an exciting summer camp with 112 players gathering in Calgary and the selection of our 66-player roster last week, the unveiling of our three teams is one of the final stages as we prepare for the World Under-17 Hockey Challenge,” said McEwen. “We are fortunate to be able to assemble three competitive, skilled teams, and we believe all 66 players will represent their country with pride in this prestigious event.”

TSN and RDS, the official broadcasters for Hockey Canada, will air both semifinals on Friday, November 9, as well as the bronze- and gold-medal games on Saturday, November 10; please check local listings for details. Prior to the start of the tournament, the teams will take to the ice in four New Brunswick communities on November 1 at 7 p.m. AT for pre-tournament games.

Team Canada Black will take on Finland at the 8th Hussars Sports Centre in Sussex, N.B., Sweden will match up against the Czech Republic at the Patrick Connors Rec Complex in Blacks Harbour, N.B., Team Canada White will play Russia at the Tri-County Complex in Fredericton Junction, N.B., and Team Canada Red will face off against the United States at the Garcelon Civic Centre in St. Stephen, N.B.

Single-game tickets are now available online for as low as $13 at HockeyCanada.ca/Tickets. A Harbour Station ticket package, which includes all preliminary-round games in Saint John, as well as both semifinals and the bronze- and gold-medal games, is also being offered for $99 and can be purchased at the Harbour Station box office.

The communities of Saint John and Quispamsis will receive the net proceeds from all ticket and ticket-package sales as a legacy of the event to support grassroots hockey within their communities as part of their hosting agreement with Hockey Canada. Recent editions of the World Under-17 Hockey Challenge have resulted in as much as $6 million in economic impact within the host communities.

NEWS | The three 🇨🇦 rosters have been unveiled for #WorldU17…