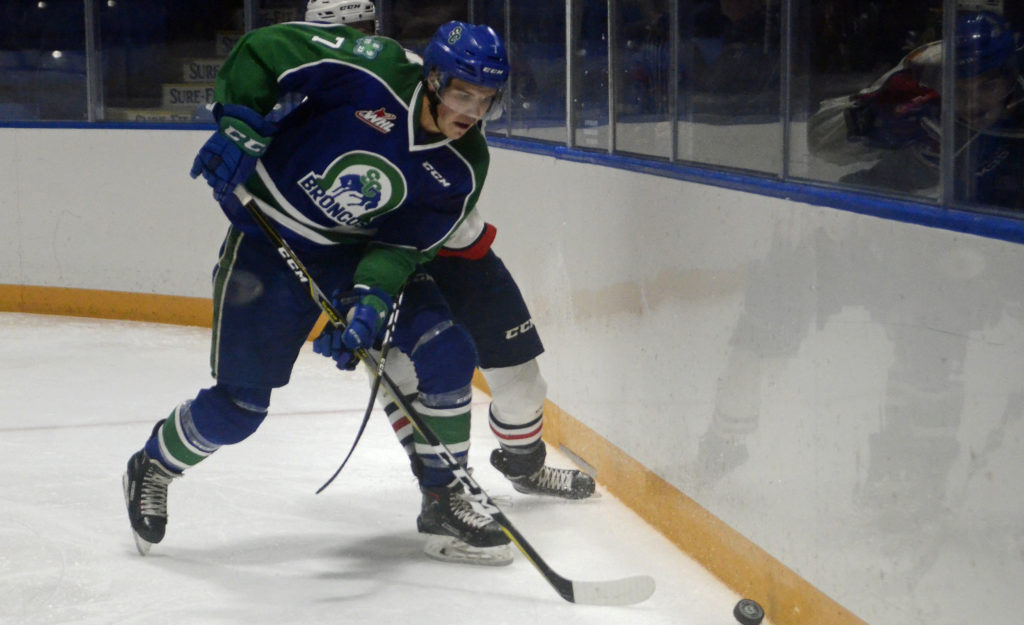 The Spokane Chiefs announced on Tuesday morning that they have acquired defenseman Noah King, the rights to goaltender Matthew Davis and a conditional 2021 bantam draft pick from the Swift Current Broncos. In exchange, the Chiefs trade forward Carter Chorney and the rights to defenseman Devin Aubin and forward Kye Buchanan.

“We are excited to add Noah, who brings size and WHL championship experience to our back end,” said Chiefs general manager Scott Carter.

“In addition, Davis is a very good young goalie that our Assistant General Manager Chris Moulton holds in high regard.”

King, a 19-year-old defenseman from Winnipeg, has two goals and four assists for six points in 25 games for the Broncos this season. The 6-foot-4, 200-pound blueliner has played 95 career WHL games, scoring two goals and 11 points. He also boasts 33 career games of WHL playoff experience, including 26 last year as the Broncos won the WHL Championship.

“Acquiring Noah is also very helpful to our defense in the short term with Ty Smith and Filip Kral both potentially playing at the World Junior Championship.”

Davis is a 2001-born goaltender currently playing for the Spruce Grove Saints of the Alberta Junior Hockey League, posting a 1.70 GAA and .925 SV% in 17 games.

“To get players like Noah and Matthew, you have to part with someone,” continued Carter. “Devin and Kye were unsigned players on our 50-man protected list. Carter has waived his no trade clause for the opportunity to be a key player up front moving forward. We wish them all the best moving forward.”

Davis, Aubin and Buchanan each have yet to sign a WHL Standard Player Agreement.

The Chiefs remain on the road Wednesday night to face the Everett Silvertips at 7:05 p.m. Mike Boyle will have the radio call on 94.1 The Bear FM beginning with the pre-game show at 6:30.

Spokane returns home for back-to-back games on December 7 and 8, including the annual Teddy Bear Toss presented by the Spokesman-Review Christmas Fund on the 8th. Fans are encouraged to bring a new or gently used stuffed animal to the game to throw on the ice after the Chiefs’ first goal. Toys will be gathered and donated to local families in need.

Tickets for all Chiefs home games are available online, over the phone at 509-535-PUCK and at the Chiefs’ Ticket Office at Spokane Arena.

5:11
Game Highlights Game Recap
Smith Breaks His Own Franchise Record in 9-2 Dismantling of Seattle
3 hours ago