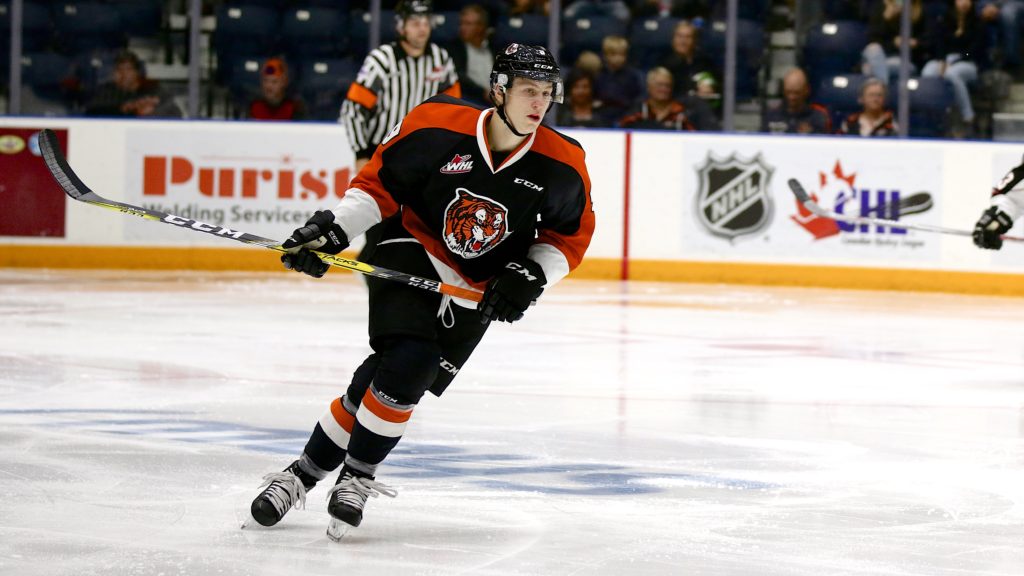 SPOKANE, Wash. – The Spokane Chiefs announced on October 19 that they have acquired 20-year-old Calgary Flames prospect Zach Fischer from the Medicine Hat Tigers in exchange for 18-year-old forward Hayden Ostir, 16-year-old defenseman prospect Eric Van Impe and a second round pick in the 2019 WHL Bantam Draft. In a corresponding move, 20-year-old forward Rykr Cole has been released to waivers.

“We are very excited to add Zach to our team,” said Chiefs’ General Manager Scott Carter. “He is a proven scorer who has strength and an edge to his game that we like. He is tough to play against and is a good leader.”

After his breakout 19-year-old season, the Calgary Flames selected the power forward with their fifth round (140th overall) pick in the 2017 NHL Entry Draft.

“When you acquire a player of Zach’s caliber, you have to give up something in return and that’s never easy,” added Carter. “Hayden and Eric were both valuable members of our organization and we wish them the best in Medicine Hat.”

Ostir, a forward from Winnipeg, scored 12 goals and 16 assists in 115 games with the Chiefs, including six points (three goals and three assists) in 10 games this season. Van Impe was the Chiefs’ second round (30th overall) pick in the 2016 WHL Bantam Draft and is currently playing for the Calgary Northstars Midget AAA team of the AMHL.

“Rykr has done everything that was asked of him here in Spokane, but unfortunately we had to release him to get under the overage limit after this trade. We hope to see him picked up by a team moving forward.”

The Chiefs host the Kamloops Blazers at Spokane Arena on Friday, October 20. It will be Coeur d’Alene Casino BINGO Night at the Arena, as fans can play along during the game to win prizes.

Tickets for Friday night and all Chiefs home games are available in-person at the Chiefs’ Ticket Office, over the phone at 509-535-PUCK or online at spokanechiefs.com.