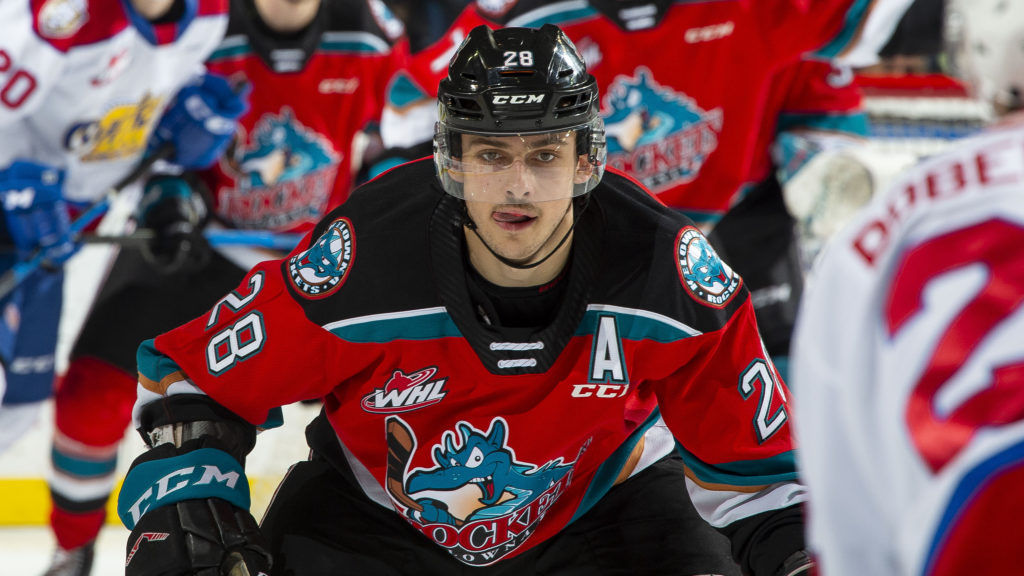 Spokane, Wash. — The Spokane Chiefs announced on Thursday that they have acquired forward Leif Mattson from the Kelowna Rockets in exchange for a third-round pick in the 2020 WHL Bantam Draft.

“This is an opportunity to add a high-caliber proven scorer to our roster,” said Chiefs’ general manager Scott Carter. “Leif has shown that he can make a big impact in our league and also proven to be a strong leader in the community. We’re very excited to welcome him to the Chiefs family.”

Mattson, a 1999-born forward from Stonewall, Manitoba, had five goals and 13 assists for 18 points in 25 games with the Rockets this season, posting seven multi-point performances.

In 203 career WHL games, the 6-foot-1 winger has registered 155 points including 61 goals. After scoring nine goals and 14 points as a 17-year-old rookie, he stacked two-straight 20-goal campaigns together over the last two campaigns, including a career-best 63 points last year (22G-41A).

Originally an eighth-round (164th overall) pick in the 2014 WHL Bantam Draft by Brandon, Mattson was narrowly passed over in the NHL draft after being ranked 157th by NHL Central Scouting coming out of his 17-year-old season. He attended Carolina Hurricanes rookie camp prior to the 2019-20 season.

During his productive WHL career, he has scored multiple goals 12 times and four points in a single game three times, including a four-assist performance versus Spokane last February.

Mattson also earned multiple team awards with the Rockets, snagging the club’s Humanitarian of the Year honor in 2018-19 and Most Sportsmanlike Player in 2017-18.

In a corresponding roster move, the team has placed forward Baron Thompson on waivers.

“We want to thank Baron for his contributions to our club,” added Carter. “Unfortunately, we’re only allowed three 20-year-old players. We wish him the best moving forward.”

Mattson is expected to join the Chiefs in time for their Friday night game at Vancouver. The traded draft pick originally belonged to the Regina Pats before being acquired by Spokane in a previous trade.

The Chiefs hit the road on Friday to take on the Vancouver Giants in Langley, B.C. Mike Boyle will have the radio call on 103.5 FM The Game, beginning with the pre-game show at 7 p.m. Puck drop is at 7:30.

Spokane returns home on Saturday for the annual Teddy Bear Toss presented by The Spokesman-Review Christmas Fund! Fans are encouraged to bring stuffed animals to throw onto the ice after the Chiefs score their first goal of the game. All donated toys are collected and distributed to Spokane families in need via The Spokesman-Review Christmas Bureau.

Tickets for Teddy Bear Toss and all Chiefs home games are available online or via the Chiefs’ Ticket Office, in-person at Spokane Arena or over the phone at 509-535-PUCK.