Chiefs bounce back with dominant 10-4 victory over Portland 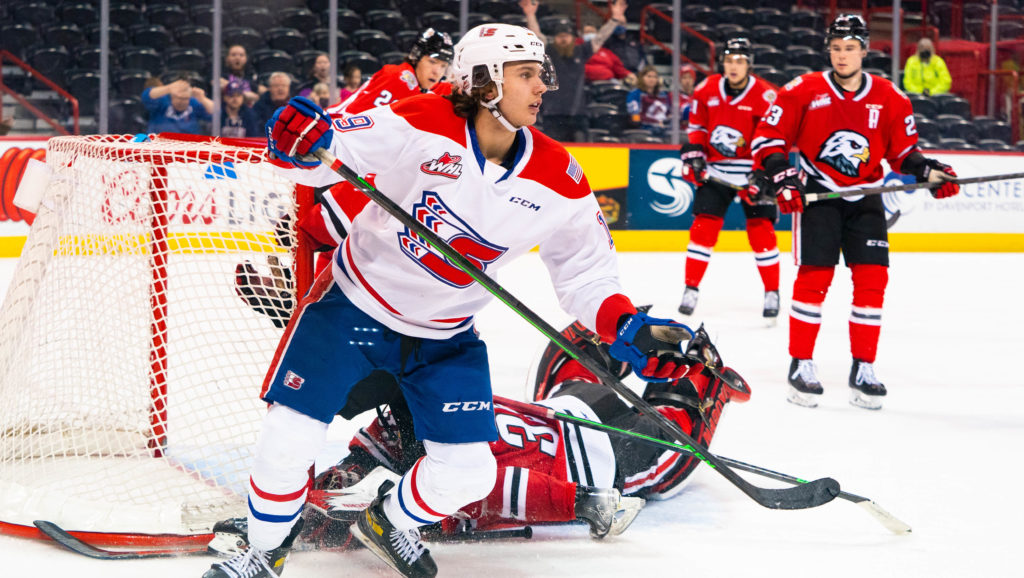 Kennewick, Wash. – The Spokane Chiefs came out on top in Friday night’s pre-season rematch against the Portland Winterhawks with a strong 10-4 victory that saw seven different Chiefs score.

Portland was hot out the gate and scored their first goal of the game at 2:33 in the first period (Cole Cairns). It was quickly followed by three Spokane goals at 3:44 (Tommaso De Luca from Will McIsaac and Erik Atchison), 5:09 (Ty Cheveldayoff power play goal from Berkly Catton and Raegan Wiles) and 5:26 (Luka Shcherbyna from Carter Streek and Saige Weinstein).

The Winterhawks closed the period with two goals of their own, both from Luca Cagnoni, to even the score at 3 apiece heading into the break.

Spokane opened the scoring in the second period with an unassisted goal from Saige Weinstein at 2:17, followed by De Luca’s second of the game (assists to Wiles and Grady Lane). Catton then found the net at 4:10 for his second goal of the pre-season to take a 5-3 lead (assists to Kooper Gizowski and Cheveldayoff).

Portland added a fourth goal at 11:40 (Josh Zakreski from Cagnoni and Robbie Fromm-Delorme), but that’s as close as they’d get.

Jake Gudelj notched his first goal of the pre-season at 18:25 in the second with help from Weinstein and De Luca to make it 7-4 heading into the final frame.

The Chiefs tacked on three more goals in the third period as rookie Will Jamieson scored his first of the pre-season (assist to Wiles). Cheveldayoff added another power play goal at 5:40 (assists to De Luca and Wiles), followed by Weinstein’s second goal of the game (assist to Lane) to seal the 10-4 victory.

De Luca, Weinstein and Wiles finished with four points each, while Cheveldayoff capped his night with three and Catton and Lane each notched two points.

Manny Panghli held it down in net for Spokane for all 60 minutes, turning aside 22-of-26 shots.

Up next, Spokane will close out its pre-season slate with a game against the rival Tri-City Americans on Sunday afternoon at 2:05 p.m.