Chiefs Fall to Ams in Rare 4-on-4 Preseason Contest 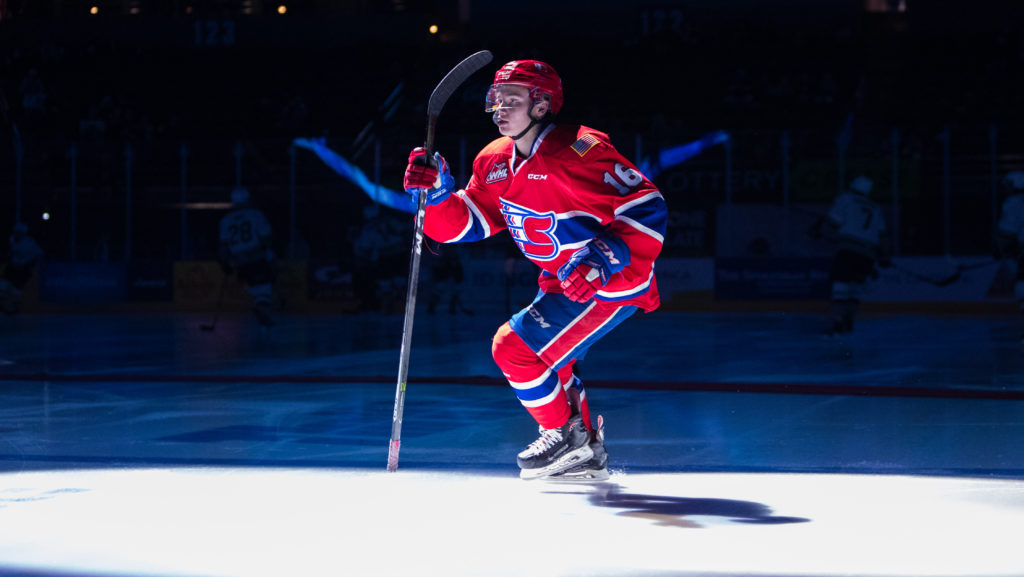 Kennewick, Wash. — The Spokane Chiefs fell 4-1 to the Tri-City Americans in the penultimate game of their 2019 WHL Preseason schedule on Saturday night in Kennewick. In a rare situation, both teams played 4-on-4 for the entire game due to the Chiefs’ lack of available players.

With eight rostered players at NHL rookie tournaments or development camps and some unexpected injuries sustained on Friday versus Portland, the Chiefs entered the game with only 14 available skaters and two goalies. Of the 14, just three were natural defenseman – 2000-born Luke Gallagher, 2001-born Jordan Chudley and 2002-born Raegan Wiles in just his second WHL game of any kind.

Due to players being away at development camps and out with unexpected injuries, the @spokanechiefs are unable to dress a full roster. Therefore, tonight’s game will be played four-on-four per @TheWHL office authorization.#AmsNation pic.twitter.com/Iu0mdip6fB

The shorthanded Chiefs were able to hold their own through two periods, outshooting the Americans through 40 minutes, 30-20. However, Tri-City forward Samuel Huo was the only player to find the back of the net, giving the hosting Ams a 1-0 lead with two minutes left in the first. Neither team scored in the middle frame.

Second-year Tri-City center Kaden Kohle scored his first of the preseason at 6:56 of the third to make it 2-0 before Huo struck again at 11:49 to push the lead to 3-0. Winger Nikita Krivokrasov added on to make it a four-goal game with under two minutes left.

Cordel Larson found the net for the second night in a row to give the Chiefs a goal, scoring with just 35 seconds remaining in regulation. Prospect forward Ben Thornton – who was selected by the Chiefs in the first round of the 2019 WHL Bantam Draft – picked up his first point in a Spokane jersey with the helper on the play.

Campbell Arnold started in goal for Spokane and made 17 saves on 18 shots faced in 28:45. Youngster Mason Beaupit came on for a schedule switch at 8:45 of the second period and played the rest of the game, turning aside 9 of 12 shots. Talyn Boyko earned the starting nod for Tri-City and was perfect on 23 shots faced before also subbing out at 28:45, allowing rookie Mason Dunsford to close it out with 20 saves on 21 faced.

Spokane finished the game 0-for-3 on the power play and 4-for-4 on the penalty kill.

These two teams will meet again for the Chiefs’ final preseason game of 2019, again in Kennewick on Saturday, Sept. 13 at 7:05 p.m.