Chiefs fall to Kelowna Rockets 10-3 on the road Friday 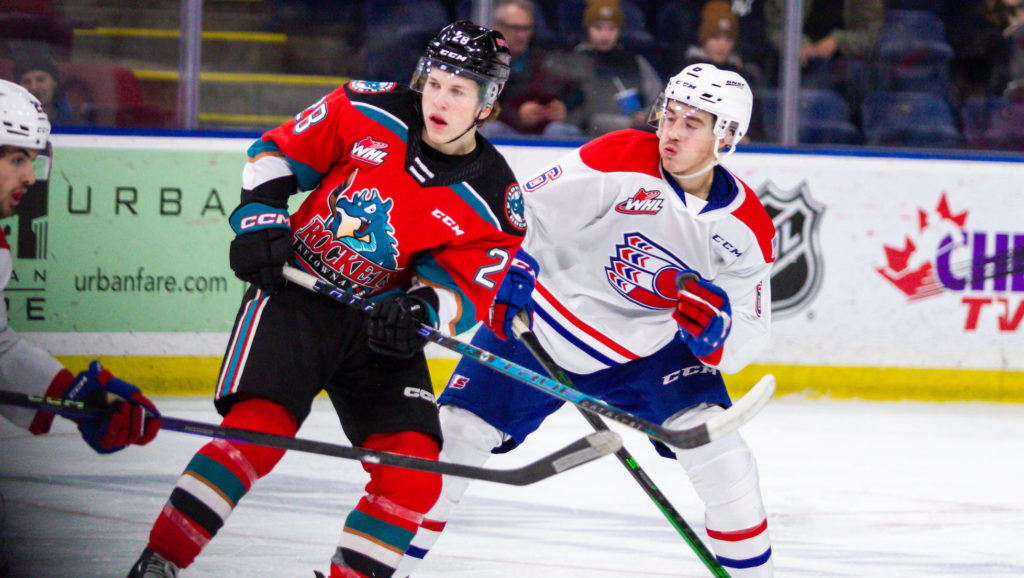 Kelowna, B.C. — The Spokane Chiefs fell to the Kelowna Rockets 10-3 on the road Friday night.

The Rockets put up three unanswered goals in the first period, starting with a power play goal by Gabriel Szturc at 7:19. Andrew Cristall followed that up with his 13th of the season at 14:55, and Marcus Pacheco got his first of the night with 57 seconds left in the frame.

Kelowna stayed in control for much of the first half of the second period, with Colton Dach, Grady Lenton and Cristall all finding the twine.

Spokane answered at 8:42 as Chase Bertholet dropped the puck behind him during a rush to the net and connected with Ty Cheveldayoff, who fired the one-timer into the back of the net and made it 6-1.

A beauty of a feed from Bertholet gives Cheveldayoff the one-timer to get us on the board!#GoChiefsGo pic.twitter.com/cy3BAduVdX

Pacheco notched his second goal of the game on another Kelowna power play at 14:18 to pad the Rockets’ lead to 7-1.

This time it was Berkly Catton who put one on the board for Spokane, as he drilled the puck into the net from the right circle. It was Catton’s first game back with the Chiefs since helping Team Canada Red earn a silver medal at the World U-17 Hockey Challenge last week.

It was the Chiefs who opened the scoring in the final frame, with Jake Gudelj scoring his fourth goal of the season with help from defenseman Brayden Crampton and rookie forward Tommaso De Luca at 9:38 to make it 7-3.

But that’s as close as Spokane would get, as Kelowna put up three more unanswered goals in the last eight minutes of the game.

Cooper Michaluk started in net for the Chiefs, turning away 13-of-18 before being relieved by Spokane’s newest netminder Dawson Cowan in the second period. Cowan stopped 20-of-25 shots.

Up next, the Chiefs will host the Calgary Hitmen at Spokane Arena on Saturday night at 6:05 p.m. It’s the first time the Hitmen have traveled to Spokane since the 2018-19 season.

The Chiefs’ next home game is Saturday, November 19 versus the Calgary Hitmen. It’s Fred Meyer Shop With The Chiefs — one lucky fan will walk away with a $1,000 shopping spree to Fred Meyer! Tickets for November 19 and all regular season games are available online at spokanechiefs.com/tickets.