Chiefs fall to rival Americans 4-2 on the road 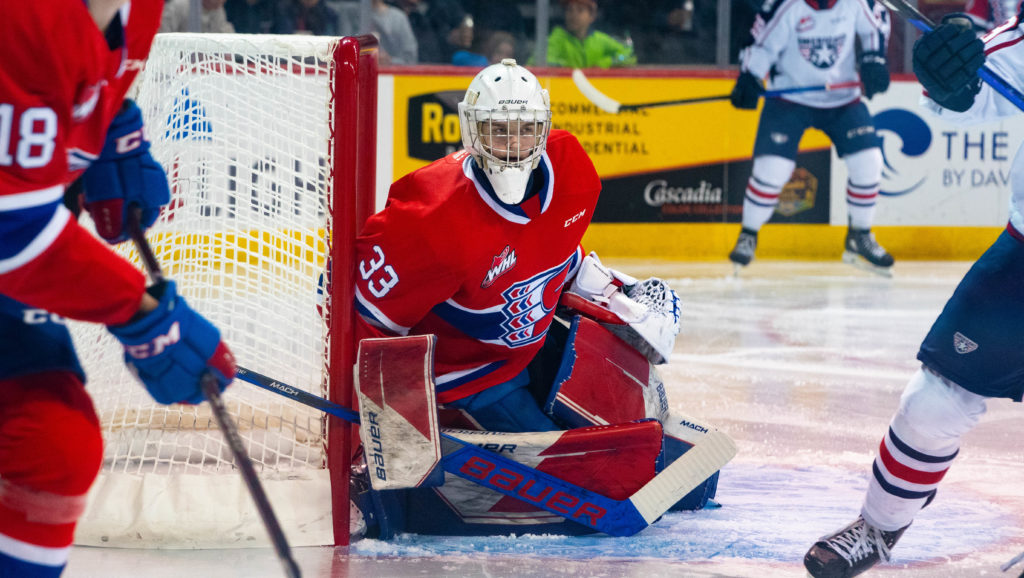 Kennewick, Wash. – The Spokane Chiefs struggled to generate offense against the rival Tri-City Americans Saturday night, falling 4-2 on the road.

Carter Streek stayed hot as he opened the scoring less than three minutes into the game with his third goal in as many games (assists: Raegan Wiles, Berkly Catton). The goal marked Streek’s sixth of the season and his seventh point in the last seven games (6G-1A).

That’s 3 goals in 3 straight games for Carter Streek! Apples for Raegan Wiles and Berkly Catton, we’re up 1-0 at 2:58!#GoChiefsGo pic.twitter.com/6M2CiMK0hG

But the Chiefs wouldn’t find the net again until the third period, allowing two Tri-City goals in the first and two in the second.

Parker Bell tied things up for the Americans at 9:39 in the first period on a power play goal, followed by Reese Belton’s fourth of the year with 57 seconds left in the frame.

Bell notched his second of the night at 7:23 in the second period and Ethan Ernst backed it up after a battle in front of the net at 15:52 to make it 4-1 heading into the final frame.

Spokane showed some fight at 7:17 in the third as Catton got a beautiful one-handed feed across the middle to Chase Bertholet who found the twine for his eighth goal of the year to bring the Chiefs within two. Tommaso De Luca also earned an assist on the play, but it’s as close as the Chiefs would get as Tomas Suchanek shut out the rest of the period.

On the other side of the ice, Cooper Michaluk stopped 26-of-30 shots through his 59:09 played.

Up next, the Chiefs will head back home to host the Everett Silvertips on Sunday, November 27 at 5:05 p.m. It’s the Winter Warmth Clothing Drive! The Chiefs are encouraging fans to bring winter hats, coats, gloves and more to the Chiefs’ Ticket Office during regular business hours or to the game. Fans who donate will receive a $12 ticket to Sunday’s game or a $5 off voucher for the Team Store. All winter clothes will be donated to Catholic Charities’ St. Margaret’s Homeless Shelter.

The Chiefs’ next home game is Sunday, November 27 versus the Everett Silvertips. It’s the Winter Warmth Clothing Drive — bring new or gently used coats, gloves, hats, etc. to the game or to the Chiefs Ticket Office before the game!  All winter clothes will be donated to Catholic Charities’ St. Margaret’s Homeless Shelter. Tickets for November 26 and all regular season games are available online at spokanechiefs.com/tickets.