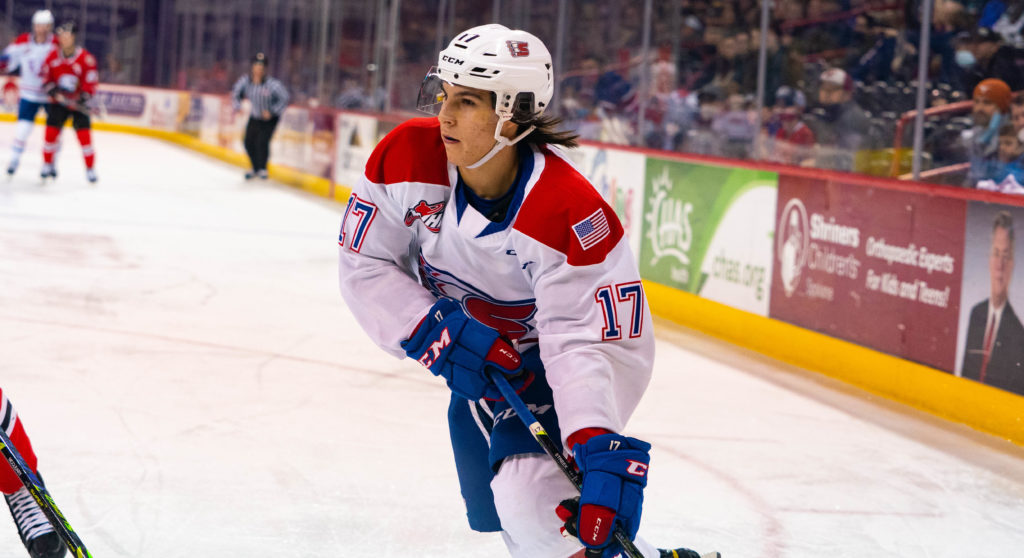 A gritty Spokane Chiefs squad forced overtime against the Portland Winterhawks Thursday night, but ultimately fell 4-3 in their third pre-season game of the year.

The Winterhawks opened the scoring at 17:17 in the first period with a power play goal from center Jack O’Brien. Defenseman Luca Cagnoni and rookie winger Josh Zakreski earned assists on the play.

The Chiefs had four power plays in the first period, but couldn’t capitalize.

Spokane fired back in the second period when forward Carter Streek came through the slot on a breakaway and found the net to tie things up 1-1 at 10:38. Defensemen Saige Weinstein and Logan Cunningham earned assists on the play.

The Chiefs kept their momentum going at 17:37 when forward Kooper Gizowski scored his first goal of the pre-season with help from defenseman Will McIsaac and forward Berkly Catton.

Their lead was short-lived though, as Portland scored in just over a minute left in the second period on a Robbie Fromm-Delorme goal and tied it up 2-2 heading into the final frame.

Catton answered with his first goal of the pre-season at 8:37 in the third to tilt things back in the Chiefs’ favor. 20-year-old Cade Hayes and rookie Cam Parr earned assists on the play.

Another goal by Fromm-Delorme at 9:59 ended up sending the game to overtime, and eventually a shootout.

The Winterhawks made 1-of-3 chances in the shootout, while the Chiefs went 0-for-3, sealing the 4-3 overtime loss.

“It’s crunch time,” Chiefs head coach Ryan Smith said after the game. “The nice thing is we have a couple of games still this weekend where we can evaluate things and insert some guys into the lineup and see if we can get some combinations of things and different d-pairings and try to get some chemistry. For us, it’s speed, skill and compete. The systems we’re putting into place take some time, but we’re looking forward to the end product.”

Rookie goaltender Cooper Michaluk started in net for Spokane and stopped 19-of-20 shots faced before he was relieved by Manny Panghli. Panghli turned aside 24-of-26.

Spokane went 1-for-7 on the power play and 5-for-6 on the penalty kill.

Up next, the Chiefs will travel to Kennewick to play their final two pre-season games against the Winterhawks on Friday and the Tri-City Americans on Sunday.