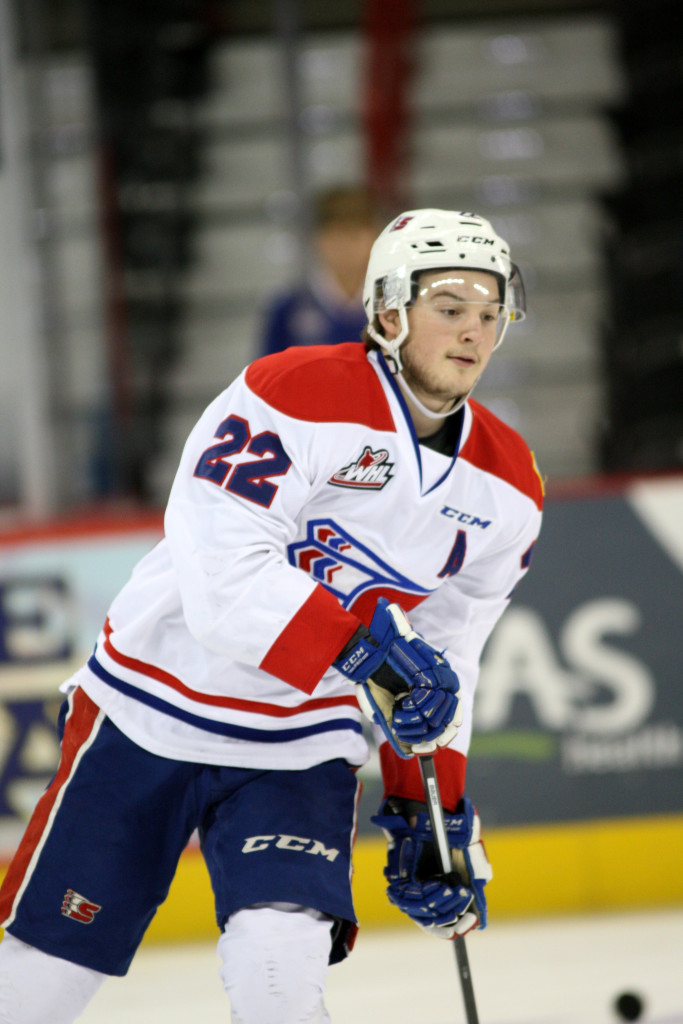 SPOKANE, Wash. – Spokane Chiefs captain Jason Fram earned a three awards in the organization’s annual end of the year award’s ceremony on Saturday night prior to the Coca-Cola Regular Season Finale versus the Kelowna Rockets at the Spokane Arena. The Chiefs lost, 6-1, with Dominic Zwerger scoring the Chiefs’ only goal.

Fram was named the Chiefs’ Player of the Year, Players’ Player and John “Hitman” Hern Defenseman of the Year, an award he won for the second consecutive season. The 20-year-old is in his fifth and final season as a Chief and has appeared in 305 career games. This season, Fram has scored 11 goals, a career high, and 44 points, tops amongst all Chief defensemen and tied for fifth on the team. Fram was originally an eighth round selection in the 2010 WHL Bantam Draft and is 10th in franchise history in career games played. He is the second highest scoring defenseman in franchise history with 185 points (31 goals, 154 assists).

Eighteen-year-old defensemen Evan Fiala and Tyson Helgesen shared the Coaches Award, a first in franchise history. In 58 games, Helgesen has scored 3 goals and 22 points while Fiala has six goals, 18 points and is currently leading the team with 101 penalty minutes and is second with a +18. Fiala was also named the Chiefs’ Humanitarian of the Year.

Sixteen-year-old Jaret Anderson-Dolan earned the Rookie of the Year award as he leads all first-year Chiefs with 14 goals and 26 points and 17-year-old Kailer Yamamoto was named the Ken Rabel Most Sportsmanlike Player of the Year. Yamamoto is leading the team with 65 points.
Seventeen-year-old defenseman Dalton Hamaliuk was named as the Scholastic Player of the Year. In his first season as a Chief, Hamaliuk averaged an 85% in his academic courses, including university-level Advanced Placement Calculus, Advanced Placement Physics, and College Prep English. Hamaliuk has appeared in 64 games and is +7.

In Saturday’s game, Kelowna’s Rourke Chartier, Dillon Dube and Cal Foote each had a goal and two assists to lead the Rockets. The Chiefs finish their regular season on the road with four games, beginning versus Seattle on Tuesday at 7 p.m. Mike Boyle will have the radio call on 1510 KGA NW Sports Talk.