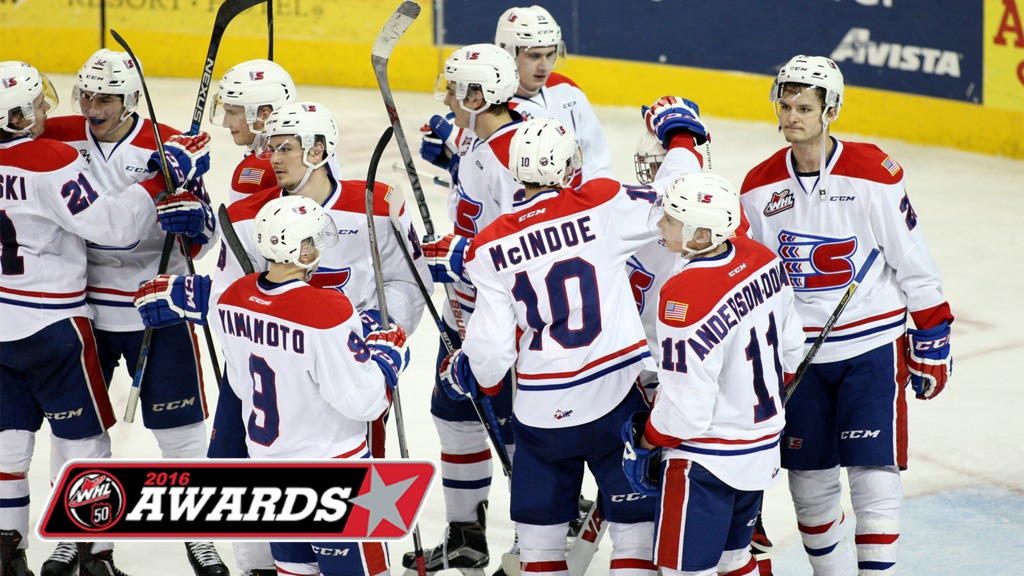 SPOKANE, Wash. / CALGARY, AB – The Spokane Chiefs were recognized today as the Western Hockey League’s 2015-16 Scholastic Team of the Year. The honor was announced as part of the WHL Awards Luncheon in Calgary.

The yearly honor is given to the WHL team that achieves the highest overall academic performance throughout the regular season. This is first time the Chiefs have won the award.

The Chiefs’ Education Advisor, Joe Everson, was on hand in Calgary to accept the award on behalf of the organization.

“We set the academic bar high every season, and the last few years our guys have performed at an exceptional level in the classroom,” Everson said. “We were close last year, so from the first school meeting in August, the players knew that our goal was to win the Scholastic Award. There were no stragglers, and that made my job easy.

“The biggest challenge for every player in the WHL, especially the high-school guys, is achieving at a high level when they’re on the road so much. This year, for example, they were gone almost 25% of the time, and no one is taking any easy courses. To be successful, players need to be exceptionally organized: getting assignments ahead of time, doing them on the road, working hard in study hall and with our team tutor.

“They have to be as committed in the classroom as they are on the ice.”

The Chiefs were one of the youngest teams in the WHL during the 2015-16 season, with nine players attending Ferris High School in Spokane, completing coursework while still representing Spokane on the ice. Leading scorer Kailer Yamamoto attended his hometown Mead High School. They earned an 86% average mark and completed four Advanced Placement courses. Additionally, nine other players completed post-secondary work through Athabasca University’s online program, earning a head start on their college degree.

“WHL players truly are scholar-athletes,” Everson continued. “Winning the Scholastic Award is an endorsement of the organization’s philosophy that character is revealed as much at school as it is at the rink.

“Not every Chief is going to be a professional hockey player, but every one of them can use his WHL scholarship to enroll in a post-secondary program.”

The Chiefs will choose their next class of players in the 2016 WHL Bantam Draft on Thursday morning in Calgary, with the first pick announced around 8 a.m. PDT. Fans can watch the first round of the draft live online at www.whl.ca beginning at 7:30 a.m. PDT. Live results of the entire draft will be available via the WHL Mobile App and online at www.whl.ca/prospects.