Chiefs’ Offense Breaks Through in 6-1 Win Over Victoria 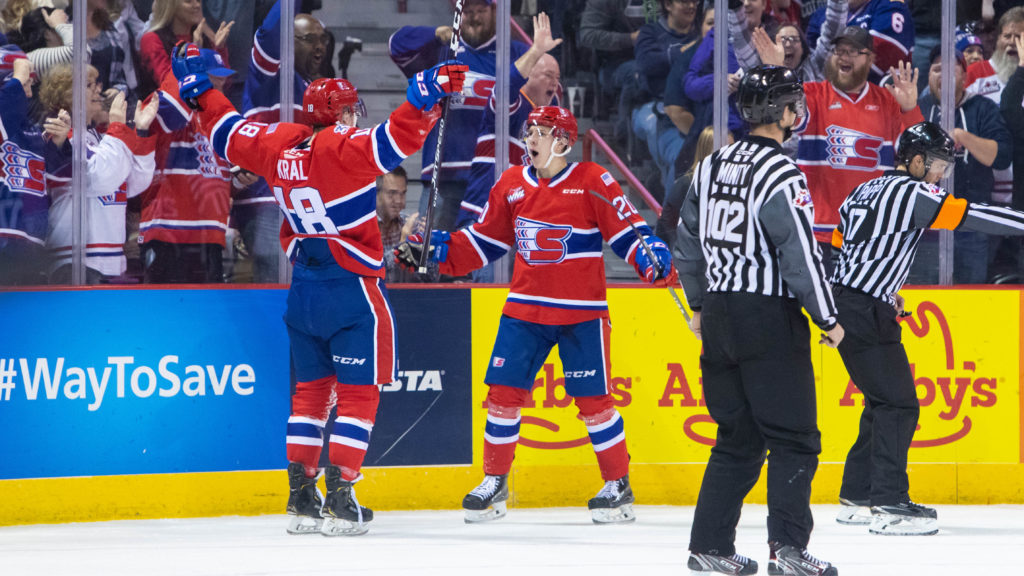 Spokane, Wash. — The Spokane Chiefs scored four goals in 2:50 late in the second and early in the third periods to pull away from the visiting Victoria Royals on Saturday night at Spokane Arena, winning 6-1. Spokane outshot the Royals 36-13, controlling the game throughout.

Czech defenseman and Toronto Maple Leafs prospect Filip Kral got the scoring underway 8:13 into the first period when he found a lane through traffic for his second goal of the season. Kral scored two goals and added five assists in four games against Victoria last season.

The Royals responded at 7:12 of the second when former Chief Sean Gulka tapped in his first of the year off a perfect cross-crease feed from linemate Brandon Cutler.

The Chiefs exploded for three goals in 2:19 late in the middle frame, beginning with rookie Brandon Reller’s second career score at 17:10. Owen MacNeil picked up his first career point with an assist on the play. Last season’s team-leading goal scorer Adam Beckman ripped in his third of the year at 19:03, capitalizing on a nice pass from the end wall from forward Cordel Larson.

First-year winger Reed Jacobson continued the flurry with his first career goal at 19:29, sniping one top-shelf from the left circle to put the Chiefs ahead 4-1 headed into the second intermission.

Larson, who earned first star honors after the game, capped the rapid-fire scoring with a goal just 40 seconds into the third, snapping the puck inside the left post with assists to Beckman and defenseman Noah King. The four goals in 2:50 of game time is just 30 seconds shy of a franchise record — the Chiefs scored four in 2:20 versus Moose Jaw on Dec. 3, 1994.

Defenseman Bobby Russell picked up his second in as many nights to close out the scoresheet, bouncing the puck off a Victoria defender to make it 6-1 with under seven minutes left in regulation.

The win pushed Spokane’s record to 4-3-1-0. They finished the night 1-for-5 on the power play and 3-for-3 on the penalty kill. Campbell Arnold started in goal for the Chiefs, making 12 saves, while Victoria’s Shane Farkas turned aside 30 Spokane shots.