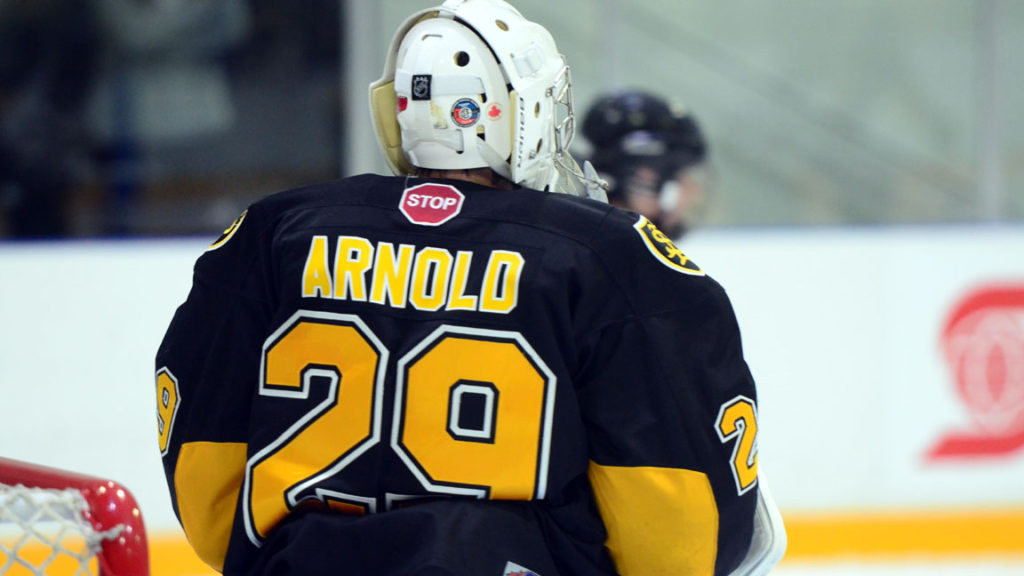 The Chiefs selected goalie Campbell Arnold of Shawnigan Lake School in the second round (28th overall) of the 2017 WHL Bantam Draft. Arnold will participate in his first Chiefs Training Camp this August and be eligible to play for Spokane full time starting with the 2018-19 regular season.

We chatted with Campbell about his draft experience, background and excitement about becoming a Chief for this Q&A.

Q: What was draft day like for you? What was your reaction to being selected by the Chiefs?

CA: I watched the first round from my dorm room at Shawnigan. I had to go English class right as the second round started so I was checking the tracker every two minutes or so. I had to stop looking right before I got picked but then my phone started buzzing away and I knew something happened. Then I got a call from an unknown number that actually turned out to be (Chiefs’ first round pick) Jack Finley so at that point I was just crazy excited. It’s a huge honor and I couldn’t be happier.

Q: How would you describe your style of play? Are there any professional goalies you try to emulate?

CA: I’m a big fan of Cam Talbot (Edmonton Oilers) and try to model my game after him. I think my movements are good and I track the puck well. When I go out there I’m just trying to keep my team in the game no matter what.

Q: What are your biggest strengths?

CA: My focus during games. If I let in a goal, I’m able to forget about it and take the game shot by shot, which I think is important.

Q: What made you want to become a goaltender?

CA: I was a late goaltender actually, about 10 or 11 years old before I started. It was actually not until I saw Marc Andre-Fleury play. As silly as it sounds, at that time it was kind of about the cool gear. (laughs) I guess my parents probably weren’t too happy about that part (expensive goaltender gear). As I’ve gotten older, I’ve really learned to love being the anchor, the backbone of the team and having the chance to really help my team win games. I love that aspect of being a goalie.

Q: You saw a lot of shots come your way last season, facing over 50 six separate times including an 80-save performance in the playoffs. Do you think that influenced your development?

CA: This whole year was unbelievable for me in terms of learning. Sometimes the shots and the scoreboard weren’t what we wanted to see but I think it really helped me develop my mind and my game. The 80-shot game was kind of a gift… I think I let in two in the last ten minutes because my legs were so tired but it really helps your mind to be tested that much. The game is 90% mental so any test like that is good.

Q: A couple of your teammates at Shawnigan Lake School were also drafted, including another goaltender in Will Gurski. How has it been sharing that experience with them? Any trash talk started between the three of you?

CA: (laughs) No, no trash talk yet. It’s been really great sharing everything with them and having that experience. Maybe we’ll start with the trash talk a little later.

Q: Do you have any family history in hockey? Parents or siblings who play?

CA: My dad played Junior A as a winger. My older sister runs a lot and my mom was a marathon runner and still runs.

Q: Did you know anything about the Chiefs or Spokane as a city before being drafted?

CA: I knew a little bit but nothing in depth. Both of my parents had talked to Chris (Moulton) throughout the season and they were able to give me some feedback on the organization from that perspective.

Q: Have you ever been to Spokane? The States?

CA: I haven’t been to Spokane but usually go to Seattle about once a year to watch the Blue Jays play the Mariners (MLB). I’m really excited to get to Spokane and take it in.

CA: Honestly, most of the time it’s just “Arnold”. Sometimes I get “Arnie” but that was my dad’s nickname.

Q: Obviously as a 15-year-old, you won’t have the opportunity to make the team full-time this season. What are your goals for your first training camp (in August)? Anything that you’re most excited about? Nervous about?

CA: I’m excited about everything. I want to work hard and shine the most I can on the ice. I just want to show what I can do and do anything I can to stop the puck.