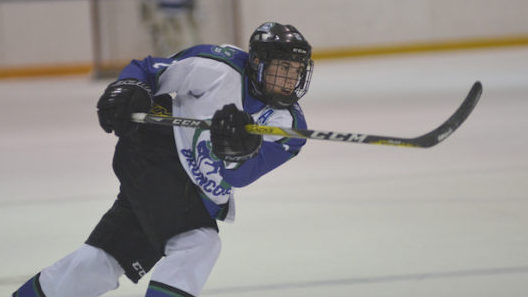 The Chiefs selected defenseman Mac Gross of the Swift Current Kabos Broncos in the third round (50th overall) of the 2017 WHL Bantam Draft. Gross will participate in his first Chiefs Training Camp this August and be eligible to play for Spokane full time starting with the 2018-19 regular season.

We chatted with Mac about his draft experience, background and excitement about becoming a Chief for this Q&A.

Q: What was draft day like for you? What was your reaction to being selected by the Chiefs?

MG: I was at school in second period. I have a watch that vibrates when I get texts. I got some updates as my buddies got picked, then my watch just wouldn’t stop and I saw “Spokane”. It was exciting.

Q: How would you describe your style of play? Are there any professional players you try to emulate?

MG: I try to play like (Columbus Blue Jackets defenseman) Seth Jones because he has a solid two-way game, makes a good first pass and gets his shot through. He’s a big man and skates well while still having the physical component to his game that I think I bring.

Q: What are your biggest strengths on the ice?

MG: Shutting down other team’s best players. Making the first pass and getting our team out of our end and going the other way. I also try to show good leadership qualities and always be a role model on the ice.

Q: Scouts identified you as a well-rounded defenseman, capable of doing just about anything out there. Is that all-around style something that comes naturally to you or is it something you aim for specifically?

MG: I’ve been a shut-down guy naturally, I’d say, but this year I wanted to make myself a more two-way player, available to play in all situations from power play to penalty kill. I think I was able to show some of those abilities while still playing my game.

Q: You were one of three players selected by the Chiefs out of Swift Current. Do you know the other two (Reed Jacobson, Hendrik de Klerk) very well or have you had any interaction with them since the draft?

MG: I talked to them right after the draft to say congratulations and that sort of thing. We’re all friends and know each other. I play baseball with Reed as well, so bus trips with him have been great. We’re all just excited.

Q: Do you have any family history in hockey? Did your parents or siblings play or compete in other sports?

MG: My dad played Junior A in Weyburn (Saskatchewan) and now plays golf professionally. My sister played throughout school and is studying to be a nurse now. We’re good about competing as a family while always making sure it’s fun.

Q: Did you know anything about the Chiefs or Spokane before being drafted?

MG: I had heard a lot about Spokane and the rink, how nice it is and how good the atmosphere is. I haven’t been able to watch them play much since they don’t come through (Swift Current) too often.

MG: I’ve been to Arizona, Las Vegas and Billings. My family goes to B.C. for vacations every once in a while, so the closest I’ve been is actually probably Fairmont, B.C.

Q: What are your goals for your first Chiefs training camp? Anything you’re most excited or nervous about?

MG: I’m just trying to come in with an open mind and listen to what everyone says, especially what the older players say. I want to come in the best shape possible and play my game, not overthink anything and just play the way I can.