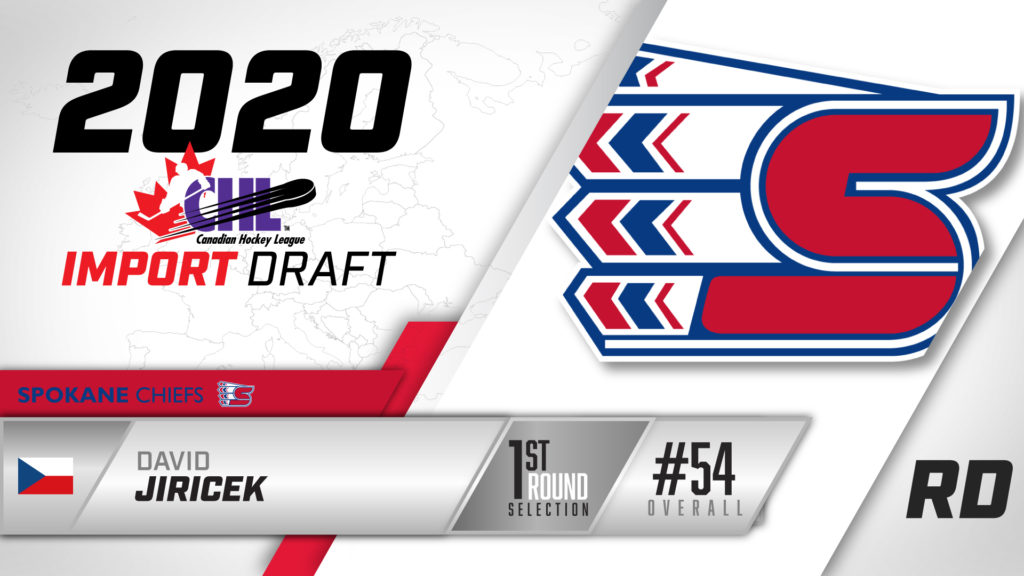 Spokane, Wash. — With the 54th overall pick in the 2020 CHL Import Draft on Tuesday, the Spokane Chiefs selected defenseman David Jiricek of the Czech Republic.

“David was a standout with Plzen’s U20 team and the Czech U18 national team this season,” said Chiefs’ European Scout Janik Beichler. “(He) is a smart, hard-working, two-way defenseman with great size.”

In 16 combined games with Czech national teams last year, the young right-shooting blueliner piled up 12 points (5G-7A). He also made a brief debut with HC Plzen’s professional men’s club, playing four games. With a November 28 birthday, he will first be eligible for the NHL Entry Draft in 2022.

“He excels in the defensive zone, but is a strong offensive contributor as well,” added Beichler. “He should be able to step into the Chiefs’ lineup right away and contribute in all situations.”

Jiricek was one of only two 2003-born players invited to the Czech under-20 national team training camp this summer. Chiefs goalie and Los Angeles Kings prospect Lukas Parik (2001), who represented the Czechs at the 2020 IIHF World Junior Championship, was also invited.

32 players have been invited to the Czech U20 training camp, which begins on June 14.

He hopes to fill the shoes of departing Czech defenseman Filip Kral, who graduated out of the WHL due to age and signed a professional contract with the Toronto Maple Leafs in April. Kral played 154 games for the Chiefs over three seasons, scoring 120 points (31G-89A) and earning multiple team awards, including Rookie of the Year (2017-18) and Defenseman of the Year (2019-20).

🇨🇿 | With the 54th overall pick in the #CHLImportDraft, the Chiefs are proud to select…