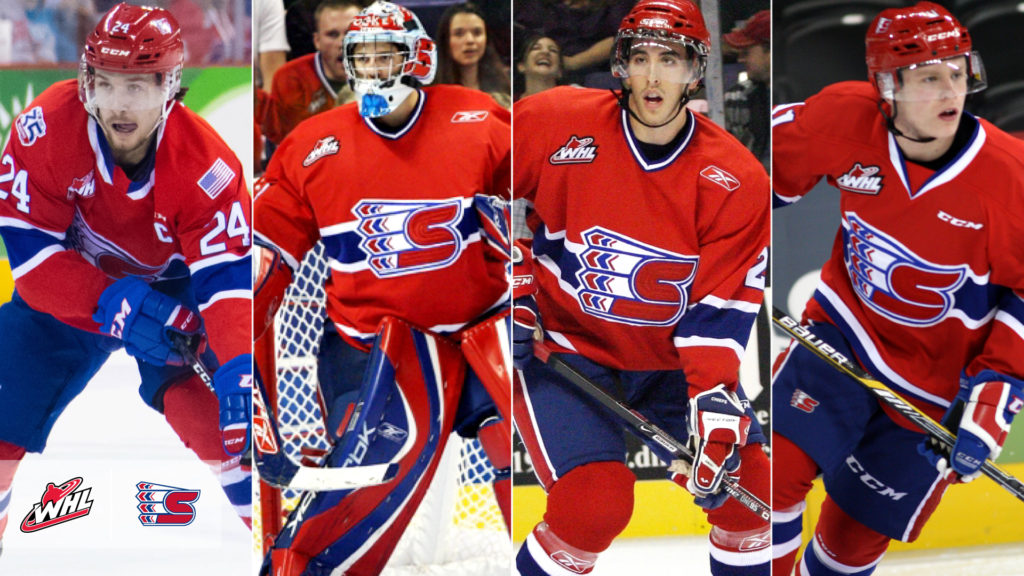 The Western Hockey League will be represented by six players from five WHL member Clubs on Canada’s National Junior Team at the 2020 IIHF World Junior Championship. In the lead up to the start of the tournament on Thursday, December 26 in the Czech Republic, the WHL will be taking a look through the lens of those five teams and some of their past contributions to Canadian entries at the tournament. Today’s profile focuses on the U.S. Division’s Spokane Chiefs.

As one of five returning players to be with Canada at the 2020 IIHF World Junior Championship, Ty Smith’s spot on the team’s defence is well earned.

The Lloydminster, Alta. product has continually grown into the star defencemen role the Chiefs were anticipating when they chose him with the first-overall selection at the 2015 WHL Bantam Draft. He’s proved that and more through 237 WHL regular season and playoff games, posting a combined 209 points (33G-176A) while taking home the Daryl K. (Doc) Seaman Trophy as WHL Scholastic Player of the Year in 2018 as well as the Bill Hunter Memorial Trophy as WHL Defenceman of the Year and the honour of CHL Defenceman of the Year in 2019.

Named the Chiefs captain before the start of the 2018-19 WHL Regular Season, Smith has led Canada on the international stage at the Youth Olympic Games, World Under-17 Hockey Challenge, and IIHF Under-18 World Championship. Regardless of whether he wears a letter or not at this year’s tournament, expect the 19-year-old to play a leading role with the squad.

When it comes to the team from northeast Washington State, the Chiefs are no strangers to sending talent to Canada’s National Junior Team. Most recently, last year’s edition of the tournament proved to be extra special for them with a pair of players representing the red and white. While Smith anchored the blue line, co-captain Jaret Anderson-Dolan was a key member of Canada’s forward group. Together, the pair combined for four points (1G-3A) at the tournament.

1. Having won four consecutive titles at the tournament between 2005 and 2008, Canada turned to a pair of WHL goaltenders from the U.S. Division to guard the crease at the 2009 World Juniors. Watson, Sask. product and Spokane Chiefs goaltender Dustin Tokarski had won a Memorial Cup with the Chiefs at the close of the 2007-08 season and was primed for more success on the big stage.

Through four games at the tournament, Tokarski posted a 2.65 goals-against average and a 0.906 save percentage. That included a 39-save effort against Sweden in the gold-medal game as Canada won 5-1 to complete the epic five-peat. Tokarski also played a part in two of the other memorable games at the tournament, winning the New Year’s Eve game against the United States and standing tall in the semi-finals against Russia.

2. Also emerging from Spokane blue line and leadership was defenceman Jared Cowen, who played at the 2010 and 2011 editions of the tournament, earning silver both times. The Saskatoon, Sask. product contributed strong numbers to the Chiefs’ WHL Championship and Memorial Cup victory in 2008.

The second-overall selection from that previous June’s draft, Falloon easily made his case for earning a spot on Canada’s National Junior Team that year, helping them to a golden performance, contributing six points (3G-3A) over the seven-game round-robin tournament. His absence from the Chiefs didn’t hurt his offensive totals either as Falloon finished with fourteen more points in 10 fewer games, finishing fourth in WHL scoring.

4. For most players, the chance to play in one edition of the IIHF World Junior Championship is noteworthy enough. For WHL Alumni Trevor Kidd, he had the opportunity to appear in three of them, winning gold twice. Though he obviously spent the majority of his WHL career with the Brandon Wheat Kings, Kidd capped off his WHL career with the Chiefs in 1991, winning a WHL Championship as well as a Memorial Cup.

Before that though, he served as the back up in 1990, started all but one game in 1991. Following his time in the WHL, he appeared in all seven games at the 1992 edition of the tournament.

5. Before they took on coaching roles with the Spokane Chiefs, both Dan Lambert and Manny Viveiros had their time on the ice with Canada’s National Junior Team.

While he was a member of the Prince Albert Raiders, Viveiros made his appearance at the 1986 edition of the tournament. Having won a WHL Championship in 1985 with the Raiders, Viveiros went in search of international success. However, the golden performance it wasn’t meant to be for Canada as they finished with a silver medal at the tournament. The year would still end on a high note for Viveiros, who was later recognized as the WHL Player of the Year from the Eastern Conference.

Lambert joined Canada’s National Junior Team in 1989 while he was a member of the Swift Current Broncos. Heading stateside, the Broncos captain recorded three points (1G-2A) in seven games as Canada finished fourth at the tournament. The year of 1989 was still a special one for Lambert, who won a WHL Championship and Memorial Cup with the Broncos that season.