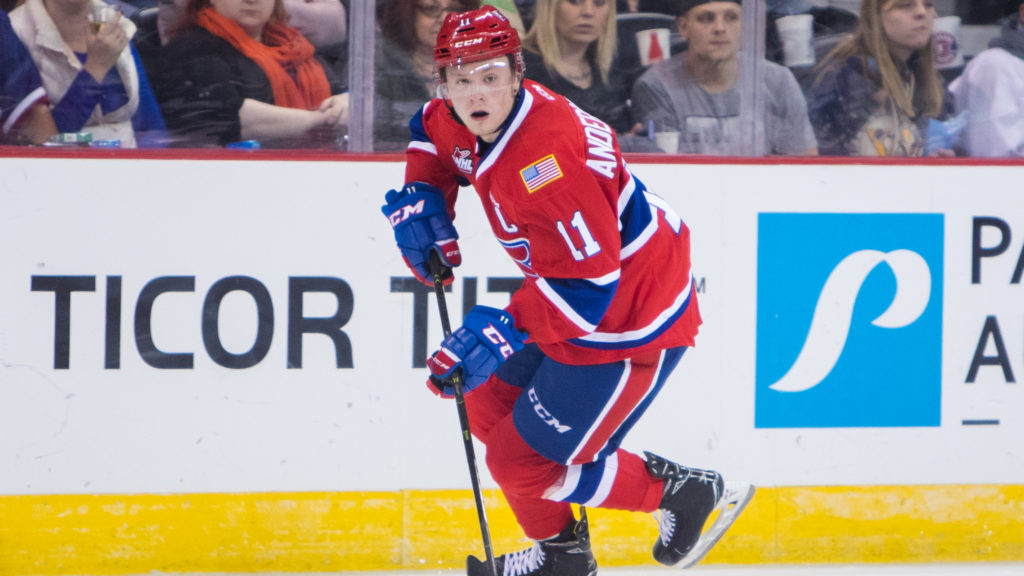 KENNEWICK, Wash. — Jaret Anderson-Dolan’s goal at 3:16 of overtime lifted the Spokane Chiefs to a 5-4 win over the Tri-City Americans on Saturday night in Kennewick. Anderson-Dolan’s goal was his second game-winner on a perfect 4-0 road trip for Spokane and extended his goal-scoring streak to four games.

Stay-at-home defenseman Noah King scored his fifth goal of the season to open the scoring, joining the rush to score from the left wing and make it 1-0 at 3:34 of the first, with the assist coming to Jaret Anderson-Dolan.

Spokane made it 2-0 headed into the first intermission with a power play goal from rookie Adam Beckman, as he snuck in his 27th of the year from the right side.

Tri-City would not go quietly, scoring back-to-back goals to make it 2-2 after 40 minutes of play. Nolan Yaremko scored his 25th of the year at 5:50 of the second period before Krystof Hrabik potted his 17th at 7:07.

Blueliner Nolan Reid regained the Chiefs’ lead after the midway point of the third period, finding the net at 13:23 to make it 3-2, off a feed from Riley Woods, who has 1G & 7A over his last four games.

The Chiefs maintained their momentum, scoring just 10 seconds later as Michael King scored his third of the season – all against Tri-City – to make it 4-2 off assists from McGrew and Reid at 13:33.

Riley Sawchuk scored his 18th of the season on the power play at 18:43, taking advantage of the extra man as the Americans had pulled their goalie to make it 4-3.

Kyle Olson scored to tie it up and force overtime at 4-4 with under two seconds left in regulation, potting his 21st of the season off assists from Sawchuk and Yaremko.

In the overtime, Luc Smith fed the puck up the ice to Anderson-Dolan, who streaked down the right wing and snapped home his fifth goal in his last four games to give the Chiefs their first win at Tri-City in five contests this season. The victory moved Spokane seven points ahead of the Americans for third place in the U.S. Division with seven games remaining. The Chiefs also remained five points back of second-place Portland as Spokane won their season-high fifth consecutive game.

The Chiefs return to Spokane Arena on Tuesday, March 5 to take on the Everett Silvertips for another TicketsWest Player Magnet Giveaway Night. The first 1000 fans through the gates and all full season ticket holders will receive a refrigerator magnet featuring a Chiefs player.