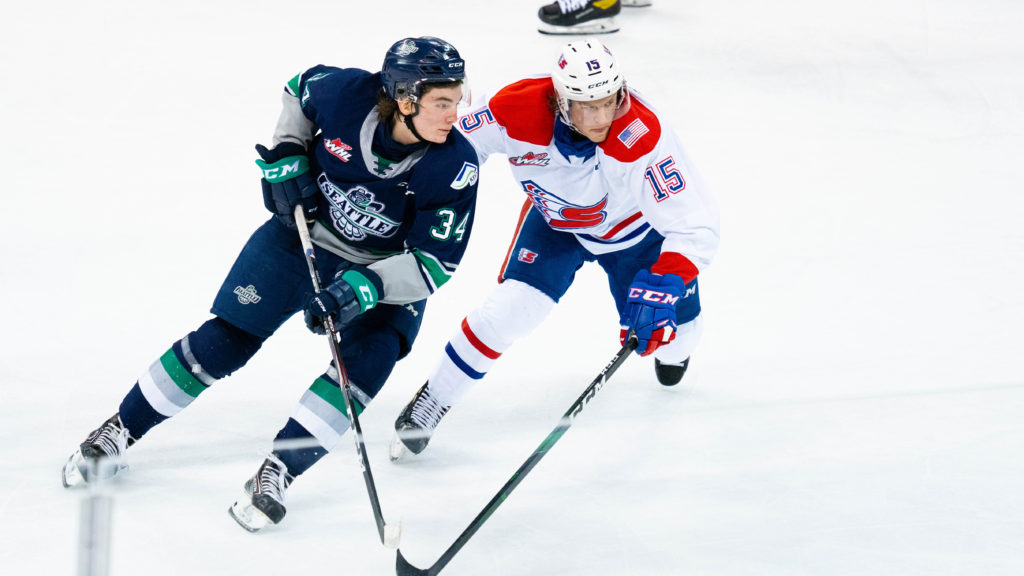 Everett, Wash. – The Spokane Chiefs beat the Seattle Thunderbirds in a shootout Saturday afternoon, skating away with a 4-3 win in the second game of the 2021 WHL Pre-Season.

After a scoreless first period, Seattle forward Sam Oremba found the back of the net early in the second frame to give the T-birds a 1-0 lead. Spokane forward Kooper Gizowski then tied things up with the help of assists from Michael Cicek (F) and Jordan Chudley (D). Cordel Larson (F) snuck in another goal with just 23 seconds left in the period to give Spokane a 2-1 lead heading into the third.

The lead didn’t last long, though, with Seattle forward Mekai Sanders scoring within the first two minutes of the final period. Copeland Fricker answered with his own goal about six minutes in.

Then, a goal from Oremba late in the third period tied things up at 3-3 and pushed the game into overtime. Neither team scored in the extra frame, but all three Chiefs skaters in the shootout put the puck in the net, including Blake Swetlikoff’s game-winner.

Chiefs take a 4-3 shootout victory over Seattle to wrap up day 2 of preseason play. #GoChiefsGo pic.twitter.com/ELmSEMaD8t

The Chiefs outshot the Thunderbirds in each period (32-23 total), and Manny Panghli turned aside 20 of 23 shots faced to bolster Spokane’s offensive efforts.

Next up, the Chiefs will travel to Kennewick to take on the Portland Winterhawks Friday, September 17 at 3 p.m. PT.