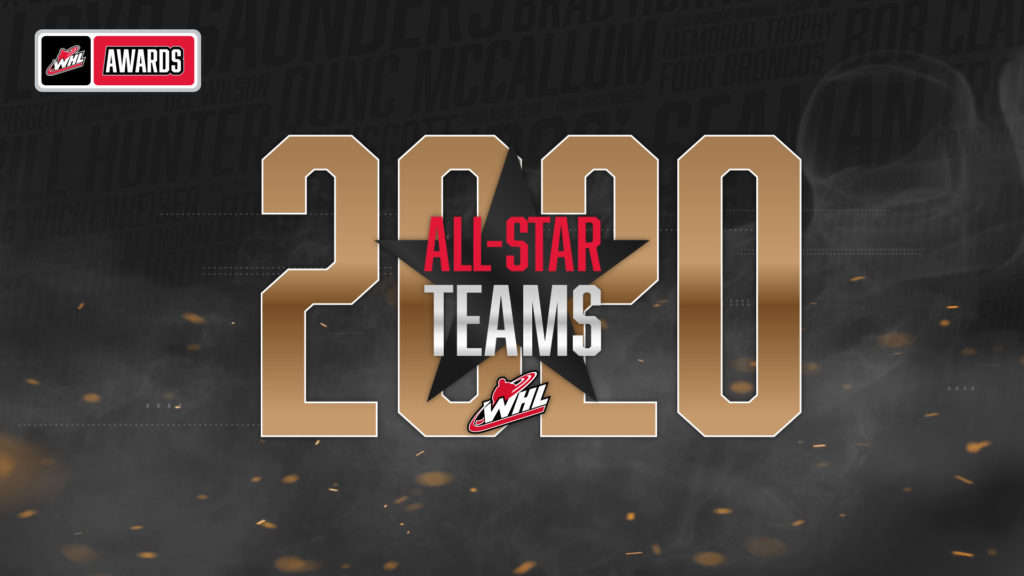 Zummack, in his fourth season as a Chief, ranked second on the team and tied for fifth in the WHL in scoring with 86 points. He was one of four Chiefs to hit the 20-goal milestone (22) and his 64 assists paced the entire league, two ahead of second-place Zane Franklin of Kamloops, who also earned Second All-Star recognition. It marks the most assists by a Chief in one season since Mitch Wahl put up 66 during the 2009-10 campaign, and second-most since Tim Smith’s 70 in 1999-00.

He picked up a career-best five helpers in the Chiefs’ penultimate game, a 6-3 win at Calgary. Two of his six game-winning goals came in overtime.

The Kelowna, B.C. product ranked seventh in the league in plus-minus (+42) and was a model of consistency, posting three point streaks of ten or more games, highlighted by a 17-gamer from Nov. 29 to Jan. 11. He was held off the scoresheet just 12 times all season, including points in 39 of the final 41 games. He finished the abbreviated regular season on a 10-game streak, with two goals and 19 assists. 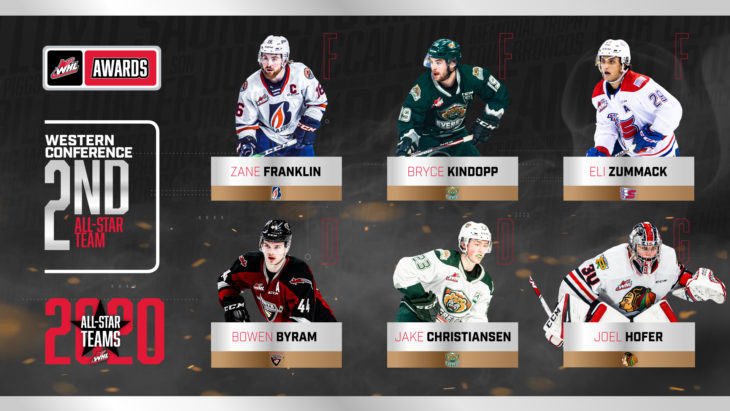 Goaltender Joel Hofer (Portland Winterhawks): The 19-year-old product of Winnipeg, Man. finished tied atop the WHL with a career-high 34 wins. In all, the 6-foot-5, 172-pound prospect of the St. Louis Blues backstopped the Winterhawks with a record of 34-8-3-2, 2.49 goals-against average, .915 save percentage, and four shutouts.

Defenseman Bowen Byram (Vancouver Giants): The 18-year-old product of Cranbrook, B.C. finished with 52 points (14G-38A) in 50 games, good enough to be tied for seventh, while his 14 goals were tied for fifth among all WHL defensemen. Producing 1.04 points per game, Byram’s per-game output was tied for fourth among WHL defensemen. A 6-foot-1, 192-pound prospect of the Colorado Avalanche, Byram has notched 150 points (46G-104A) in 188 career WHL games.

Defenseman Jake Christiansen (Everett Silvertips): The 20-year-old product of West Vancouver, B.C. ripped up the WHL upon his return from the professional ranks, registering 50 points (22G-28A) in only 38 games. His 1.32 points per game and 22 goals rank best among all WHL defensemen, while his 50 points finish ninth among WHL defenders. A 6-foot-1, 190-pound prospect of the Columbus Blue Jackets, Christiansen finishes his WHL career 152 points (50G-102A) in 297 regular season games.

Forward Zane Franklin (Kamloops Blazers): The 21-year-old product of Marwayne, Alta. secured 91 points (29G-62A), representing career highs in all major offensive categories. His 91 points landed him fourth on the WHL scoring charts, while his 62 helpers were second best, and his 32 power-play assists were tops. Over the course of 269 career WHL games, the 5-foot-9, 200-pound Franklin finishes with 213 points (77G-136A).

Forward Bryce Kindopp (Everett Silvertips): The 20-year-old product of Lloydminster, Alta. finished with a career-high 40 goals, good enough for fourth among WHL goal scorers in 2019-20. The 6-foot-2, 190-pound prospect of the Anaheim Ducks registered 11 game-winning goals, the only WHL player to hit double digits in game-winners this season. In total, Kindopp finished with 74 points to his credit, representing a career high. Over 266 career WHL games, he collected 197 points (110G-87A). 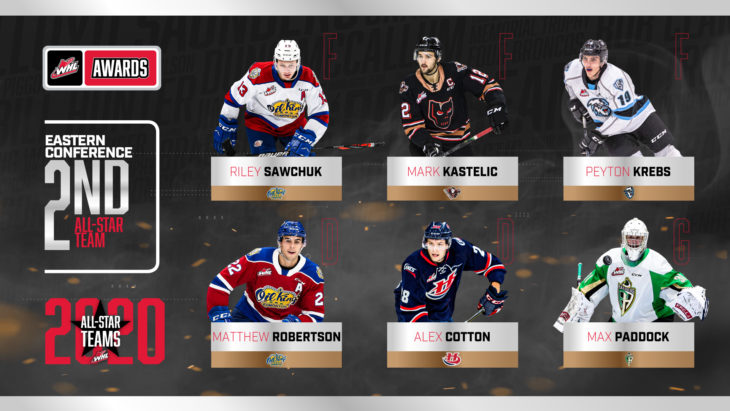 Goaltender Max Paddock (Prince Albert Raiders): With five shutouts to his name, the 19-year-old product of Brandon, Man., finished tied for second in that category, while his 23 wins rank fifth in the WHL. The 6-foot-2, 167-pound Paddock finished his third full WHL season with a record of 23-16-4-4, including a 3.31 goals-against average and .905 save percentage.

Defenseman Alex Cotton (Lethbridge Hurricanes): With 67 points (20G-47A) in 63 games, the 18-year-old product of Langley, B.C. led all WHL defensemen in scoring. His 47 assists ranked second among WHL defensemen. A fifth-round pick (99th) of the Hurricanes in the 2016 WHL Bantam Draft, the 6-foot-2, 180-pound Cotton established career highs in all major offensive categories during 2019-20 and is eligible for the 2020 NHL Draft.

Forward Mark Kastelic (Calgary Hitmen): The 21-year-old product of Phoenix, Ariz. finished the campaign tied for fifth in WHL goal scoring, with 38 markers to his credit in 58 games. Overall, Kastelic collected 68 points, including a career-high 30 assists, as well as a career-high rating of plus-30. A 6-foot-4, 221-pound prospect of the Ottawa Senators, Kastelic finishes his WHL career with 235 points (126G-109A) in 321 regular season games.

Forward Peyton Krebs (Winnipeg ICE): Upon returning from an off-season training injury, the 19-year-old product of Okotoks, Alta. produced at one of the highest rates in the WHL. With 60 points (12G-48A) in only 38 games, Krebs produced 1.58 points per game, good enough for fourth best in the WHL. A 5-foot-11, 180-pound prospect of the Vegas Golden Knights, Krebs has collected 188 points (49G-139A) in 175 career WHL games.

Forward Riley Sawchuk (Edmonton Oil Kings): The 21-year-old product of Prince Albert, Sask. thrived in his only season with the Oil Kings, leading his Club in scoring with 76 points (25G-51A) in 64 games, setting career highs in all major offensive categories. His 51 assists finished tied for seventh in the WHL during 2019-20. Over the course of 259 career WHL games, the 5-foot-11, 175-pound Sawchuk finished with 160 points (62G-98A).