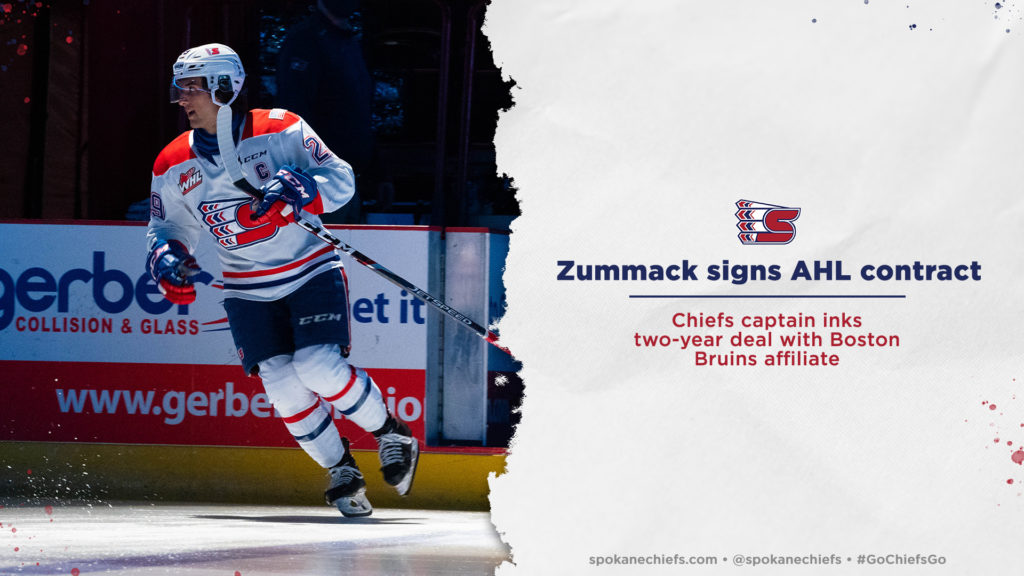 Providence, R.I. – Former Spokane Chiefs forward and team captain Eli Zummack has signed a two-year AHL contract with the Providence Bruins, as announced by the Bruins on Thursday. Providence is the AHL affiliate of the NHL’s Boston Bruins.

“Eli improved each year as a playmaking center with the Spokane Chiefs of the Western Hockey League,” said Bruins GM John Ferguson in a team announcement. “We are excited to have him in Providence and look forward to watching his growth and development this season.”

Zummack, who was named the Chiefs’ 33rd captain in team history prior to the 2020-21 season, led the team in assists (13) and was second in both points (22) and goals scored (9). The overage center contributed multi-point efforts in eight of his 21 games played, including four-point games at Everett on April 13 and against Tri-City on April 28.

Acquired by the Chiefs in 2016, the former second-round bantam draft selection finishes his WHL career on several Chiefs’ career leaderboards, including sixth in assists (169), 17th in points (239), and 33rd in games played (254). He was twice named a WHL Western Conference Second-Team All-Star.