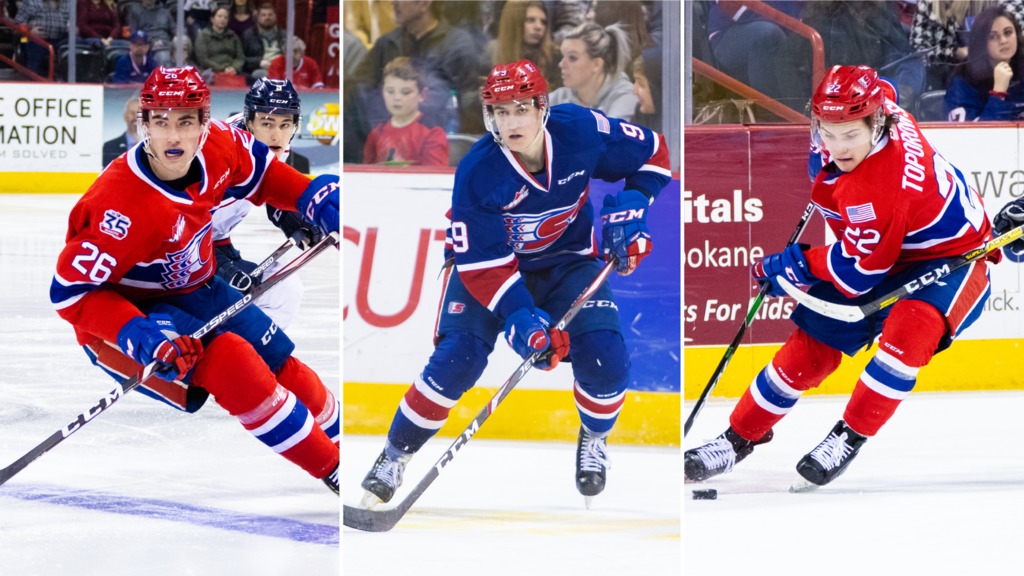 The annual list provides insight and projects ahead to the NHL Entry Draft, held each summer. This year’s event date is to be determined due to the COVID-19 pandemic; the final NHL CSS meetings were held via video conference for the first time in the service’s history.

Finley, a former first-round bantam pick by the Chiefs, surely has the attention of scouts after breaking out with 57 points (19G-38A) in 61 games this season, centering a line with WHL top scorer Adam Beckman. A key force for Spokane on faceoffs, Finley won 53.4% of his draws despite turning 17 on just September 2. He is just 13 days shy of the NHL cut-off (Sept. 15) that would have put him first eligible to be drafted in 2021. The 6-foot-5 power forward has hockey bloodlines; father Jeff played over 700 NHL games as a defenseman primarily with St. Louis and now works as an amateur scout for Winnipeg.

Hughes burst onto the scene seemingly out of nowhere, scoring 16 goals and adding 31 assists for 47 points in 61 games. He finished the season ranked 7th among all WHL rookies in points, 9th in goals, tied for 4th in assists and 5th in shots on goal. His most noteworthy stretch was the month of November, when he piled up 12 points (5G-7A) and a plus-12 rating in 12 games to earn recognition from the league as the WHL Rookie of the Month.

Raised in Post Falls, Idaho, Hughes played for the Spokane Braves of the KIJHL last season, his first eligible for the NHL draft. The 2001-born forward earned the Chiefs’ Rookie of the Year award.

Toporowski wraps up the Chiefs’ representatives on the list at 191st after being unrated in the mid-season report. The speedy winger improved his game throughout the year and finished on a scoring tear. After the mid-season holiday break, Toporowski scored 40 points (22G-18A) in the team’s final 31 games, including a career-best 10-game point streak. Joining Hughes as a 2001-born skater in their second eligible year, Toporowski attended Winnipeg’s rookie camp last summer after being narrowly passed over in the 2019 draft.