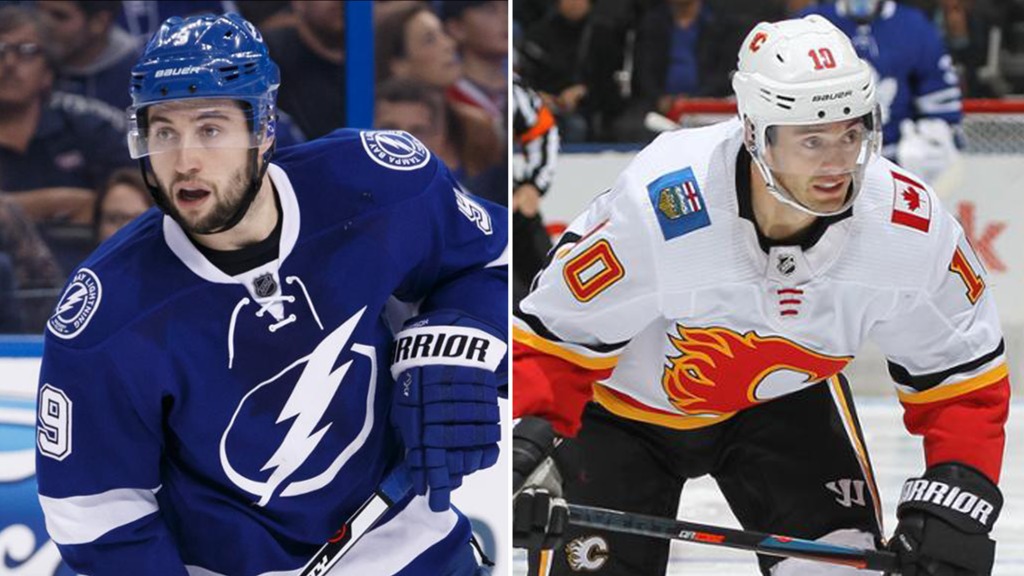 When the 2019 NHL Playoffs open on Wednesday, the Spokane Chiefs will be well-represented, including a pair of Spokane natives and former Chiefs greats who are positioned as their respective conference’s top seeds.

Tyler Johnson, who played 266 games with the Chiefs from 2007-11, and the Tampa Bay Lightning hold the #1 seed in the Eastern Conference. Out west, Derek Ryan and the Calgary Flames stake claim to the #1 spot in the Western Conference.

Johnson, 28, has carved out an illustrious career at the game’s highest level, totaling 308 points, 139 goals and 169 assists through 469 games for the Lightning since joining the team during the 2012-13 NHL season. His 29 goals for Tampa Bay this season ties a career best.

The Central Valley High School graduate, who was originally an 11th-round selection by the Chiefs in the 2005 WHL Bantam Draft, was not selected in the NHL Draft but signed a three-year entry-level contract with Tampa Bay in 2011. During his junior career in Spokane, he piled up 282 points (128 goals) and was a member of the Chiefs’ 2008 Memorial Cup Championship team.

A contributor to the NHL’s top-scoring offense and record-tying 62-win campaign, Johnson and the Lightning will look to take down the Columbus Blue Jackets in their best-of-seven opening round match-up beginning Wednesday at 4 p.m. PT.

The 32-year-old Ryan readies for his first playoff run as a member of the Flames after spending the last three seasons with the Carolina Hurricanes, for whom he debuted during the 2015-16 NHL season. His path to professional success has been a winding one, featuring stops at the now-defunct United Hockey League and a four-year stint at the University of Alberta of the Canadian college ranks in addition to playing overseas in Austria and Sweden. Nearly 10 years after concluding his WHL career with the Chiefs, during which he scored 67 goals and 167 points in 216 games, he finally inked his first NHL contract in June of 2015.

A graduate of Spokane’s Shadle Park High School, Ryan has been a steady contributor to Calgary’s efforts in his first season with the club, totaling 38 points on 13 goals and 25 assists in 81 games played under former Chiefs head coach Bill Peters.

Peters ranks fourth all-time Chiefs history in both career wins at 111 and playoff wins with 18, highlighted by the organization’s second Memorial Cup Championship in 2008.

His first NHL head coaching job came with the Carolina Hurricanes, where he coached from 2014-18. His gig in Carolina reunited him with Derek Ryan, whom Peters coached in Spokane from 2005-07. Upon securing the head coaching job for the Flames in April of 2018, Ryan made the move with his former coach.

Peters’ hiring has been an impactful one for Calgary as he’s improved the team by 13 wins in his first season, taking them from a fifth-place finish in 2017-18 to the Pacific Division Championship this year.

Also set to appear in the 2019 NHL Playoffs is Toronto Maple Leafs Head Coach Mike Babcock, who served as the Chiefs’ head coach from 1994-2000. Over the span, Babcock guided Spokane to 223 regular season wins -second in team history – and 40 playoff victories, good for most all-time by a Chiefs head coach.

This will be the third consecutive playoff appearance for Toronto under Babcock, who took over as the team’s bench boss prior to the 2015-16 season.

Colorado Avalanche Head Coach Jared Bednar, who appeared in 78 games as a player for Spokane from 1991-93, will look to upset Peters and the Flames in their first-round match-up as they open play on Thursday at 7 p.m. PT. This is the Avalanche’s second playoff appearance under Bednar, who took the helm in Colorado prior to the 2016-17 season.

The Chiefs’ second-round playoff series versus the Everett Silvertips continues this week at Spokane Arena with Game 3 on Wednesday night and Game 4 on Friday night. Game 5, if necessary, will also be in Spokane on Saturday, April 13. All games will begin at 7:05 p.m.

Tickets for Game 3 and Game 4 are available online, over the phone at 509-535-PUCK or in-person at the Chiefs’ Ticket Office at Spokane Arena.