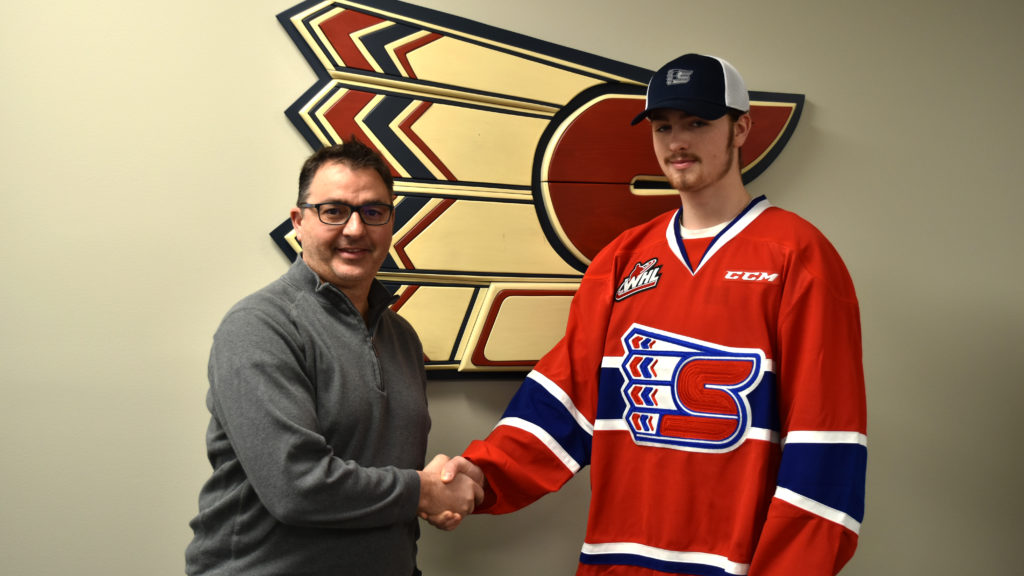 SPOKANE, Wash. – The Spokane Chiefs announced on March 13 that forward Sean Gulka has signed a WHL Player Agreement and will join the Chiefs as an affiliated player for the remainder of the season.

“We’re excited to officially welcome Sean to our organization,” said Chiefs’ General Manager Scott Carter. “He skates well for a big man, brings energy and will be a valuable addition to our team.”

Gulka, 18, is a 6-foot-3, 185-pound forward from Langley, B.C. He played 50 regular season games with the Langley Rivermen of the BCHL this year, scoring 12 goals and adding 13 assists for 25 points. He added two goals in six playoff games as the Rivermen lost in the first round to the Surrey Eagles.

The Chiefs acquired Gulka’s rights in a trade with Victoria in November 2017. He was originally a ninth round selection by the Royals in the 2015 WHL Bantam Draft.

Gulka is expected to join the Chiefs this week and will wear jersey number 25.

In another roster move made on Tuesday, goaltender Bailey Brkin has been recalled and will rejoin the Chiefs.

Brkin, an 18-year-old netminder from Sherwood Park, Alta., played four games with the Chiefs in January, posting a 2.51 GAA and .921 SV% including one shutout. His rights were acquired by the Chiefs in a January trade with Kootenay.

Brkin finished the 2017-18 season with the Lloydminster Bobcats of the AJHL, appearing in 11 regular season games with a 2.68 GAA and .929 SV%. The Bobcats lost 3-0 in the first round of the AJHL playoffs to the Whitecourt Wolverines, allowing Brkin to rejoin Spokane as an affiliated player.