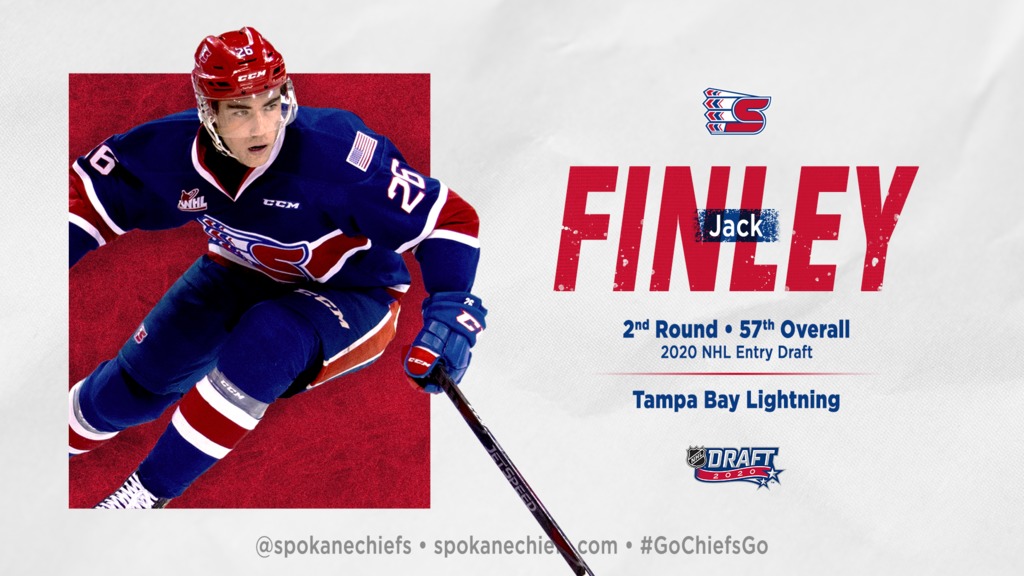 Spokane Chiefs forward Jack Finley was selected by the Tampa Bay Lightning in the second round (57th overall) of the 2020 NHL Entry Draft on Wednesday.

“It was an awesome experience to be a home with my family (for the draft),” said Finley. “Being a second round pick is an honor. It has been a long wait and to be with a team like Tampa Bay, it is all worth it.”

“At the end of the day, it doesn’t matter what number I get picked, I understand the hard work I have to put in now to make the roster.”

A tall, imposing forward standing at 6-foot-5 and 205 pounds, Finley had the attention of scouts after breaking out with 57 points (19G-38A) in 61 games during the 2019-20 season, centering a line with WHL Player of the Year Adam Beckman. NHL Central Scouting had him ranked at 38th among North American skaters headed into the draft.

“This is a well-deserved milestone in his career and reflects the work he has put into his development here in Spokane.”

A Kelowna, B.C. native, Finley posted 14 multi-point games, including four with 3+ and a career-best four points (1G-3A) in a dramatic 7-6 overtime win at Portland in early February. He finished the shortened season with points in 12 of the team’s 17 games (9G-12A).

With the 57th overall pick, we’ve selected Jack Finley from the @spokanechiefs of @thewhl. ⚡️ pic.twitter.com/bRxqkEq1TF

A key force for Spokane on faceoffs, he won 53.4% of his draws despite turning 17 on just September 2. He is just 13 days shy of the NHL cut-off (Sept. 15) that would have put him first eligible to be drafted in 2021. The former first-round bantam pick has hockey bloodlines; father Jeff played over 700 NHL games as a defenseman primarily with St. Louis and now works as an amateur scout for Winnipeg.

Finley’s selection marks the 75th time a Spokane Chief has been picked in the NHL Draft, including at least one player in each of the last six years. He is the third Chief taken by the Lightning, including notable former stars Dustin Tokarski (2008; 5th round) and Joe Cardarelli (1995; 9th round). Tyler Johnson signed with Tampa Bay as a free agent.