Kailer Yamamoto named WHL On the Run Player of the Week 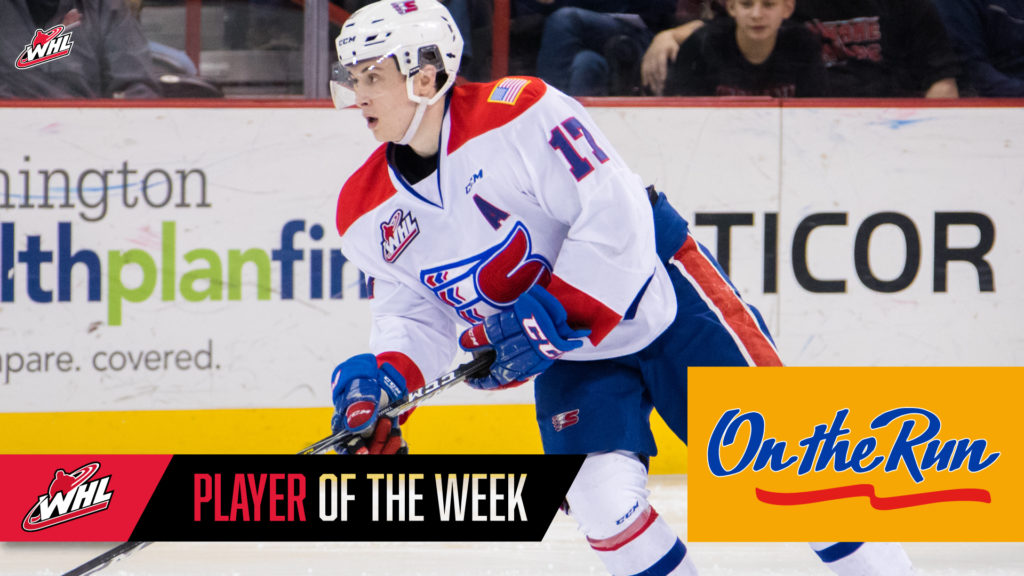 SPOKANE, Wash / CALGARY, Alta. – The Western Hockey League announced today that Spokane Chiefs forward Kailer Yamamoto has been named WHL On the Run Player of the Week for the week ending January 28, 2018.

Yamamoto, who was selected by the Edmonton Oilers in the first round, 22nd overall, of the 2017 NHL Draft, registered 10 points (6G-4A) in four games as the Chiefs continued to occupy the second wild card spot in the Western Conference while also remaining on the cusp of moving into the top three teams in the competitive U.S. Division.

Tuesday, Yamamoto had a goal and three points as the Chiefs beat the Swift Current Broncos by a 4-2 score. He scored Spokane’s first goal and picked up two even-strength assists while being named the second star of the game. One night later, Yamamoto helped guide the Chiefs to victory as he scored twice in a 5-0 shutout of the Vancouver Giants. One of Yamamoto’s goals came at even-strength and the other came while short-handed, earning him first star honours in the game.

Saturday, Yamamoto picked up a primary assist in Spokane’s 5-4 overtime loss to the Tri-City Americans. The Oilers prospect had a big performance in his final game of the week, tallying a goal and four points in 6-5 overtime loss to the Everett Silvertips Sunday. His effort earned his third star honours in-house as well as first star of the night honours in the WHL.

The 5-foot-8, 155-pound 19-year-old forward from Spokane, Wash. began his year with the Oilers, tallying three assists in nine games. Since returning to Spokane, he has 31 points (9G-22A) in 21 games, producing near the same rate as last year’s 99-point campaign.

Originally selected by the Chiefs in the fifth round, 105th overall, of the 2013 WHL Bantam Draft, Yamamoto has been a valuable part of the Chiefs lineup throughout his WHL career, tallying 258 points (93G-165A) in 211 games. Of his 93 goals, 28 have come on the power play, five were while short handed and he has 20 game-winning goals to his credit as well. He’s also appeared in 12 WHL playoff games, recording 10 points (3G-7A).

The Chiefs will continue their pursuit of better positioning in the U.S. Division Friday, February 2 (7:00 p.m. MST) when they travel to Cranbrook, B.C. to take on the Kootenay ICE.