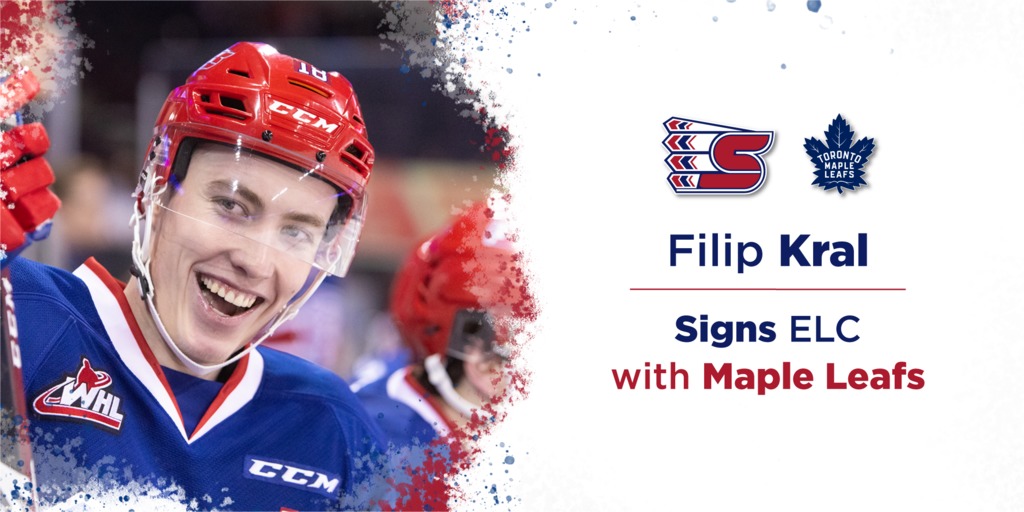 Spokane Chiefs defenseman Filip Kral has signed a three-year entry-level contract with the Toronto Maple Leafs, as announced by the Maple Leafs on Wednesday afternoon. Kral was originally selected by the Leafs in the fifth round (149th overall) of the 2018 NHL Entry Draft.

Recognized earlier this week as winner of the Chiefs’ Defenseman of the Year (co-winner with Ty Smith) and Most Sportsmanlike Player awards, Kral posted a career-best 49 points including 12 goals and 37 assists in just 53 games played, all while also recording a +18 rating.

The Blansko, Czech Republic native ranked 10th among all WHL blueliners in points and tied for 11th in goals. He tallied three points in a game three times and multiple points in 16. Donning an “A” as an alternate captain, he scored points in 16 of the team’s first 22 games, including point streaks of six, three and four games.

Kral also finished strong, notching 11 points (2G-9A) in his final 11 games including three assists in a key February 9 win over division rival Everett and two helpers in a statement victory over the Eastern Conference champion Edmonton Oil Kings on the road.

Despite playing top minutes, the smooth-skating rearguard was able to avoid the penalty box, taking just four minor penalties all season and none after Dec. 27. He was one of just five WHL defensemen this season to play 50+ games while picking up fewer than 10 penalty minutes.

Kral was originally the Chiefs’ second-round pick in the 2017 CHL Import Draft (78th overall). He wraps up his junior career with 154 games played, scoring 31 goals and 89 assists for 120 points. He represented the Czech Republic at the 2018 and 2019 IIHF World Junior Championships.