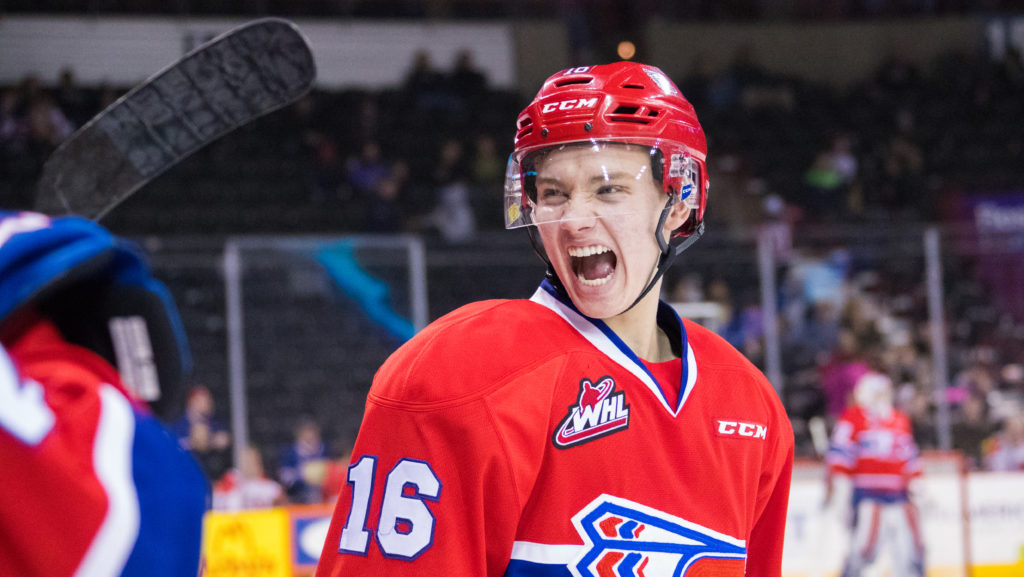 Spokane, Wash. — The Spokane Chiefs’ 2019 Training Camp came to a hard-fought close on Sunday afternoon at Spokane Arena as Team Red came away with a 4-1 win over Team White in the annual Red-White Game. Returning forward Cordel Larson led the way with two goals for Red.

This year’s camp-ending intrasquad scrimmage was a rare defensive affair as it took over 15 minutes to break onto the scoreboard. It turned out to be a pair of 2003-born forwards who partnered up to give Red a 1-0 lead at 16:42 of the first as Ty Cheveldayoff cleaned up a loose puck created by Manitoba-native Grady Lane.

Red struck again in the second, this time as the veterans stepped up to find the net. Eli Zummack made a nice move in his own zone to get free before carrying the puck through the neutral zone. A quick outside-in move created a chance that resulted in a bouncing puck. Larson snuck in and picked up the scraps, backhanding the puck top shelf to give his team a two-goal lead into the second intermission.

White bounced back early in the third as second-year forward Erik Atchison snapped a goal inside the left post to make it 2-1. The unassisted goal came just minutes after Atchison rang the iron with a shot off the post and crossbar, drawing gasps from the Spokane Arena crowd.

Red would not break any further, effectively sealing the win at with 2:49 left in regulation as Larson ripped his second of the afternoon from just inside the right circle, with assists to Zummack and Minnesota Wild prospect Adam Beckman. Prospect Matthew Langdon, picked by the Chiefs in the eighth round of the 2019 WHL Bantam Draft, earned the empty-netter late with a strong hustle play.

Goaltending duties were split evenly among four netminders. Tyler Palmer started for White and made nine saves on 11 shots faced in 30:30. Mason Beaupit replaced Palmer midway through the second period and turned aside 13-of-14 shots faced in 28:10. Campbell Arnold started for Red was perfect on 15 shots faced. Texas native Paxton Geisel jumped in at the same midway point of the second and stopped 18 of 19 shots faced in 29:30.