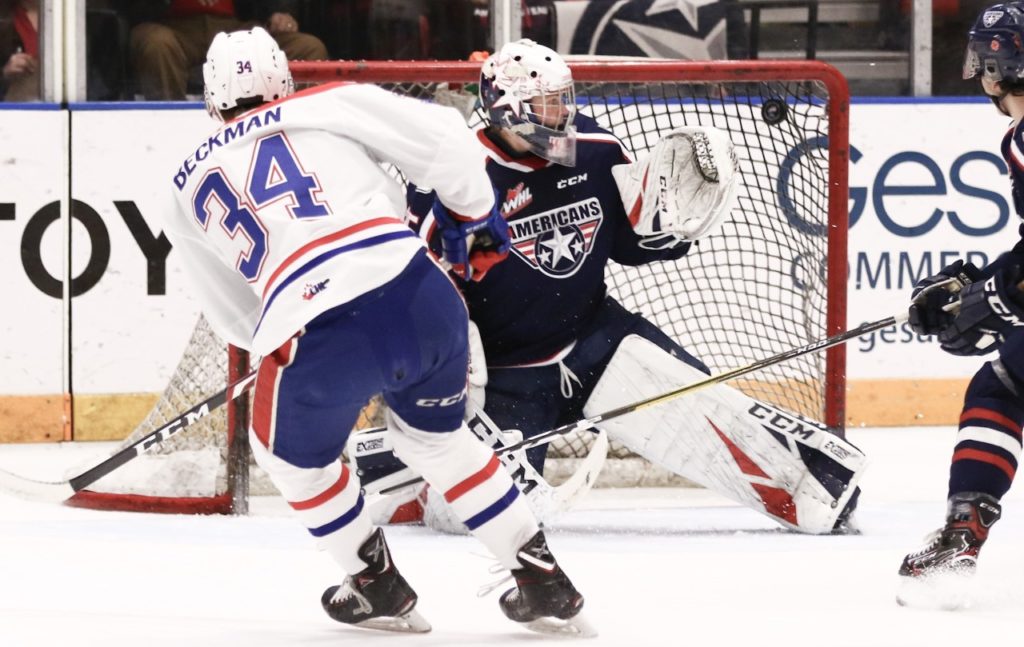 Kennewick, Wash. — Minnesota Wild prospect Adam Beckman scored his second goal of the night with just 50 seconds remaining in regulation to propel the Spokane Chiefs to their third-straight win and second of the weekend, 4-3 over the Tri-City Americans on Saturday in Kennewick.

The Chiefs struck first as Beckman – back in the lineup for the first time since participating in the 2019 CIBC Canada-Russia Series for Team WHL – snapped one past the glove of Tri-City goaltender Beck Warm at 17:49 of the opening period. Linemate Cordel Larson used his speed on the right wing to track down a loose puck before centering to the streaking Beckman.

Spokane made it 2-0 midway through the second as it was Larson who found the net this time, firing a shot from the high slot inside the left post for his third of the season.

Tri-City cut the lead to one at 16:19 with a goal from Kristof Hrabik. The Czech forward deflected a Bryan McAndrews shot to make it 2-1.

The Chiefs responded quickly as 2020 NHL draft prospect Bear Hughes potted his eighth of the year on a deflection of a Bobby Russell point shot just 38 second later. Hughes ranks 3rd among all WHL rookies in goals scored.

The Americans cut the lead to one once again with just under seven seconds remaining in the middle frame, converting on a power play as Nick Bowman punched in a second-chance opportunity. Tri-City tied it up with 7:56 left in regulation as Blake Stevenson corralled a misguided puck between the circles and slid it under Spokane goalie Lukas Parik for his first of the season.

Beckman struck again at 19:10 of the third as Filip Kral found him netfront from the right circle. Eli Zummack kept the puck on a string to maintain possession during the flurry, with an attempted centering feed filtering through to Kral on the left side. The Maple Leafs prospect circled behind the net before finding Beckman flashing in front for the game-winner.

Parik was solid in goal once again for Spokane, making 29 saves on 32 shots faced. Warm finished with 35 stops for the Americans.

The Chiefs are now 10-0 when scoring four or more goals this season.

Notes: Spokane captain Ty Smith remained out of the lineup on Saturday night. He has missed both Chiefs games since returning from the Canada-Russia Series, where he served as captain for Team WHL.

The Chiefs continue their road trip at Everett on Sunday afternoon. The puck will drop at 4 p.m. with Mike Boyle on the radio call on 103.5 FM The Game, beginning with the pre-game show at 3:30.