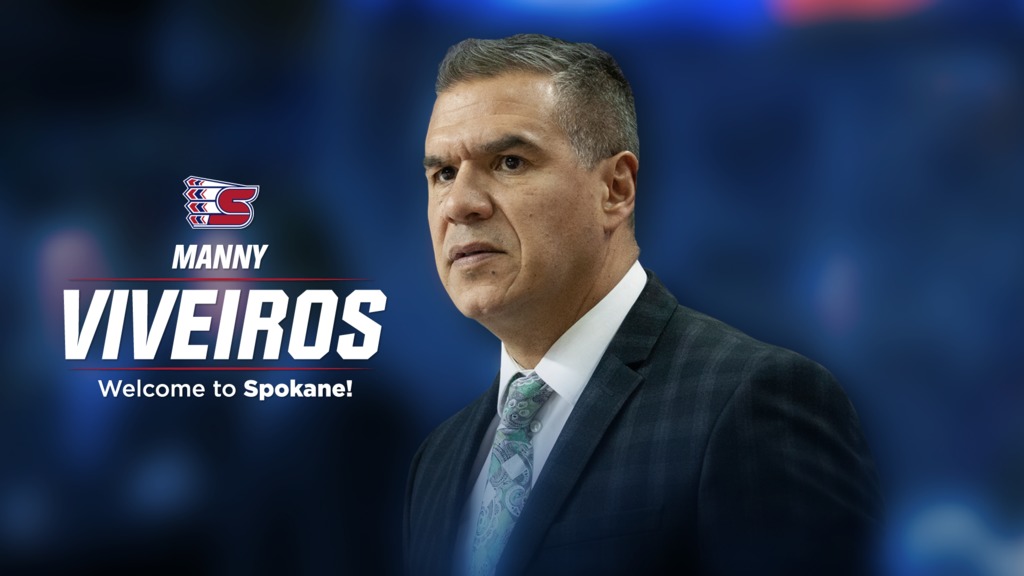 Spokane, Wash. — The Spokane Chiefs announced on Tuesday that they have hired Manny Viveiros to be the 13th full-time head coach in the organization’s history. Viveiros was previously an assistant coach with the Edmonton Oilers (NHL) as well as head coach and director of player personnel of the WHL’s Swift Current Broncos, winning a WHL Championship in 2018. He will be officially introduced at a public press conference at Spokane Arena on Wednesday afternoon.

“I would like to thank Bobby and Cathy Brett as well as Scott Carter for this opportunity,” said Viveiros. “Spokane has always been one of the premier franchises in the WHL and the whole CHL. It’s an honor to join the Chiefs family. My wife Laurie and I are looking forward to living and being involved with the city.

“The WHL is very special to me and my family. I am thrilled to work with the Chiefs’ organization to continue to develop great young hockey players and, more importantly, help these young men mature to achieve their goals on and off the ice.”

Viveiros, 53, boasts 12 years of coaching experience in North America and overseas. Most recently, he was an assistant for the Oilers during the 2018-19 season.

“Manny’s coaching résumé is top-end as he has been a champion as a coach and as a player,” noted general manager Scott Carter. “What really excites me is the type of person both he and Laurie are, and the character he will display around our Chiefs every day.”

Prior to his time in Edmonton, he served as head coach and director of player personnel in Swift Current for two seasons (2016-18), leading the Eastern Conference squad to a combined 87-40-9-8 regular season record. The Broncos won 48 games for 103 points during the 2017-18 campaign before their thrilling championship run, defeating the Everett Silvertips in the finals to secure the Ed Chynoweth Cup. He was named the WHL’s 2017-18 Coach of the Year.

The recipient of the Dunc McCallum Memorial Trophy as the 2017-18 WHL Coach of the Year, Viveiros also played four seasons with the Prince Albert Raiders, playing a part in the team’s 1985 #MCMemorialCup win. #Oilers pic.twitter.com/90J4pu0Lhi

Viveiros began his career behind the bench with Klagenfurter AC of the Austrian Erste Bank Eishockey Liga (EBEL) in 2007, remaining with the club as head coach (2007-12) then sports manager (2012-14) until 2014. Under his leadership, Klagenfurter won the EBEL championship in 2009 and 2013.

“We are thrilled to have Manny join the Chiefs family,” added Chiefs’ managing partner Bobby Brett. “His hockey knowledge is outstanding and it is very apparent that he will be an excellent fit with our organization. We look forward to him joining in the tradition of great coaches here in Spokane.”

As a player, the St. Albert, Alberta native was selected in the sixth round of the 1984 NHL draft by Edmonton after a dominant junior career with the Prince Albert Raiders (WHL) from 1982-86. The dynamic defenseman scored 321 points (60G-261A) in 251 career regular season games, adding 42 points (6G-36A) in 35 playoff games. With his help, the Raiders won the WHL Championship and Memorial Cup in 1985. He also competed for Team Canada at the 1986 World Junior Championship, earning silver.

His professional playing career began with the Minnesota North Stars as he competed in 29 NHL games from 1985-87. He added a strong AHL and IHL stint, scoring 38 goals and 141 assists for 179 points in 249 combined games from 1986-1991. He ventured overseas for the remainder of his playing career, playing in the EBEL and German DEL from 1991-2007, competing for the Austrians at the 2005 IIHF World Championship.

Viveiros and his wife, Laurie, have two sons, Landan (25) and Layne (23). Contract terms will not be disclosed.

Wednesday’s introductory press conference will take place at 3 p.m. at Spokane Arena. Guests will include former and current Chiefs players. The public is invited to attend.