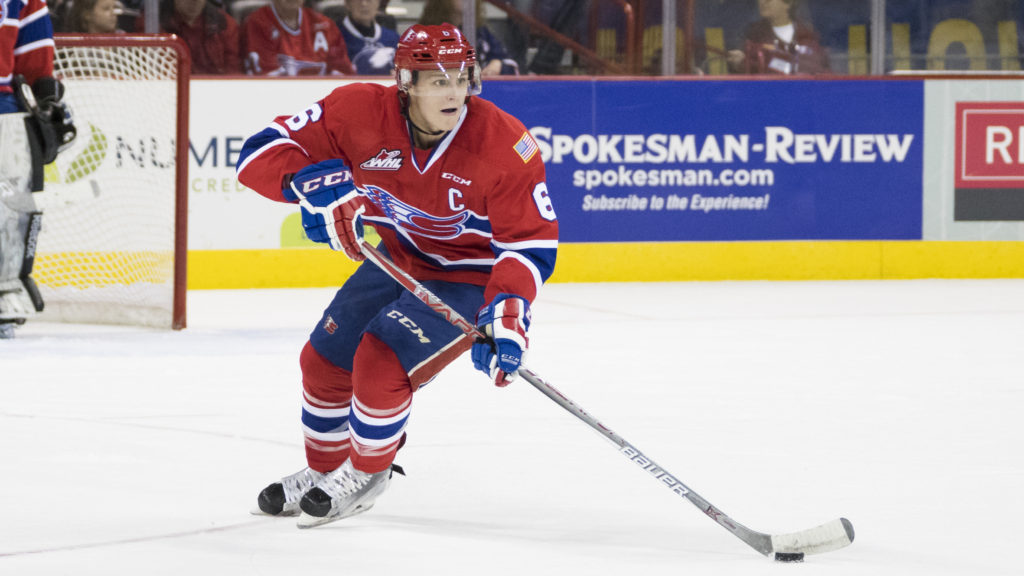 For third-year Spokane Chief Tyson Helgesen, wearing the captain’s “C” not only carries a big responsibility, but also comes with a history lesson.

“It’s a huge honor to be named captain,” Helgesen says, “and I’m looking forward to the challenge. Not only are there lots of good leaders in the room right now, but there have been some really great guys and great leaders wearing the “C” in Spokane.

“In my first year with the Chiefs, when I was 17, I looked up to Calder Brooks, (two-year team captain) Jason Fram and Liam Stewart. It was just the way they carried themselves. No matter how old you were, they treated you as an equal and were always there for you. That’s the kind of leader I want to be.

“It’s my job to encourage everybody day by day to be doing the right thing on and off the ice, and offer advice and help when they need it.”

The Chiefs are particularly young this season, with ten players 17 years old or younger, including three 16-year-olds, so Helgesen knows that patience is an important part of his job as captain. He praises his younger teammates for their eagerness to learn.

“I think this is the best group of young guys we’ve had since I’ve been here. They make it easy for the older players to lead them.”

Helgesen, who is the youngest of four siblings, grew up in a hockey family in Edmonton, but he hasn’t spent much time there since he was 14. He attended the Kelowna (B.C.) Pursuit of Excellence Hockey Academy for two years and spent one season with the Whitecourt Wolverines of the Alberta Junior Hockey League before joining the Chiefs.

“That all seems like a long time ago,” he noted. “The time has just kind of flown by.

“When you’re playing away from home, and especially in the WHL, it helps shape you as a person. You can’t just be a regular teenager. You have a curfew every night and you have to hold yourself to a higher standard.”

Helgesen jumped up to that higher standard early, scoring a goal and an assist over his first four games as a Chief, during the 2014 playoffs. Since then, he’s played in 128 regular season games entering Friday’s matchup against Regina, scoring five goals and adding 41 assists. Four of his five goals have been game-winners.

But most importantly, his work ethic and leadership on the ice have continued to grow and carry weight in the Chiefs’ dressing room.

“I’ve grown up pretty fast, I think, but the guys before me helped me to become a better player and better person than I was when I got here. Playing (in Spokane) makes it easy to get the best out of yourself.”

Something tells us that Helgesen will get the best out of his teammates, too.

Spokane Chiefs Education Advisor Joe Everson works with all Chiefs players, from those still in high school to those pursuing a post-secondary education or preparing to do so following their WHL career. He helped lead the Chiefs to the WHL’s Scholastic Team of the Year Award for the 2015-16 season. Throughout this season, Everson will profile individual Chiefs to provide insight into their lives, their mindset and their goals for the future.