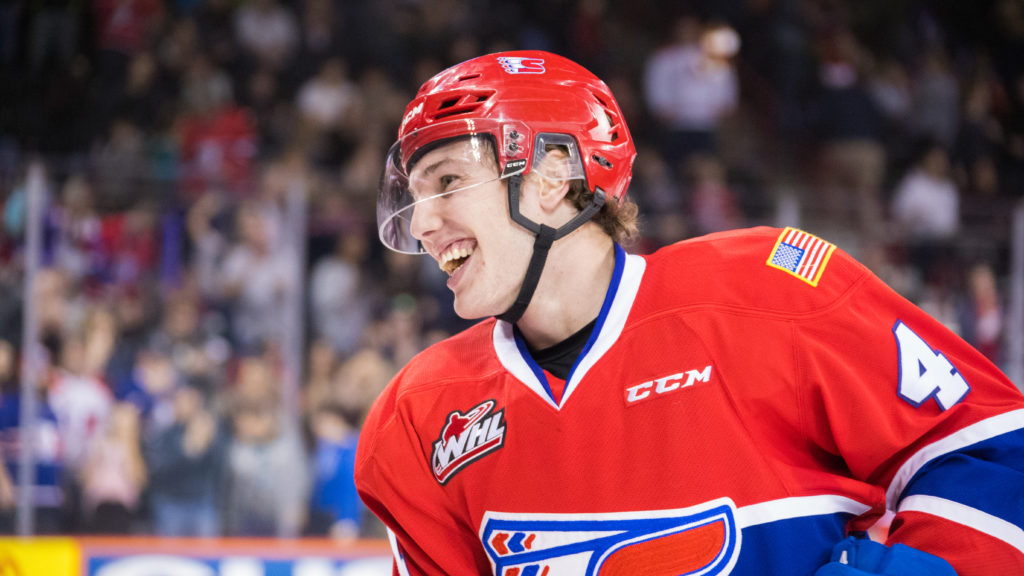 Any fan looking for insights into the journey that is the life of a Western Hockey League player will appreciate the perspective of third-year Spokane Chiefs defenseman Jeff Faith. Faith is an articulate spokesman, as he chronicles the trials and triumphs that come with leaving home at 16 or 17 years old to play hundreds of miles from home in a season that, including preseason and playoff games, stretches to more than 80 games in eight months.

“When I came in as a 17-year-old,” he said, “one of the first things I was thinking about was that I didn’t have to go to school full days and that I had all the freedom that comes with being away from home. It was what I had prepared for and I was super excited.

“It didn’t take long before I got a huge wake-up all, though. It’s a big reality check coming into the WHL, even if you don’t realize it right away. I was on top of the world until I figured out that all the other guys were all-stars in Bantam and Midget, too. Recognizing that when you get to this level, hockey’s not a hobby anymore, requires a big adjustment.

“My first year, the younger guys weren’t really connected with the older players, but that’s one thing that is different now. This year, everybody’s really close. It’s a long season and it can be hard to ‘stay in it’ for that many games, but I’ve learned during the past three seasons how important it is to always be there for your team, no matter how things are going.

“Growing up, I was a leader in school and in my community, so as a veteran player, I support everyone as much as I can. My first season here, I wasn’t a big leader on the team, so my role was to build myself up as a player. Now it’s my time to step up to the plate.”

Faith has been a perfect example of a leader willing to do anything to help the team win. A natural defenseman, the 6-foot-4 native of Wilcox, Saskatchewan has played a good portion of the season up front as a forward, filling in for injuries and providing a strong checking presence. He’s turned that opportunity into career highs in most categories, including goals (5), assists (11), points (16) and plus/minus (+14).

After an inconsistent start to the season, the Chiefs have seemingly turned a corner during the last six weeks, posting an 18-5-2-1 record since the Jan. 10 trade deadline and moving themselves into the top tier of the WHL’s Western Conference. Spokane clinched a playoff berth in late February.

“It took a while to adjust to a new coach and new systems,” Faith said, “but we’ve really started clicking and it’s perfect timing as we get closer to the playoffs. Everyone is really excited about how we’re playing.

Considering his hometown has a population under 500 and all of the time he spends on the ice and in the gym, it’s no surprise that Faith’s non-hockey interests are all outdoors: fishing, hunting, skiing and hiking. When his playing days are over, he hopes to become a pilot, but first he hopes to fly high with the Chiefs in the postseason. He says he’s okay with his outdoors season being cut short by a deep playoff run.

“We all feel that we have a chance to make some noise in the postseason.”