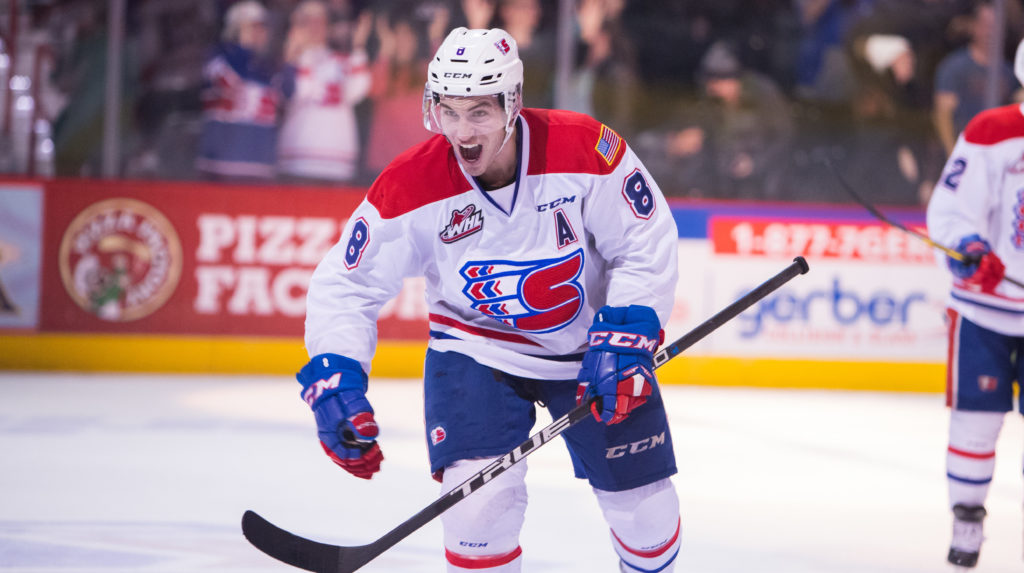 The story of Jake McGrew’s career with the Spokane Chiefs is about making the most of a second chance. His appreciation of that opportunity defines his identity as an athlete and a person.

McGrew remembers every detail of the catastrophic training camp injury which shredded almost every ligament in his right knee and put his hockey career at risk seemingly before it had begun.

The injury came during McGrew’s second preseason with the Chiefs in 2016, he had performed impressively in exhibition play.

“I knew it would be a big season for me going into my draft year, and the coaching staff told me they thought I would make a real impact,” he said. “We had played our last preseason game (at Tri-City), had a day off, then had practice the next day. We were just going through drills and I ran into the goaltender.

“I called my dad, and at first I was like, “why me?”, but he really helped me. He had almost the exact same injury 30 years earlier to the day and told me that he had initially felt the same way. But he also told me that there really aren’t any answers to that (question), and that it was important for me to find a positive way to deal with it.

“Even if the doctors had told me that it was career-ending, I was not going to rule out hockey, no matter what.”

McGrew credits his Chiefs support system – former athletic trainer Todd Daniels in particular – with helping him get back to where he wanted to be. He says that the rehabilitation process was grueling and painful: “There were plenty of times when the coaches would hear me screaming in the training room and walk in to see what was going on.”

“Obviously, it left me with a lot of uncertainty about the draft the next spring. I knew that teams were still interested, especially the Kings and Sharks because I’m a Southern California kid and they had watched me a lot growing up. The Kings brought me in a few days before the draft to do some tests on my knee, and San Jose called me right after that.

“The day of the draft, I just did my regular workout and didn’t really pay a lot of attention, because I didn’t want to be sitting by my phone all day. But when I got off the ice after my afternoon skate, I looked at my phone and had about 100 messages congratulating me on getting picked.”

Despite missing his would-be WHL rookie season entirely, McGrew was drafted by the Sharks early in the sixth round (159th overall). He then posted 38 points (19G-19A) in 65 games, adding two goals and four assists during playoffs following the 2017-18 regular season. He signed his entry-level contract with the Sharks last fall and has gone on to a successful second campaign with the Chiefs, racking up 24 goals and 44 points in 52 games so far.

“Before the injury, my whole life had been hockey, and then I was faced with losing it,” he said. “The whole experience made me a different person and a different kind of player.

“I am humbled by the opportunity and support to get a second chance, and what I went through physically and mentally helped me to appreciate the game in a different way. It made me stronger mentally, because it showed me that I can get through anything, things that might have caused me to give up before. I’ve grown up in so many ways.”

“I know now that every day is a privilege and I don’t take any of them for granted.”