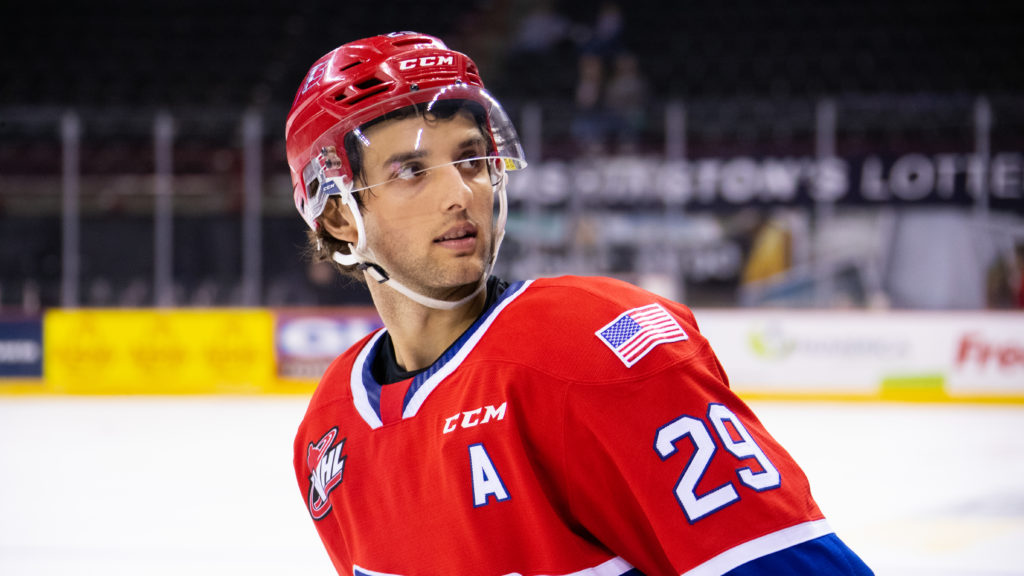 Zummack, chosen by the Red Deer Rebels in the second round of the 2015 Western Hockey League Bantam Draft, was traded the following January to Spokane along with overage forward Wyatt Johnson and two draft picks in exchange for veteran Chief and San Jose Sharks draft pick Adam Helewka.

“Getting traded that early in my career was a real eye-opener,” said Zummack. “Some guys never experience that and it was kind of shocking because I’d gotten to know Red Deer a little bit and also some of the guys at their camps. It was like, ‘Welcome to the league’. It showed me that you never know what’s going to happen.

“At that point, I knew nothing about Spokane. I had only been to the United States three or four times and I had no idea what to expect. But Don Nachbaur (the Chiefs’ head coach at the time) was really good with me. He treated me very well. I was sent home after the last preseason game but I was back a month later for good.

Zummack suited up for two games as an Affiliated Player in October 2016 before being called up permanently in late November. He had posted 20 points (6G-14A) in just 10 games with the Okanagan Rockets of the BCMML, proving himself ready to make the jump.

“It wasn’t long before I fell in love with the city. I love everything about Spokane. The organization is great. We’ve all been super-tight every year, even with all the guys we lose. I’ve had a great time here and have made such great memories. I even come back every summer a couple times.”

Zummack has been reliable up front since his rookie season, playing in 50 games as a 16-year-old and improving his production each year, from 22 points to 41, then 68 and now already 49 through 41 games so far this year. His plus/minus has reflected the same growth year-to-year despite getting tougher assignments, going from minus-nine to plus-one, plus-15 and a current plus-22. The shifty playmaker recently wrapped up a 17-game point streak, posting nine goals and 19 assists for 28 points, marking the longest streak by a Chief since 2013 (Mitch Holmberg).

“Obviously, my experience in the league has contributed to that (improvement),” he said. “I know the league, so I have more confidence. I’ve had opportunities here to play with great players — Kailer and Keanu Yamamoto, Jaret Anderson-Dolan, among others.

“That experience has also helped me adjust to coaching changes (he’s had three head coaches in four seasons). Don had a big impact on me. He was an old-school guy, different from modern coaches. Dan Lambert always helped me to know what I needed to do to improve, and Manny (Viveiros) is so positive, always looking at things in that light”.

Zummack’s role — and that of his teammates — changed when teammate Jake McGrew went down with a season-ending injury after only six games.

“That was a tough loss, not only for Jake but for the team. He brought so much, both on and off the ice. He is the fastest guy I’ve ever skated with, and he is such a great leader for the younger guys. When we lost him, it meant that other guys had more opportunities to step up on the ice, but also as leaders, to show the younger guys how to play the right way the way Jake did.”

Zummack has worn an “A” as an alternate captain for the 2019-20 season and even donned the “C” for the club while regular team captain Ty Smith was away at the World Junior Championship. He has a mature perspective on the change in role and is able to reflect on how his WHL experience has influenced that growth.

“When you come in as a young guy, you just want to keep it simple and get a feel for what it’s like to play at this level, where the pace of the game is so much faster. Then, as you build up experience, leadership comes into it and you want to do what the older guys did for you when you were younger. You become a mentor for the younger guys.”

Zummack is a two-time winner of the Chiefs’ Ken Rabel Most Sportsmanlike Player award and has become an offensive force in the league. Leadership is a role that, along with sharing the puck, seems to come naturally for him.