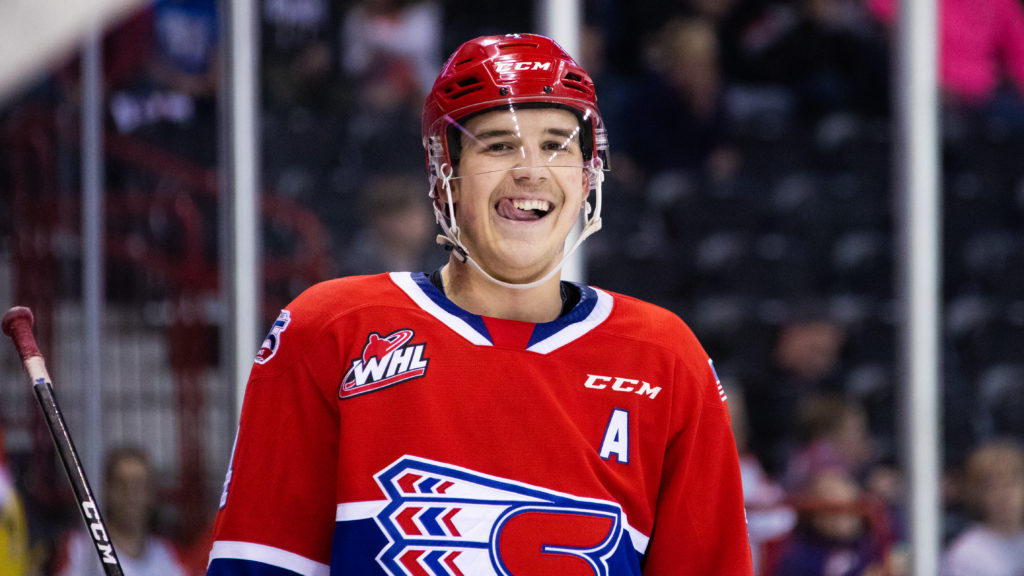 The rest of the Spokane Chiefs don’t need to look far to find a veteran player who has known both the best of times in the Western Hockey League and also the worst. They’re sharing the ice with him.

When the Chiefs acquired Noah King in a trade with Swift Current in December of 2018, they were getting a 19-year-old “stay-at-home” defenseman who had been a key member of the Broncos’ WHL championship team the season before. Last season, however, the Broncos turned over more than half of their roster and began a rebuilding season, winning just four games by the time of the trade.

“I hadn’t been through a trade before,” King said, “so it was a crazy experience. Going from the Memorial Cup team to last year in Swift was difficult, but I tried to stay positive in the locker room and on the ice. I wanted to show the guys there that it’s possible to enjoy every day, even when it’s a challenge.”

The welcome he got in Spokane from the organization, including teammates and coaches, made it easier for him, he said.

“When you’re younger, you don’t think you’ll ever be traded,” he reflected. “You develop all these relationships with your billets and in the community. But what I learned about myself is that I could build new relationships.”

When he got to Spokane, he tried to step into a leadership role, but last year’s team had so many leaders already that the Chiefs didn’t need another, he said. After an initial adjustment period, that changed. As the team improved, so did he.

This year, as one of the Chiefs’ three 20-year-old “overage” players, he has taken on a new role in leading by example, he says, but also becoming more vocal.

It didn’t hurt that he was joined in Spokane by his former Swift Current coach, Manny Viveiros, after former Spokane head man Dan Lambert was hired as an assistant coach by the NHL’s Nashville Predators.

“It was great for me,” King said, “but I was also excited for him. He had a whole new organization and a whole new team, so having even one familiar face around can make a difference. He didn’t have to get to know me and he knew what I would bring every night.”

That includes contributing more at the offensive end. After scoring only three goals in 116 games in Swift Current, he’s posted seven in 88 games as a Chief (regular season and playoffs), including 16 points (3G-13A) this season. He’s also turned his plus/minus around, standing at +19 through the first 31 games.

In hindsight, King points to the transition from Swift Current to Spokane as a positive; an experience that changed him for the better, particularly off the ice.

“My hockey experience matured me more quickly. I had to become independent, learn to be resilient and take on new challenges.

“In order to be successful, you can never give up. Hockey has been a huge part of my life. I’m excited to be where I am right now and excited to see where life will take me.”