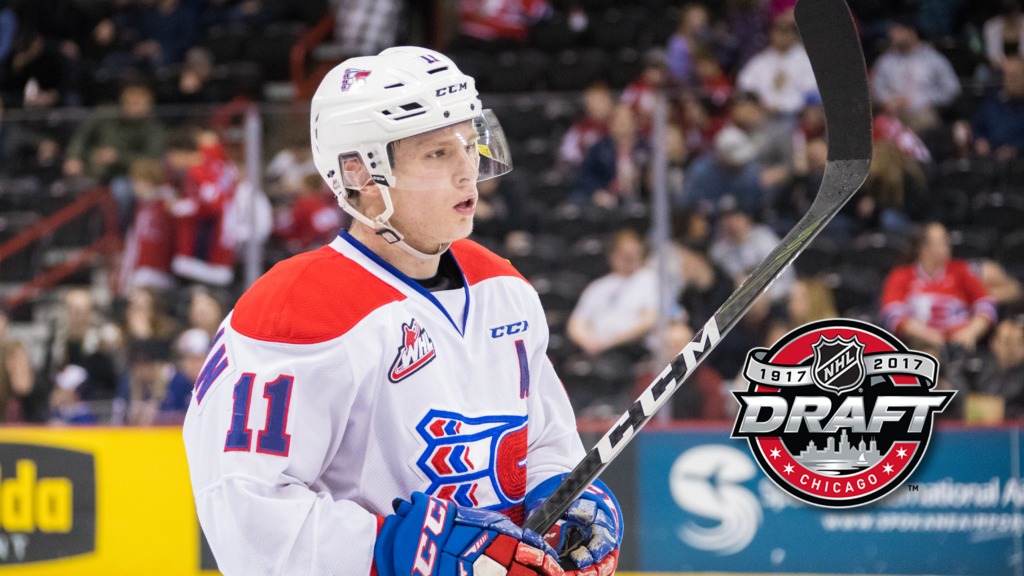 Spokane Chiefs forward Jaret Anderson-Dolan piled up 39 goals and 37 assists for 76 points during his 17-year-old season, putting him firmly on NHL radars ahead of this weekend’s 2017 NHL Entry Draft in Chicago.

After a solid rookie season in 2015-16, during which the Calgary native scored 14 goals and 26 points, Anderson-Dolan made a huge jump in production and became just the fourth Chief in franchise history to score 30+ goals as a 17-year-old. He finished 31st on the WHL’s scoring list while recording 18 multi-point games, seven multi-goal games and three hat tricks. “JAD” also lined up a six-game goal streak from Jan. 27-Feb. 10.

Anderson-Dolan was originally a first round pick (14th overall) by the Chiefs in the 2014 WHL Bantam Draft out of the Edge School in Calgary.

His breakout sophomore campaign was rewarded with a roster spot on Team Canada at the 2017 U18 World Championship, where he wore the “C” as team captain.

Related Links
NHL Tonight: Jaret Anderson-Dolan WHL: Hard Work Key For Anderson-Dolan NHL.com: Anderson-Dolan Could Be Inspiration
Anderson-Dolan is a two-way, versatile forward who skates very well and can play in any situation at any time. His most eye-catching trait for fans is likely his wrist shot, notable for its quick release (evident in his 39 goals scored last season). At 5-foot-11 and 180 pounds, “JAD” is on the small-to-average side of the size chart, but his low center of gravity and core strength allow him to play bigger than expected and win puck battles. On the defensive side, his skating ability and hockey IQ allow him to be aggressive on the forecheck and penalty kill, especially.

A hard-working versatile forward who can play a gritty or finesse game…skates extremely well and loves to get low and drive off his low center of gravity to burn around players…very balanced on his feet, enabling him to change direction with quick pivots…leans on his stick and is very good at protecting the puck from being stripped…plays a lot bigger than the listed size and is an absolute menace with the puck on his stick…does not hesitate to shoot the puck and has a good release with velocity that is likely to continue developing…great vision and is confident putting pucks through tight space to make a skilled pass…makes smart reads on puck movement…a constant factor when on the ice…defensive awareness is strong…constantly on his toes to play the routes of high probability with a waiting stick…is that heart and soul, all hustle player who attacks from the defensive side of the puck and can be relied upon in all zones…has the potential to become a strong pro middle six two-way player. (November 2016)

Really smart, quietly competitive and difficult to deter. Ability to contribute in all situations.

Has more skill than we had given him credit for earlier. One of the youngest in this class is maturing much faster than expected.

Anderson-Dolan projects most likely to be an early second round draft pick, but his stock continued to rise throughout the season, suggesting he could sneak into the first. He moved from 40th in the mid-term to 21st in the final NHL Central Scouting rankings (North American skaters) and is one of the youngest draft-eligible players this year, with his birthday (Sept. 12) falling just three days before the draft year cutoff. Torie Peterson at calgaryflames.com has him going 30th to Nashville.

Where will Jaret Anderson-Dolan be drafted?