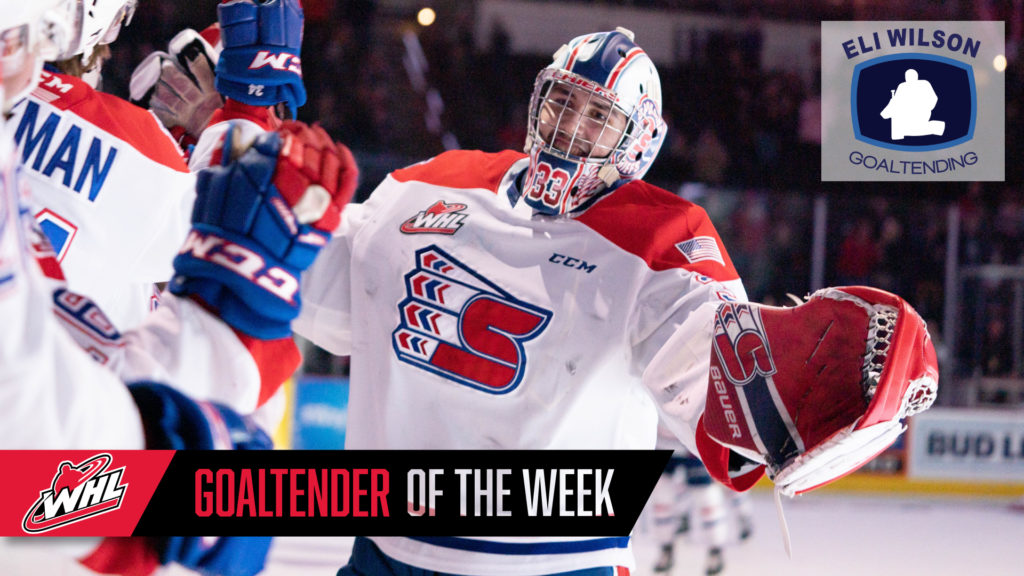 The Western Hockey League announced today that Spokane Chiefs goaltender Lukáš Parik has been named the WHL Eli Wilson Goaltending Goaltender of the Week for the week ending March 15, 2020. Parik made 36 saves and scored a goal in the Chiefs’ 3-0 blanking of the Kamloops Blazers on Tuesday, March 10.

Parik, who was selected by the Los Angeles Kings in the third round of the 2019 NHL Entry Draft, became the ninth goalie in WHL history and first Chief to score a goal. He is the first to score a goal and record a shutout in the same game.

Parik withstood an 18-shot barrage from the B.C. Division champion Blazers before the Chiefs settled in and leveled the ice, allowing seven shots in the second and 11 in the third. The shutout was the first of his WHL career. Prior to Tuesday, Parik had allowed just one goal on seven different occasions and posted a save percentage over .940 eight times.

Despite missing time with the Chiefs while away at the 2020 IIHF World Junior Championship and due to injury, the Neratovice, Czech Republic native piled up 22 wins for Spokane prior to the play stoppage, posting a 22-7-2-0 record. He had won seven in a row, boasting a 2.73 GAA and .917 SV% for the year.