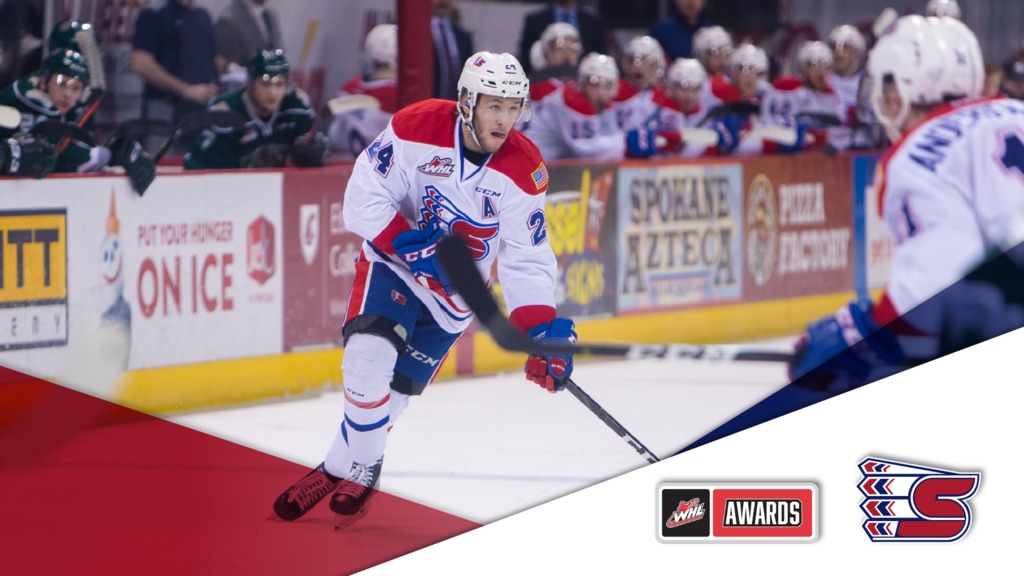 With Western Hockey League award season set to get under way on Wednesday as the league reveals the 2018-19 season’s award-winners, defenseman Ty Smith has a chance to bring home some hardware this season. Spokane has a strong history of producing award-winning talent in numerous facets of the game with a member of the organization being selected for league honors 20 times over the last 30 years.

Named after the four members of the Swift Current Broncos that tragically died in an accident in December of 1986, the Four Broncos Memorial Trophy is the most highly coveted individual award in the WHL, presented to the player with the strongest on-ice performance during the season.

The last Spokane Chief to win the award was two-time NHL All-Star and Stanley Cup Champion Ray Whitney, who earned it following his 1990-91 season. Whitney totaled 185 points, scoring 67 goals and dishing out 118 assists through 72 games. He set numerous Chiefs all-time single season records, including most goals in a game (five), consecutive games with an assist (22), consecutive games with a point (27), most assists in a season, and most points in a season.

The most recently-won award by a Chiefs player, the Daryl K. (Doc) Seaman Trophy is awarded each season to a WHL player whose commitment to excellence extended off the ice and into the classroom. The award is named after Daryl K. (Doc) Seaman, who has for many years been a pioneer in promoting higher education and hockey.

Following the 2017-18 season, defenseman Ty Smith became the third Spokane Chiefs player to be named the WHL Scholastic Player of the Year, following in the footsteps of Reid Gow, who won in 2012 and Kyle Rossiter, who took home honors for his 1997-98 season. Smith was the recipient of several Chiefs team-specific awards this season, including Player of the Year, John “Hitman” Hern Defenseman of the Year and Ken Rabel Most Sportsmanlike Player.

True to name, the Bob Clarke Trophy is awarded to the Western Hockey League’s leading scorer each season. Clarke led the WHL in scoring in each of the seasons he played in the league before going on to achieve NHL greatness, compiling 271 points in just 117 career WHL games.

A Chiefs’ player has led the league in scoring on two occasions, the most recent of which coming in 2013-14 when forward Mitch Holmberg scored 64 goals and had 56 assists in his final season in Spokane. Ray Whitney also won the award after leading the WHL in scoring during the 1990-91 season.

An award presented to a player who stands out as combining talent, desire and an unmistakable sportsmanlike attitude, this award is named after a player who demonstrated those very attributes following a tragic in-game accident in March of 1987 that left him paralyzed.

Spokane native and Tampa Bay Lightning star Tyler Johnson won the award for his 2010-11 campaign, becoming the third Chiefs player to take home the honors. The previous two winners came in back-to-back seasons with Pat Falloon in 1990-91 and Steve Junker in 1991-92.

An award that has been given to a U.S. Division-player in four of the last five seasons, the Bill Hunter Trophy goes to the most impactful d-man in the league each season. Hunter was the driving force that kept the WHL in the forefront of Major Junior Hockey in Canada during his years as the “Godfather” of the Edmonton Oil Kings.

Brenden Kichton won the award after his 2013-14 season with the Chiefs when he led all WHL blueliners in points with 85. Kichton finished his five-year WHL career with 268 points (67 goals, 201 assists) and 333 regular season games player, all with Spokane. He was twice drafted by NHL teams, New York Islanders in 2011 and the Winnipeg Jets in 2013.

Worthy of note, Chiefs Head Coach Dan Lambert was named the 1988-89 WHL Top Defenseman when he was a player for the Swift Current Broncos. That season, he logged 102 points (25 games, 77 assists) through just 57 games for the Broncos.

WHL Rookie of the Year

The Chiefs are yet to have a player win the league’s Rookie of the Year award, but have had numerous seasons in which they received significant contributions from first-year players. Former second round NHL draft pick Maxim Betts holds the Chiefs franchise record for points, goals, and assists by a rookie with 106 points, 49 goals, and 57 games during the 1992-93 season.

Each season, the most highly regarded goalie in the Western Hockey League is presented with the Del Wilson Memorial Trophy. Wilson was an owner, Governor and General Manager of the Regina Pats and served six years as Chairman of the Board, as well as the WHL’s Referee-in-Chief. He passed away in November of 2015 at 88 years of age.

A Spokane Chiefs player has won the award twice, most recently when David Lemanowicz was honored with the distinction following the 1995-96 season. Lemanowicz led the WHL in a variety of goaltending stats, including games played (63), GAA (2.89), wins (42), and shutouts (4). In addition to holding the franchise record for most wins in a single season at 42, he’s also stakes claim to the longest shutout streak in Chiefs history at 180:54 as well as the longest unbeaten streak in a single season at 12 games.

Former Chiefs goalie Troy Gamble was the first member of the organization to win the award when he received the honor for his 1987-88 campaign. Gamble led the WHL that season in games played with 67 and ranked third in goals against average at 3.69.

Honoring the late Dunc McCallum who compiled a 251-123-41 record during his tenure as the head coach of the Brandon Wheat Kings, then-Chiefs Head Coach Don Nachbaur was named the WHL Coach of the Year following the 2010-11 season. That year, Nachbaur’s team had separate winnings streaks of nine and seven games en route to a 48-18-4-2 record and Western Conference Championship appearance.

The only award to be won multiple times by the same member of the Spokane Chiefs organization, the Lloyd Saunders Memorial Trophy acknowledges and front office member each season that has made outstanding contributions to and support of Junior Hockey. Former Chiefs General Manager Tim Speltz was named the WHL Executive of the Year for both the 1995-96 and 1999-00 seasons. Speltz currently holds the title of Head of Amateur Scouting for the Toronto Maple Leafs of the NHL.

Jim Loria was named the first ever winner of the award following the 1987-88 season.

In 2001, the WHL Humanitarian of the Year award was named after Doug Wickenheiser on account of his contributions to the league both on and off the ice.

Spokane’s Brandin Cote won the award for the 2001-02 season. In addition to winning the WHL’s award, Cote was named the Humanitarian of the Year for the entire Canadian Hockey League. He currently serves as an Assistant Coach of the Swift Current Broncos.

The WHL Plus-Minus Award goes each season to the player who made his presence felt on the ice more greatly than anyone else. The Chiefs have twice had the league’s leader in plus-minus, coming in the 1995-96 season when Hugh Hamilton went +59 on the year as well as when Frank Evans was +72 in 1990-91.

Beginning with the 1992 postseason, the league awarded the Playoffs MVP Award to the most player who contributed the most value to his team’s postseason efforts during their playoff run. To date, the only Chiefs player to win the award was Tyler Johnson in 2008, when the team went on to win the Memorial Cup. At the time, Johnson was a 17-year-old rookie for the Chiefs. He tallied eight points on five goals and three assists through 21 postseason games.

The league began recognizing the playoff’s top performer in 1992, one year after Spokane won their first WHL title.