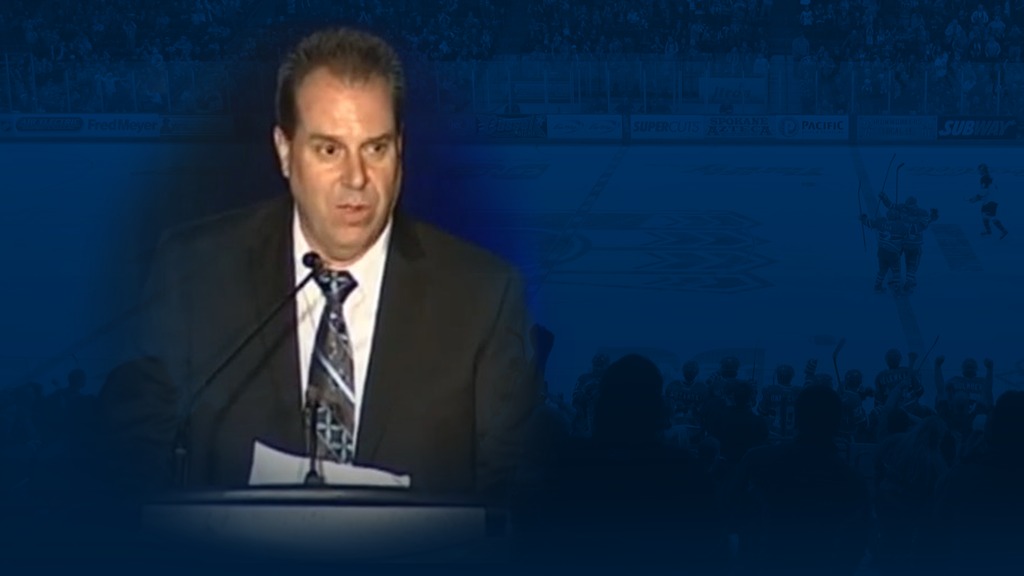 SPOKANE, Wash. – Scott Carter received the best birthday gift he could ask for on Thursday afternoon: he was officially introduced as the Spokane Chiefs’ new general manager.

“I stood before you 17 days ago to make the announcement that Tim Speltz was moving on and that the process would start at that time,” Bobby Brett, the Chiefs’ managing partner said at the conference. “Scott stood out for a number of reasons. He has a varied resume and has a tremendous passion for hockey and work ethic.”

“We draft and sign what we call ‘Chief type’ players,” Brett continued, “and wanted a guy that would fit into that culture but also bring new ideas. We’re always looking for ways to get better. The more I got to know Scott and checked in with his references, it was clear that we made the right choice.”

Carter, of Penticton, B.C., has over 28 years of experience as a hockey scout, business manager and entrepreneur. From 1987 to 2015, he worked as a regional professional and amateur scout for three National Hockey League franchises – Vancouver, Anaheim and Toronto – scouting the Western Hockey League and British Columbia Hockey League. He just recently completed a consulting position with the Canadian Sport School Hockey League.

“Thank you to Bobby and the ownership group for providing this great honor,” Carter expressed after being publicly introduced for the first time. “Following a guy like Tim Speltz, who is really a legend in the Western Hockey League, built a great staff and created an unbelievable blueprint… I don’t have to do a whole lot to change things. Just follow the blueprint and bring new ideas where I can.”

“I met (Director of Player Personnel) Chris Moulton, (Head Coach) Don Nachbaur, the coaching and training staff,” Carter noted. “The one word that kept coming back after meeting more and more people in the Chiefs organization was ‘family’. There is a family atmosphere here and that is very important.”

In 2004, Carter organized a community ownership group to purchase the Penticton Vees of the BCHL. As President and General Manager, he was voted the league’s Executive of the Year in 2005. The Vees have transformed into a Junior “A” powerhouse, culminating in a Royal Bank Cup (national championship) in 2012.

In 1991, he co-founded the British Columbia Hockey Hall of Fame in Penticton, B.C., a non-profit society honoring important figures in the province’s hockey history. The Hall has since become a respected institution, raising over $2 million to date for British Columbia charities.

Carter boasts a strong business acumen as he has been involved with Vaughn Custom Sports, a world leader in goaltending equipment, since 1983. He became a part owner and President of the company in 1996. He was also instrumental in building a partnership between Vaughn Custom Sports and Hockey Canada to update their goaltending development program.

He was also a co-founder of the Western Professional Hockey League in 1994, researching and establishing six original franchises in non-traditional hockey markets. He sold his shares in 1996 to become a full partner in Vaughn.

Carter replaces Tim Speltz, who stepped down after 26 years in the same position after accepting a job with the NHL’s Toronto Maple Leafs.

The Spokane Chiefs open the 2016-17 regular season on the road on September 24 before kicking off the home schedule with Bud Light Opening Night & Pre-Game Party on Saturday, October 1 versus the Tri-City Americans at Spokane Arena. Ticket packages are on sale now and start as low as $70. For more information, stop by the Chiefs’ Ticket Office in-person on the southeast corner of Spokane Arena, call 509-535-PUCK or click here. For single game tickets, click here.