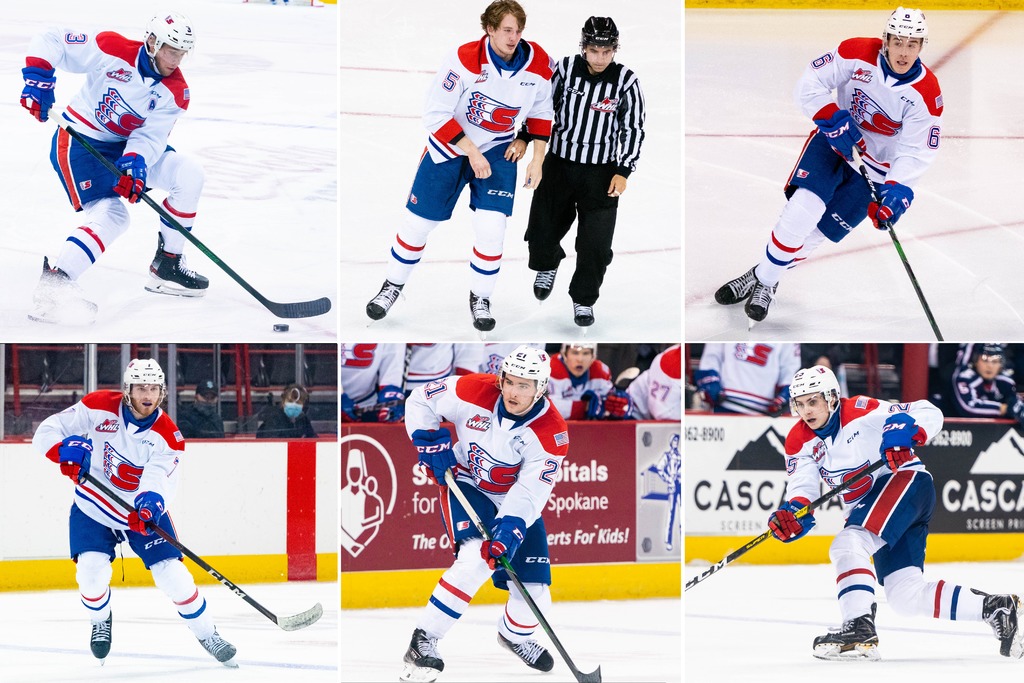 As we close the book on the 2020-21 Western Hockey League season–one that overcame a myriad of obstacles in order to continue player development–we take a look back at the strides made by the Chiefs on the ice.

We opened our Season in Review series by taking a look at the Chiefs’ rookie skaters before diving into the performances by the team’s veteran forwards in 2020-21. Today, we recap the contributions Spokane received from their veteran defensemen.

This year’s crop of blueliners had some big shoes to fill with the departure of Co-Defensemen of the Year and NHL prospects Ty Smith and Filip Kral in addition to 2019-20 WHL plus-minus leader Noah King. The team used a combination of experienced vets–two of the team’s three overage players were defensemen–and up-and-comers to build the foundation of what should be a strong defensive unit for years to come.

After playing all 21 games of the 2020-21 season, Leduc finishes his WHL career with 174 games played, all as a Chief. Named one of Spokane’s alternate captains prior to the season, Leduc matched his career high in points while playing his typically tough, heavy-hitting defense. The Richmond, BC native was also the recipient of the 2020-21 Chiefs’ Players’ Player Award.

Chudley spent the 2020-21 season doing what he’s done since joining the Chiefs prior to the 2019-20 season: establishing himself as a physical presence in the Chiefs’ defensive zone. The Souris, MB native had an assist vs. Portland on April 10 when he matched a career best with a +2 rating.

A 2017 third-round bantam selection by the Chiefs, Gross debuted with a 27-game stint in Spokane during the 2019-20 season. This season, he appeared in 16 games, connecting for his first career Western Hockey League goal on March 21 at Portland.

Sward was limited to just 11 games in 2020-21 as he was forced out of action due to injury. He connected for his lone goal of the season on May 4 against the Tri-City Americans. The 2018 first-round bantam pick revealed to rank 117th on the final 2021 NHL Central Scouting Service Draft Rankings following the completion of the season.

One of Spokane’s two overage defensemen, Russell saved his best WHL season for last as he compiled 12 points through 21 games. His three assists against Seattle on May 1 accounted for his first career three-point game, and his +3 rating on April 10 vs. Portland matched a personal best.

In 21 games played this season, Wiles recorded 10 points on a goal and nine assists while posting a +1 rating. The second-year blueliner had a career night on May 1 against Seattle when he registered a pair of assists en route to posting a +5 rating on the night. He followed that performance up with another two-assist game the following night against Everett. His breakout season earned him the distinction of being named the Chiefs’ 2020-21 John “Hitman” Hern Defenseman of the Year