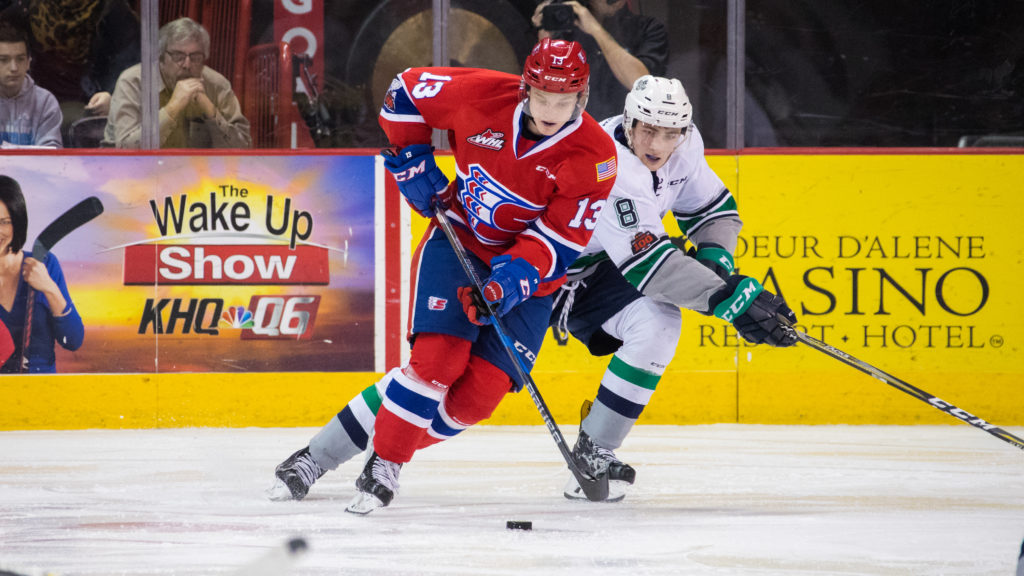 KENNEWICK, Wash. — The Spokane Chiefs fell to the Seattle Thunderbirds 3-2 on Thursday afternoon in pre-season action at the Toyota Center in Kennewick. Forwards Carter Chorney and Adam Beckman continued their hot exhibition performances, picking up a goal apiece.

Chorney, a second-year forward from Sherwood Park, Alta., opened the scoring with a shorthanded goal at 9:41 of the first period, streaking through the middle of the ice past two Thunderbirds defenders before flipping a forehand shot past Seattle goaltender Liam Hughes to make it 1-0.

Seattle bounced back with a power play goal from Andrej Kukuca early in the second before Beckman put the Chiefs ahead once again, scoring his WHL-leading fifth goal to make it 2-1 near the midway point of regulation.

The Thunderbirds responded once again as Matthew Wedman scored his first of the pre-season, also on a power play, with only 17 seconds remaining in the middle frame, to make it 2-2.

Despite Spokane leading in shots on goal in the third period 14-4, it was Seattle who scored the game-winner as Wedman punched in his second of the night with 3:33 left.

The loss drops Spokane to 2-1-1-0 through four pre-season games. They face the Tri-City Americans in Kennewick on Saturday at 7:05 p.m.

Spokane outshot the Thunderbirds 36-26 for the game. The Chiefs finished 1-for-4 on the power play and 6-for-8 on the penalty kill. Campbell Arnold started in goal for the Chiefs and made 23 saves while Hughes made 34.