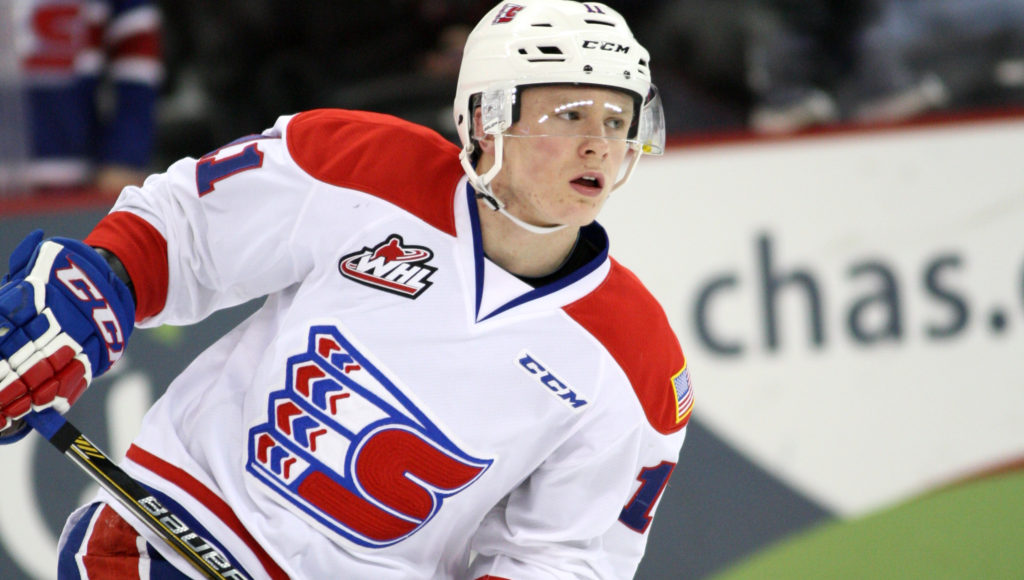 KAMLOOPS, B.C. – The Spokane Chiefs scored the first goal of the game, on a set play with a man advantage capped by forward Jaret Anderson-Dolan, but allowed six-straight unanswered to close it out, losing 6-1 to the Kamloops Blazers on Wednesday night. The loss drops the Chiefs to 2-4-0-0 on the season.

The Chiefs drew first blood on a power play at the 2:20 mark of the first period as Ondrej Najman deflected a stretch pass to Keanu Yamamoto streaking down the right wing. Yamamoto slipped a cross-crease pass to Anderson-Dolan his third goal of the season.

From there it was all Blazers as they scored three within the final seven minutes of the first period – from Ondrej Vala, Collin Shirley and Dawson Davidson – to head into the locker room down 3-1.

It didn’t get any better in the middle frame as Spokane allowed three more goals, this time within 3:01 of each other, beginning with Nolan Kneen’s tally at the 9:23 mark. Vala and Davidson each scored their second of the night to cap the scoring at six for Kamloops.

Dawson Weatherill, a day removed from a stellar 44-save performance against the Seattle Thunderbirds, got the nod in goal to start and stopped 13-of-18 shots in 30:02. Jayden Sittler came on in relief and allowed one goal on 17 shots faced in the final 29:58. Connor Ingram started for the Blazers and made 29 saves.

The Chiefs’ penalty kill allowed two goals in three shorthanded situations while the power play scored once in five tries.

Spokane returns home on Friday, October 14 for a contest against the Everett Silvertips. It will be Dairy For Life Night at Spokane Arena as fans will be able to take part in a special raffle benefiting Dairy For Life and Second Harvest Inland Northwest to provide dairy products for families in need. Prizes include authentic jerseys and signed memorabilia.

Tickets for Friday night and all Chiefs home games are available in-person at the Chiefs’ Ticket Office, over the phone at 509-535-PUCK and online at spokanechiefs.com and ticketswest.com.