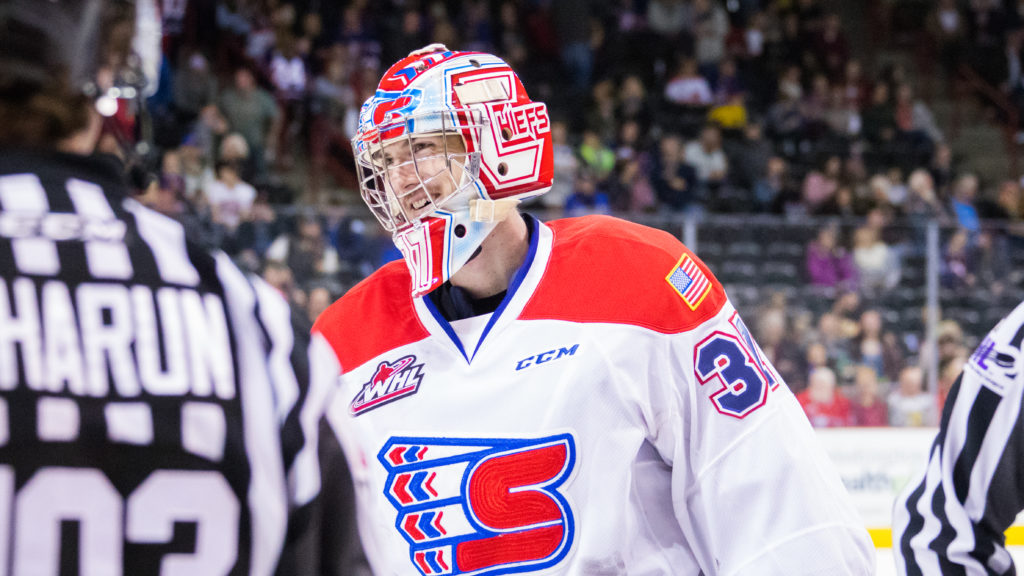 KENNEWICK, Wash. – Goaltender Dawson Weatherill made 30 saves while forwards Jack Finley and Ethan McIndoe scored two goals apiece to lead the Spokane Chiefs to a decisive 5-1 win over the rival Tri-City Americans on Saturday night in Kennewick. Spokane finished the 2018 WHL pre-season with a 4-1-1-0 record.

After a scoreless first period, rookie forward Finley got the Chiefs on the board with his second goal of the pre-season at the 2:04 mark of the second. The 16-year-old is eligible to play his first full-time WHL season this year after being selected in the first round (6th overall) of the 2017 bantam draft.

Russell found the net for himself early in the third period, extending the Chiefs’ lead to 3-0 with his first goal of the exhibition slate at 6:23, with help of an assist from fellow former Kootenay ICE player Michael King.

Tri-City defenseman Bryan McAndrews scored to make it 3-1 at 12:02 of the final frame, but the Chiefs were ready to respond.

McIndoe potted his second of the night on the power play for an insurance goal at 17:06, pushing out of reach at 4-1. Finley scored his second 1:30 later with an assist to Luke Toporowski, his third of the night.

Weatherill, who recently returned from the Boston Bruins’ rookie camp, was stellar in goal for the Chiefs, allowing only one goal on 31 shots faced.

The Chiefs open their regular season schedule against the Americans on Sept. 22 in Kennewick.