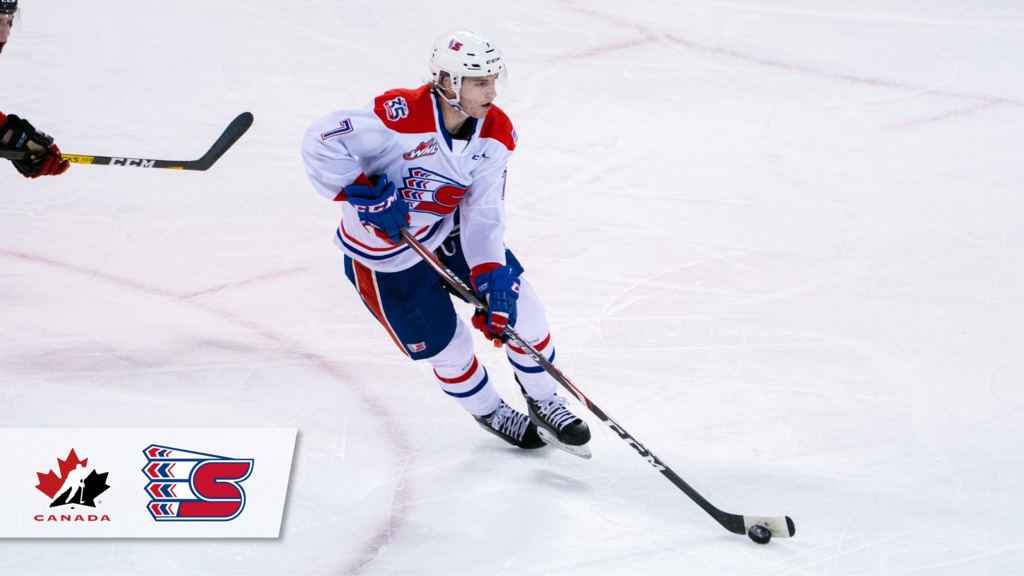 Calgary, Alta. – Spokane Chiefs defenseman Graham Sward was one of 12 Western Hockey League players recognized by Hockey Canada with an invitation to Canada’s National Men’s Summer Under-18 Team selection camp. The team would have competed in the now-cancelled 2020 Hlinka Gretzky Cup.

Sward, a 2003-born rearguard from Abbotsford, B.C., had an immediate impact for the Chiefs as a rookie during the 2019-20 season. He picked up two goals and 15 assists for 17 points in 55 games, earning a plus-12 rating while being thrust into a top-four role as a 16-year-old. He was Spokane’s first-round (17th overall) pick in the 2018 WHL Bantam Draft.

In all, six goaltenders, 14 defensemen and 26 forwards were set to compete for a chance to represent Canada at Hlinka Gretzky Cup, which was scheduled for August 3-8 in Edmonton and Red Deer, Alta., before it was cancelled April 28 due to the coronavirus (COVID-19) pandemic.

“It is important for Hockey Canada to recognize the work the players and coaching staff already put in to prepare for the summer and a chance to compete for gold on home ice,” said Scott Salmond, senior vice-president of national teams for Hockey Canada. “It was a difficult decision to cancel the tournament, as it provides the opportunity to showcase the top under-18 players in a best-on-best international showcase. We want to recognize the 46 players and our three coaches for this tremendous accomplishment, and we look forward to watching all players continue to develop as they look ahead to next season and a chance to compete at the IIHF U18 World Championship.”

In 2018, the tournament was rebranded as the Hlinka Gretzky Cup and hosted in Canada, with Edmonton and Red Deer, Alta., serving as co-hosts. In 2019, Canada earned silver in Breclav, Czech Republic following a 3-2 loss to Russia.

Canada has won gold 22 times in 28 years of summer under-18 competition, along with three silver medals and one bronze.

With the cancellation of the Hlinka Gretzky Cup, focus will now turn to the 2021 IIHF U18 World Championship next spring; a host city has not yet been announced. The Czech Republic and Slovakia will host the 2021 Hlinka Gretzky Cup before it returns to Edmonton and Red Deer in 2022.

For more information on Hockey Canada, Canada’s National Men’s Summer Under-18 Team and the 2019 Hlinka Gretzky Cup, please visit HockeyCanada.ca, or follow through social media on Facebook, Twitter and Twitter.com/HC_Men.