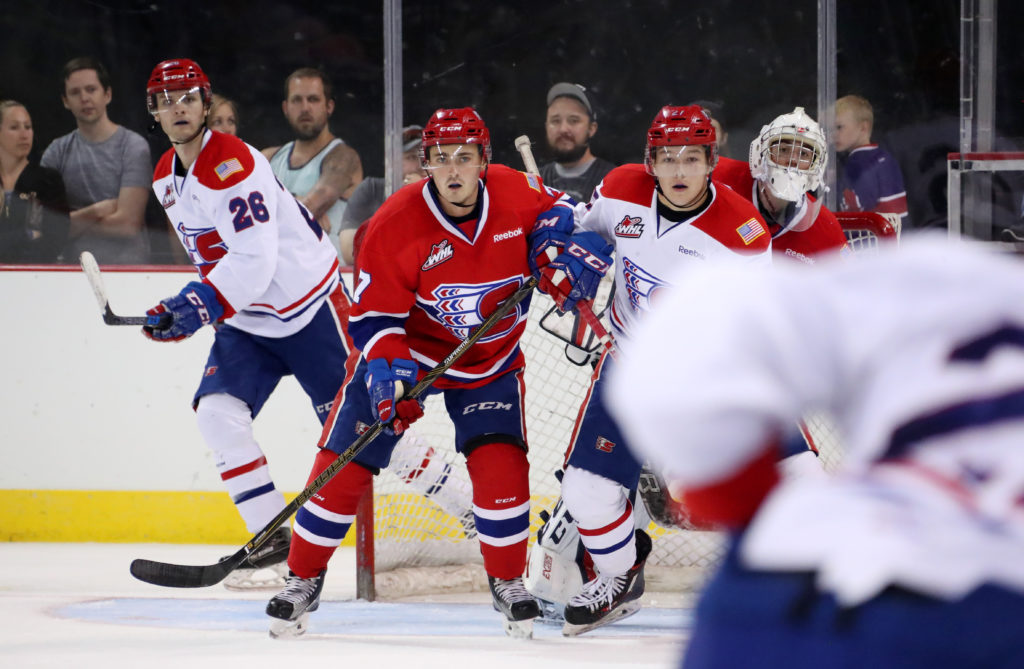 SPOKANE, Wash. – Offense was on display in full force on Sunday afternoon at Spokane Arena as Team White piled on seven goals in a 7-4 win over Team Red in the Spokane Chiefs’ annual Red-White Game capping their 2017 Training Camp. Riley McKay led Team White with two goals and two assists, earning one of two Player of the Game awards.

Adam Beckman got the scoring underway at the 17:09 mark of the first period, tapping in a cross-ice feed from Cedric Chenier to give Team White an early 1-0 lead. McKay also earned an assist on the play.

Team Red responded early in the second period as Riley Woods chipped in a power play goal to tie it up at the 1:21 mark. Woods’ pass deflected off a Team White defender and fooled Red’s starting goaltender Donovan Buskey to the top-right corner.

White responded with three-straight goals to close out the second period, taking a commanding 4-1 lead into the intermission.

Former first round WHL Bantam Draft pick Luke Toporowski found the back of the net off a behind-the-goalie pass from Cordel Larson at the 3:55 mark to make it 2-1.

McKay scored to make it 3-1 at the 13:45 mark, tapping in an easy one after a beautiful tic-tac-toe play from teammates Kailer Yamamoto and Hudson Elynuik.

Forward Damon Zimmer showed some strength 1:15 later, splitting the defense to corral a loose puck and drive to the net to make it 4-1 in favor of Team White, with an assist going to Jake Toporowski.

Jaret Anderson-Dolan found the net at the 3:21 mark of the third period, backhanding a Tyson Helgesen rebound in to make it a 4-2 game.

Team White struck right back as Yamamoto picked up his second point of the night to make it 5-2 with just over 14 minutes left in regulation.

Ty Smith got in on the action for Team White after a smooth off-the-wall pass from Dalton Hamaliuk sprung him free in the high slot, from where he snapped a wrist shot inside the left post. The goal, also assisted by Beckman, put White ahead 6-2 with 12:42 left in the third.

White continued to pour it on as McKay found the net again at the 11:33 mark, sneaking in a second chance opportunity that deflected off a Team Red skate to find the twine and make it 7-2.

Red refused to give up but it was too little, too late as Taylor Ross and Carter Chorney scored at 13:07 and 17:26, respectively. Ross’ goal came off assists from Eli Zummack and Helgesen, while Chorney’s came from former Spokane Braves teammates Carter Jones and Luke Gallagher.