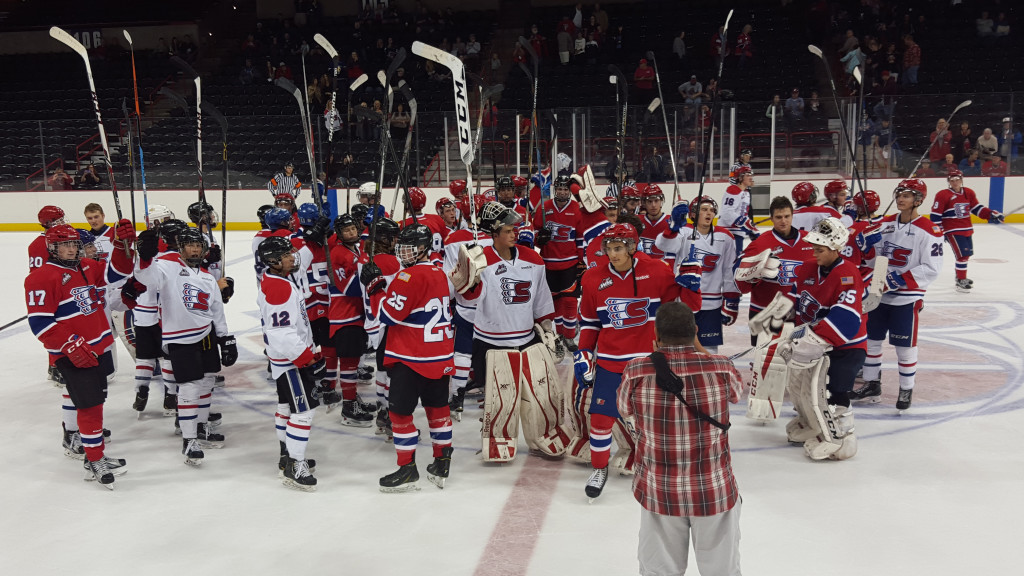 SPOKANE, Wash. – Team White used a five-goal second period to bully their way to an 8-1 win over Team Red in the Spokane Chiefs’ annual Red-White Game on Sunday afternoon at Spokane Arena. The intrasquad scrimmage marked the culmination of the organizations 2015 Annual Fall Camp, as returning players and young prospects competed all week to make an impression on scouts and management.

Defenseman Matt Sozanski opened the scoring just 1:03 into regulation, using an assist from Kailer Yamamoto to put Team White up 1-0.

Keanu Yamamoto cut Team White’s lead to one with a power play goal just before the horn in the first period. With just two seconds remaining, Yamamoto punched in a rebound off a Dominic Zwerger shot, beating goalie Garret Hughson. White took their 2-1 lead into the locker room for the first intermission.

Team White came out firing on all cylinders for the second period, scoring just at the 2:28 mark as San Jose Sharks 2015 NHL Draft pick Adam Helewka chipped in a rebound created off a Jaret Anderson-Dolan shot.

Overage forward Riley Whittingham pushed the Team White lead to 4-1 with a nifty move down the right wing capped with a shot over goaltender Donovan Buskey’s left shoulder. Hudson Elynuik earned the assist on the play.

Prospect Carter Barley, a 1999-born forward, made his mark on the stat sheet midway through the second frame, tapping in a goal after a fantastic backdoor pass from McGrew. Fellow prospects Cedric Chenier and Michael Outzen paired up for a tally at the 15:26 mark of the period to make the score 6-1 in favor of Team White.

Kailer Yamamoto took full advantage of a breakaway opportunity late to cap the scoring on the second period. Young forward Noah Westgate earned the assist on the play at the 16:39 mark.

Yamamoto struck again, lighting the lamp just over one minute into the third and final period to cap the scoring at 8-1. Helewka and Anderson-Dolan, Spokane’s first round pick in the 2014 WHL Bantam Draft, were each credited with assists.

Tyson Verhelst started for Team White and blocked 12 of 13 shots in 30:06 of ice time. Matthew Berlin rotated in midway through the second period and was a perfect 9 for 9 in save chances in the final 29:54.

Immediately following the game, brothers Keanu and Kailer Yamamoto were honored with the Don Kiehl Memorial Awards as the “Players of the Game” for Team Red and Team White, respectfully. The annual award was created last season to recognize long-time off-ice official and friend of the organization, Don Kiehl.

The Chiefs are expected to narrow their roster this week in preparation for their first WHL Preseason games, in Everett over Labor Day Weekend. The Chiefs host their only home preseason game on Saturday, September 19 against the Tri-City Americans at Spokane Arena. Tickets are available now for $10 through the Chiefs’ Ticket Office in-person or over-the-phone at (509) 535-PUCK.

The Spokane Chiefs open the 2015-16 regular season with Bud Light Opening Night on Saturday, September 26 at Spokane Arena. Ticket packages are on sale now and start as low as $110. For more information, stop by the Chiefs’ Ticket Office in-person on the southeast corner of Spokane Arena, call (509) 535-PUCK or visit www.spokanechiefs.com.